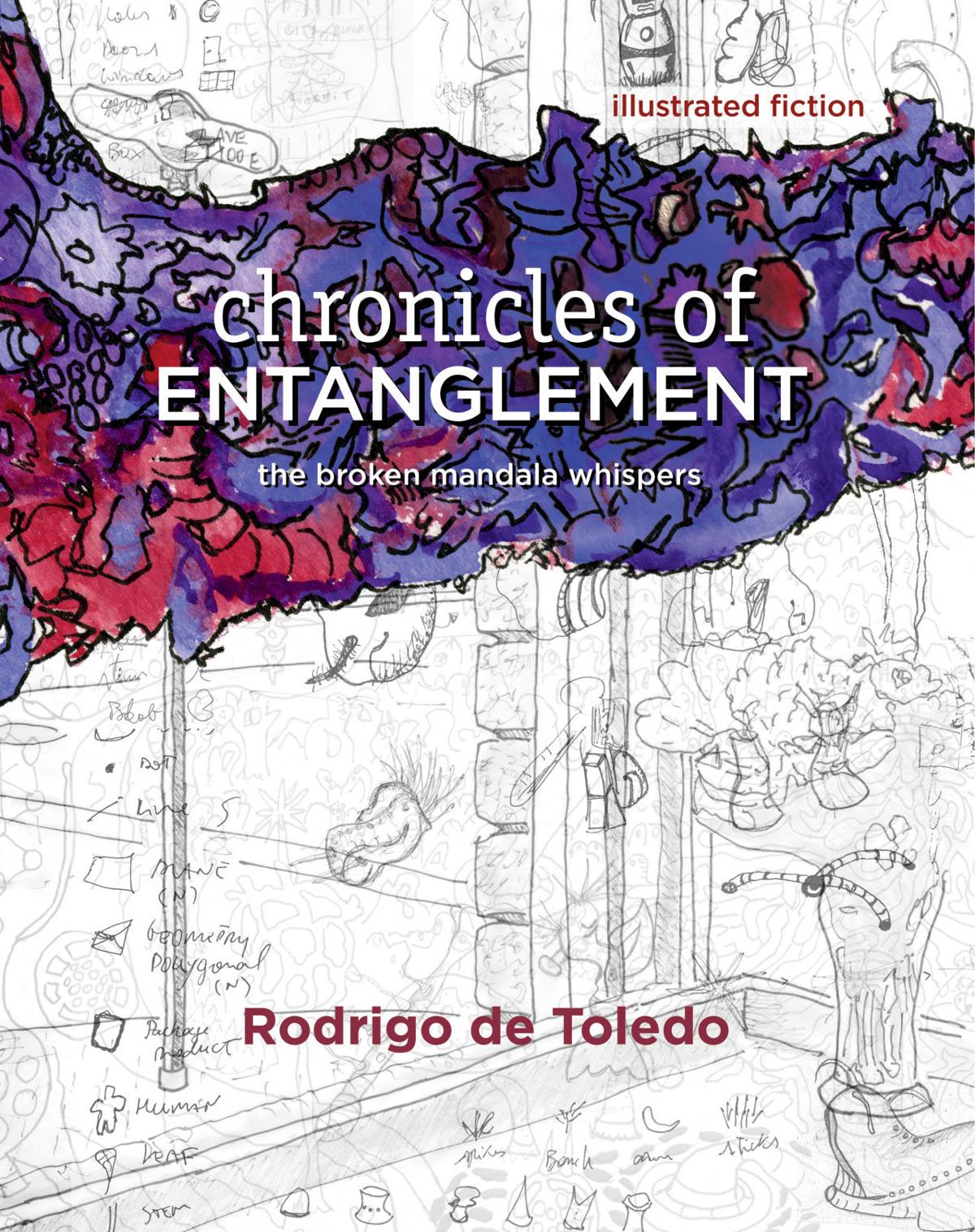 Chronicles of Entanglement: The Broken Mandala Whispers is available through Studio Neurondiva. 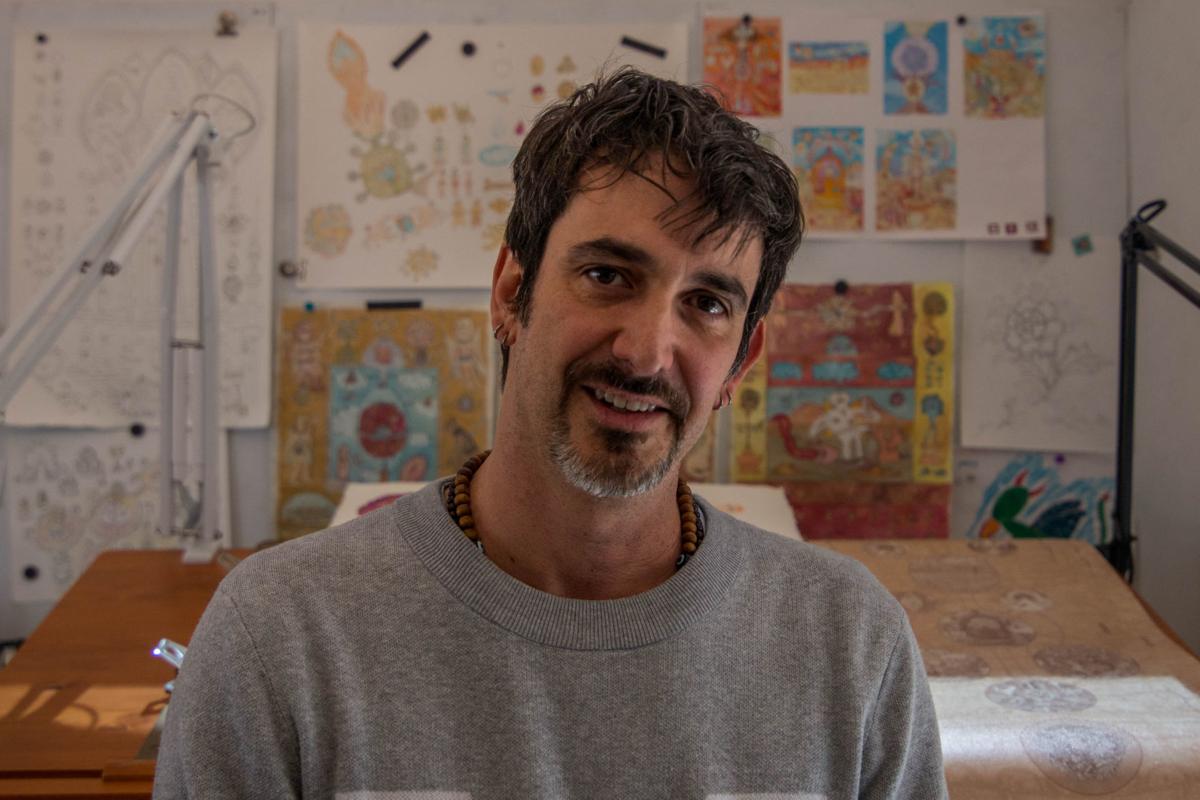 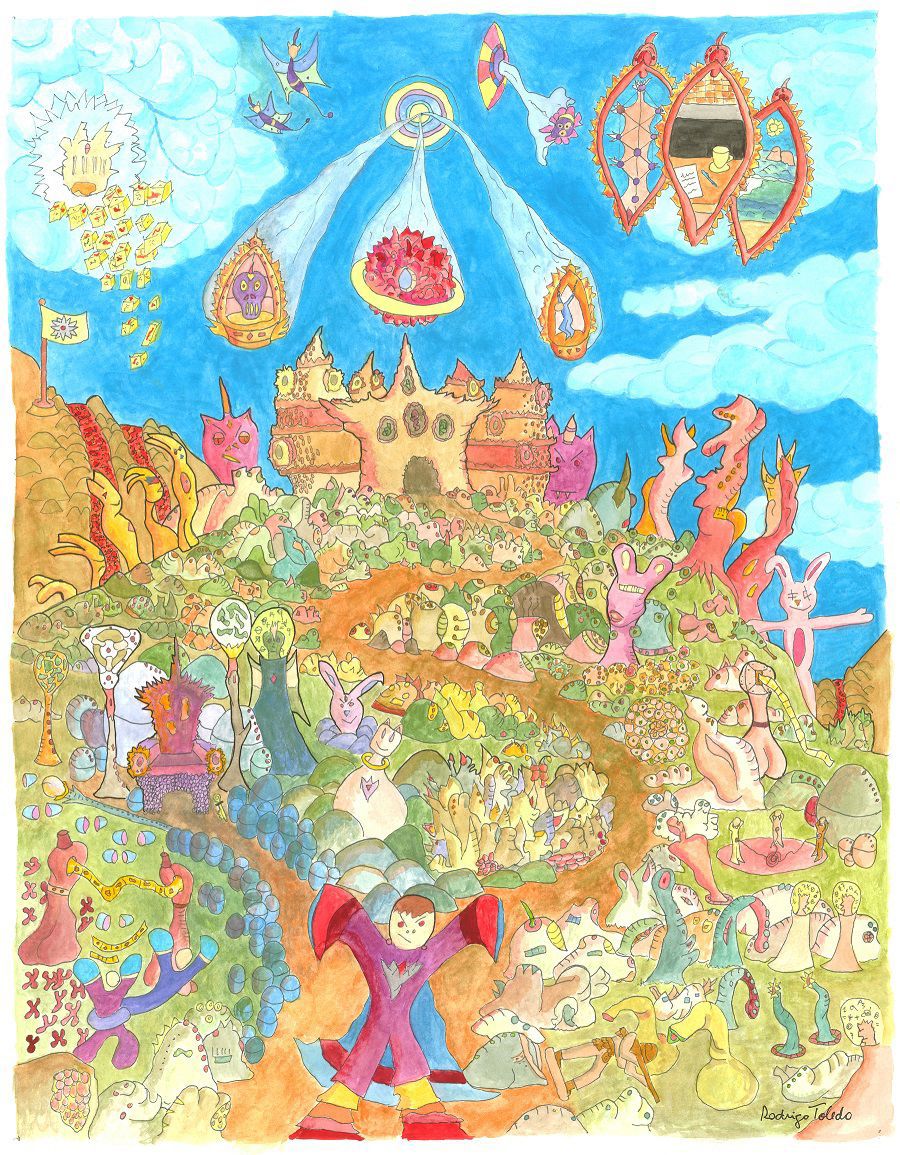 Rodrigo de Toledo is fascinated by two things: fantasy and psychology. So it would only make sense that the Brazil-born artist, graphic designer and Northern Arizona University professor would incorporate those ideas into his art.

“I’ve always been interested in fantasy and psychology. My work has been a little bit surreal, a little bit pop surrealism,” said Toledo. “So it was a natural progression to get involved with [Carl Gustav] Jung, creative imagination, collective unconsciousness.”

His latest book, “Chronicles of Entanglement: The Broken Mandala Whispers,” and an exhibit of the same name expands on his interest in Jungian psychology to tell a story of purpose, art and the subconscious existence.

Part graphic novel, part artistic biography and part illustrative fiction, “Chronicles of Entanglement” features scenes from the real life, or the present, in Flagstaff, particularly the Rendezvous at the Monte Vista Hotel. The Seeker watches life in Flagstaff through the glass windows of the Aquarium, as it’s referenced to in the book.

Though “Chronicles of Entanglement” was published in early 2017, Toledo said now was the time to hold an official book release and exhibit. For one thing, he wanted to share his love of Flagstaff. Another, after 15 years living in Flagstaff, he finally felt he belonged.

“I’ve been in the U.S. almost as much as I’ve been in Brazil, so that acculturation, becoming part of here and feeling like a foreigner, was something I felt for a long time,” he said. “Artists by nature feel like an outsider, observing the world, that feeling of belonging but not belonging, sort of walking around and feeling like a ghost, here but not here. I want to feel here. I want to be out of the ghost approach. In bringing this work to Flagstaff, I feel here, like a part of Flagstaff.”

Because his studio was near the bar, Toledo said he figured he would use that as the setting for the book. While the Seeker enjoys a drink, a distorted vapor from a manhole manifests itself, projecting him into various mythical worlds such as The Desert, the Valley of the Muse and the Boy’s Realm.

“When I look at my own subconscious, that’s what comes out. I have a personality that is artistic and intuitive and imaginative, but at the same time I’m quite logical. So this mythology aspect I think comes into play because it’s a structure. I feel the need to put structure into my imagination. It’s a self-knowing, growth, spiritual type of process. It’s a drive of knowing myself.”

Along with the written narrative of the book, Toledo has created a series of paintings and prints made with gouache and ink on watercolor paper called Mythological Entanglement. Inspired by Tibetan artwork and the Dutch painter Hieronymus Bosch, as well as comics, cartoons and Japanese manga, Toledo’s paintings are busy landscapes of an anxious mind where not even the smallest detail is overlooked.

Toledo envisions the waking life in Flagstaff in black and white images, but the mythological world juxtaposes this with imagination and vibrancy, at first glance innocent and childlike, then upon further observation is unsettling and wrought with strange imagery. The reoccurring symbol of the boy and themes of childhood lead us to believe the book is something for a child, but the ideas presented in “Chronicles of Entanglement” bridge on deep understanding of our unconscious selves — unconscious selves that are primal and animalistic.

Though not wholly about childhood, Toledo says the artwork and the book draw from the effect that period of existence has on our subconscious for the rest of our lives.

“Childhood is, psychologically speaking, a very powerful source of inspiration. In working with that inner material, childhood memories, it opens up a lot of inspiration and creativity,” Toledo said. “I’m dealing more with how one’s mental, psychological landscape is formed or is represented, and childhood is a strong element to this.

“It’s all metaphorical,” Toledo continued. “To me, art and spirituality are connected. It’s a way to really grow, evolve, spiritually, and I believe that’s by knowing yourself.”

Everything means something to Toledo. Whether those meanings are conscious or unconscious, we are motivated by them to act in certain ways and say certain things. We behave in the way that we do because of these symbols and archetypes presented in the subliminal mind. In seeking to understand that seemingly autonomous and enigmatic world, Toledo seeks to better understand his spiritual life, to give structure to a fluid and pliable entity that is inherently without a structure, to discover and explore his psychological landscape.

Chiara Ferragni to star in a new reality show

Phil Collins confirms next Genesis tour will be his last

Phil Collins confirms next Genesis tour will be his last

The psychological landscape: Chronicles of Entanglement explores purpose, art and the subconscious existence

On a wall of Rodrigo de Toledo’s home, plastic toy legs dangle out of an old wooden frame with multiple compartments. The gold and red of the …

Chronicles of Entanglement: The Broken Mandala Whispers is available through Studio Neurondiva.