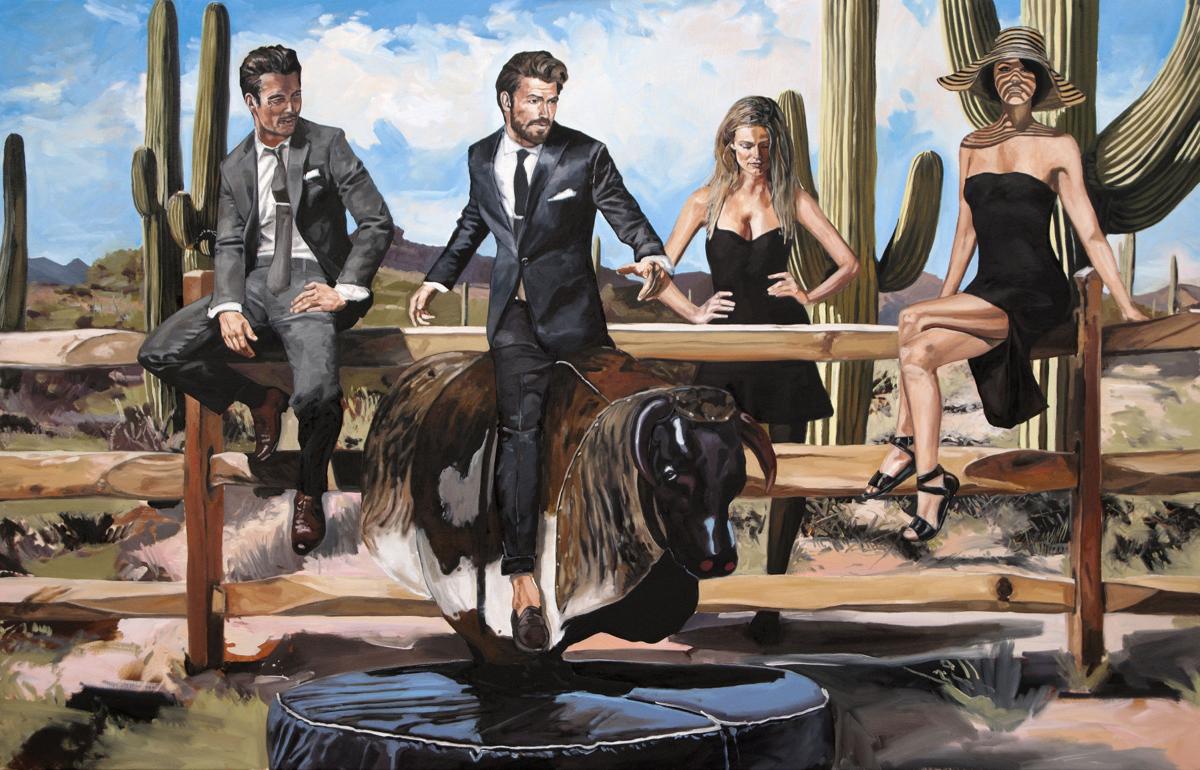 "A Place for Jane" by artist Tracey Stuckey. His work will be on display at the NAU Art Museum Jan. 31-March 9. Courtesy image. 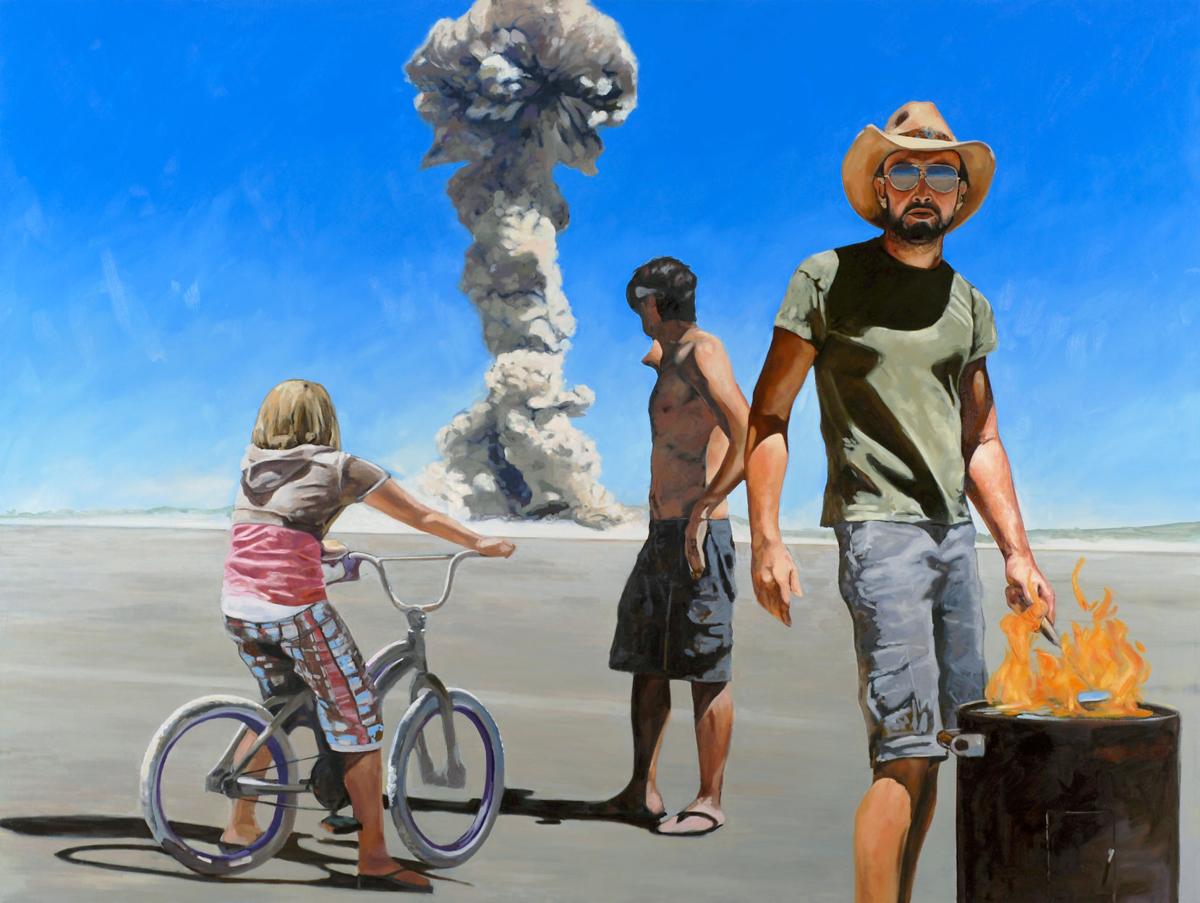 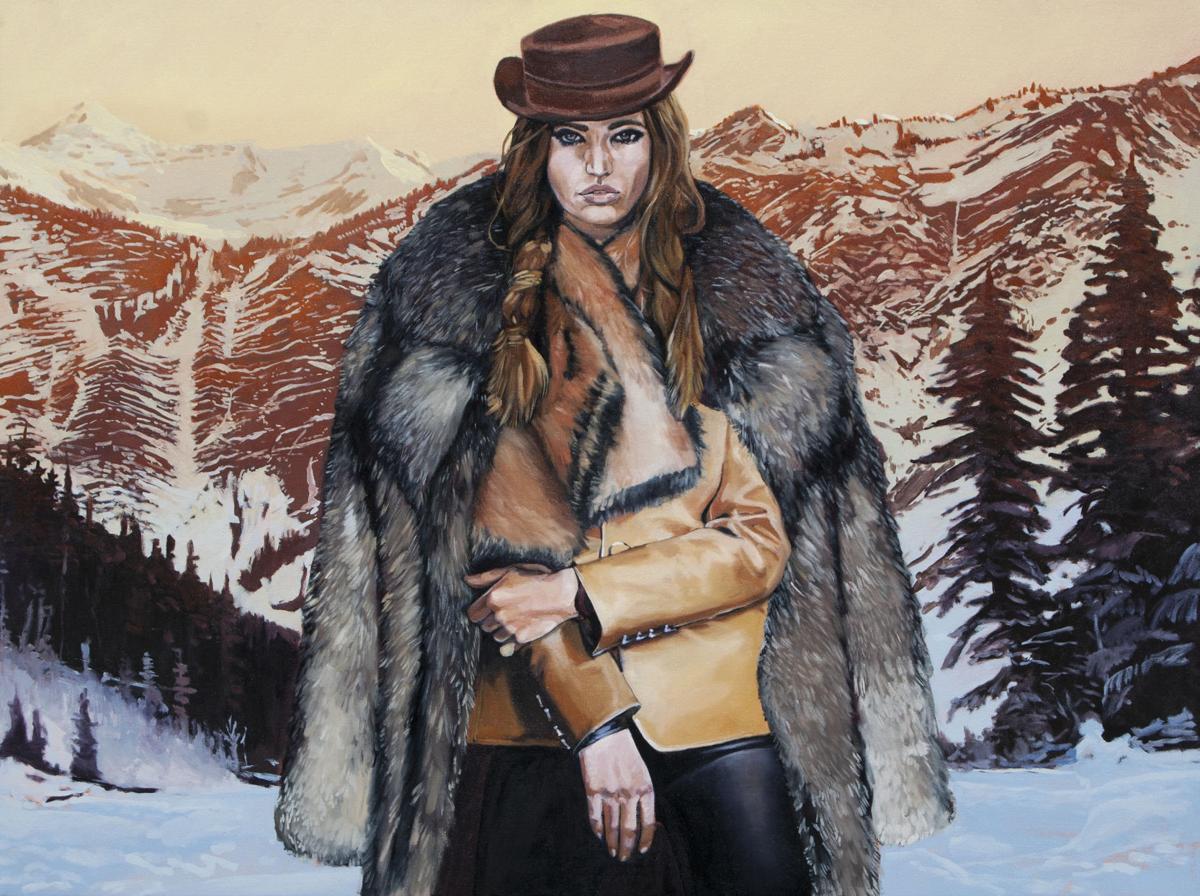 "Hers" by Tracy Stuckey.

In the Tracy Stuckey painting “A Place for Jane,” fashion-forward men and women are poised at a fenced-in riding pen while one of them suavely rides a mechanical bull.

The landscape behind them is Sonoran desert, and the oddity of the posturing and of one of them riding what’s the representation of the bull gives the painting both a humorous and unsettling quality.

The scene contrasts the imagery of the classic American West with the “New West” — where wealthy people adopt Western ethos against extravagance as seen in places such as Scottsdale and Sedona. This is the realm in which Stuckey traffics, as he looks for the odd juxtapositions of the West between the past and present, between reality and myth.

The Northern Arizona University Art Museum’s exhibition of this and other works will appear in “Stranger in These Parts: Recent Paintings by Tracy Stuckey.” It’s on display from Tuesday of this week through March 4.

A public lecture and presentation with the artist is from 4 to 5 p.m. Thursday, Feb. 2 in the museum, located in historic Old Main on the Flagstaff campus. Learn more about gallery hours, parking and general information at www.nau.edu/cal/art-museum/.

“The American West has always been as much an idea as a reality,” said Dr. George Speer, Director of the NAU Art Museum. “Stuckey’s paintings investigate the region as a ‘brand’ shaped by romantic images, as an imaginative territory embodied in iconic figures such as John Wayne and the Marlboro Man. His canvases offer pointed satires of the exploitation of the region.”

He added, “Apart from their humor, however, Stuckey’s works investigate with considerable seriousness the impact of our continued exploitation of the West, a region that seems eternal and enduring, but is, in fact, vanishing under environmental and population pressures.”

In a recent email exchange with the Arizona Daily Sun, Stuckey explained his approach to creating those juxtapositions between the imaged and the real in his work and how his view of the West has influenced his approach.

“I think part of it comes from the fact that I didn’t grow up in the West — I never set foot west of the Mississippi until I was in my 20s,” he shared. “I grew up with a strong fascination with the West and its portrayal in movies, music and advertising. I try to look at it still as a tourist.”

He continued, “I’m a victim of the idealization and romanticism of the West, so in my work I’m using that idealization while also trying to dismantle it. Often times I will simply take a story or aspect of the romanticized ‘Old West’ and just try and think of how it would be played out today.”

In other representations of his work, he shows women in bathing suits and holding garden hoses next to their swimming pool while a slurry bomber tries to dowse a wildfire raging in the background. Another pool scene shows a man dressed as a wealthy, nouveau-cowboy while a bison lounges poolside.

“Fire and water are underlying aspects of the fragile and hostile environment of the West,” he noted. “I think most people don’t pick up on that. The environment actually becomes a character in the paintings. I try not to hit people over the head with it, but it’s a bit absurd to have a swimming pool in the desert.”

Stuckey’s paintings — in some cases very simple juxtapositions of fashion-model types with mountainous or wilderness backgrounds — set loose any number of ways to engage or understand the work. This sideways look at the West opens up the complexity of our relationship to the place.

“I want my paintings to be entertaining on some level,” Stuckey said. “I feel like that leaves an open door for viewers to enter into a dialogue with the paintings in order to figure out what is going on … Often I’m worried that people won’t understand the work, or they might just lump it in with other Western art. Usually people read it the right way, though.

"One of the best compliments I received was when someone said my painting looked like a still frame from a Quentin Tarantino film.”

The Northern Arizona University Art Museum’s exhibition of “Stranger in These Parts: Recent Paintings by Tracy Stuckey" is on display from Tuesday of this week through March 4. Learn more about gallery hours, parking and general information at www.nau.edu/cal/art-museum/.

The Flagstaff Arts Council announced its 2020 Viola Awards nominees Sunday morning. Among the many nominees were the Museum of Northern Arizon…

In 2018, award-winning playwright Jeffrey Hatcher—writer of the Tuesdays With Morrie stage adaptation among others—revived the story of Sherlo…

"A Place for Jane" by artist Tracey Stuckey. His work will be on display at the NAU Art Museum Jan. 31-March 9. Courtesy image.

"Hers" by Tracy Stuckey.