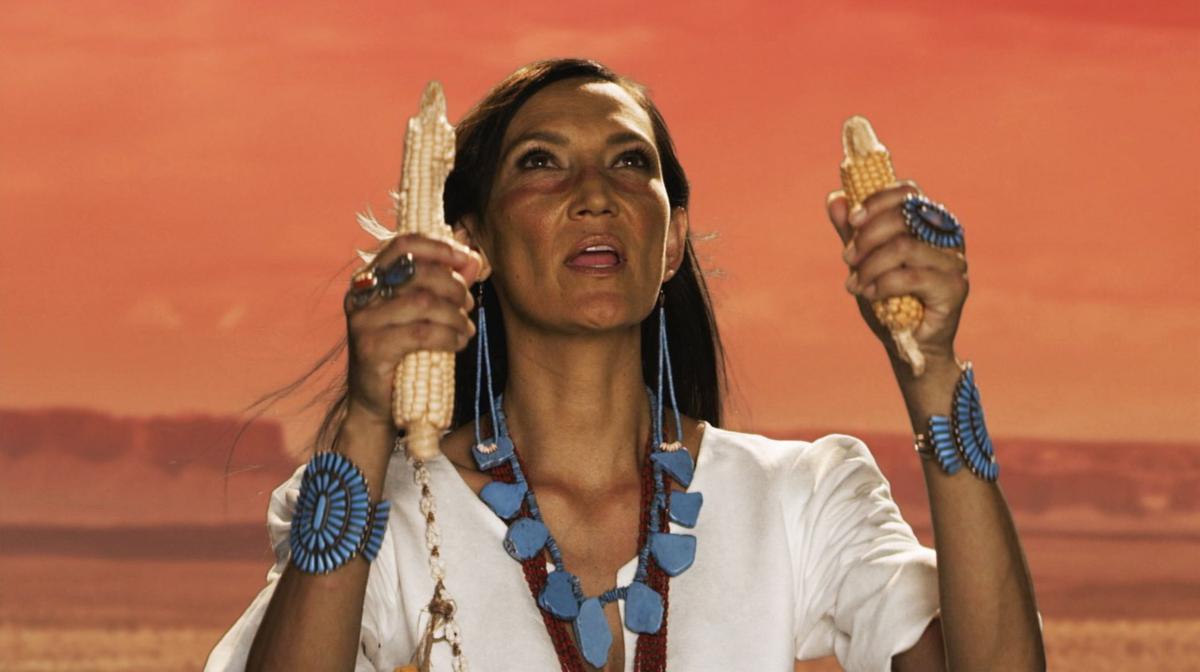 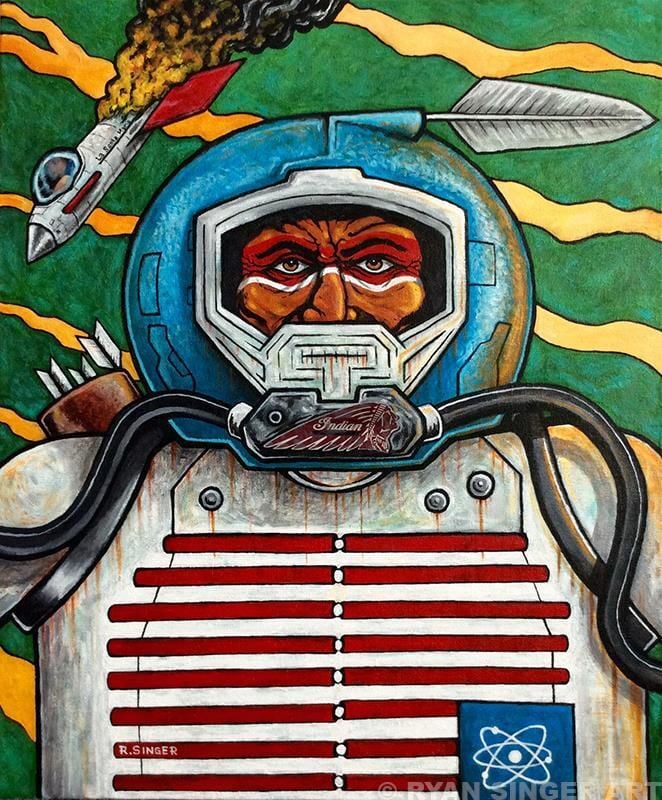 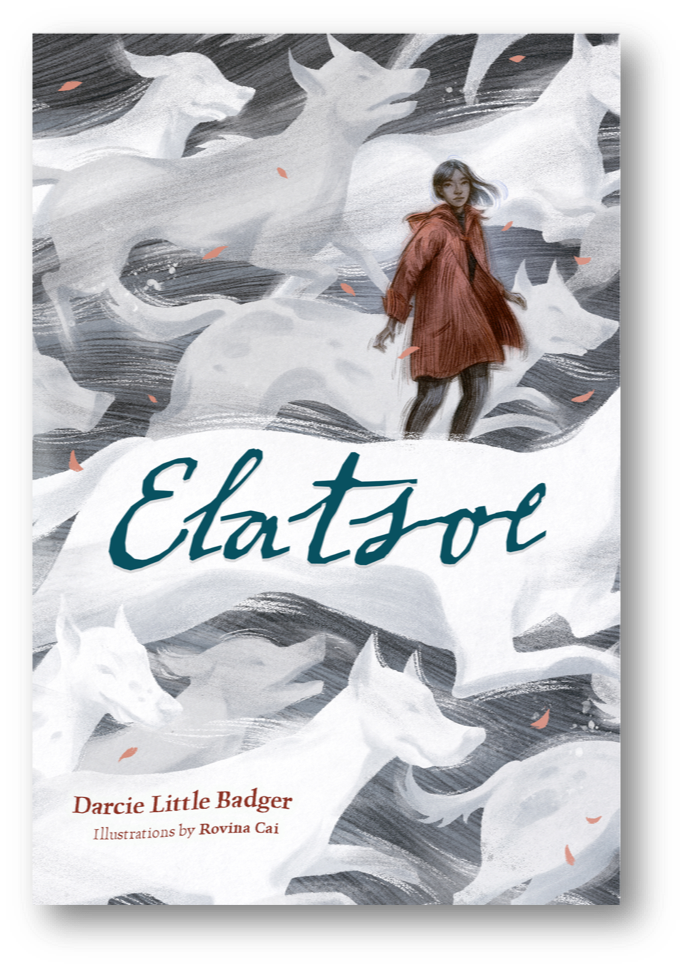 Nanobah Becker’s short film “The 6th World” opens with a dream as the camera pans across a barren, red landscape save for a field of dried corn stalks on their last legs under the unforgiving sun. In the waking world, Diné (Navajo) astronaut Tazbah Redhouse is preparing for a mission to Mars where she will be tasked with colonizing the red planet, but the foreboding dream lingers in the back of her mind, perhaps hinting at trouble to come.

The film—which features Flagstaff’s Jeneda Benally as Redhouse—came out 10 years ago and has since become an integral part of the growing Indigenous Futurisms movement, something Becker sees as an important resource.

“Film is a great way to communicate across languages and cultures,” the Diné filmmaker said. “We get to see our similarities and that we’re more connected than people want us to believe. As far as this kind of sci-fi Indigenous [film motif], there’s more and more coming out—at the time, I had other films that inspired me, but nothing like how it is today.”

She cited Tsilhqot'in filmmaker Helen Haig-Brown’s short film “The Cave,” which came out in 2009, as early inspiration to explore Indigenous storytelling within sci-fi settings. In the years since, blockbusters like Star Wars: A New Hope and Finding Nemo have been translated into Diné Bizaad, the Navajo language, adding to the growing list of art with representations of Indigenous culture.

The term Indigenous Futurisms was coined by Dr. Grace Dillon, an Indigenous studies professor at Portland State University, to highlight art placing Indigenous people in futuristic settings as opposed to the historical landscapes in which many might typically imagine them. On Tuesday, May 4, the Museum of Northern Arizona’s Anthropology Collections Manager, Tony Thibodeau, will host a virtual panel with Becker, IndigiPop X founder Dr. Lee Francis (Pueblo of Laguna), artist Ryan Singer (Diné) and author Darcie Little Badger (Lipan Apache) to discuss their contributions to the movement beginning at 2 p.m. on Facebook Live.

“I wanted to invite creators representing a broad range of media,” Thibodeau, who curated MNA’s The Force is with Our People exhibit in 2019, explained.

Award-winning artist Singer contributed several paintings reimagining Star Wars through an Indigenous lens to that exhibit, and said he has been making art his whole life, developing a style that combines pop culture with traditional imagery.

“All those pop culture images, sci-fi, horror movies, video games, I was always copying things, drawing things that I could relate to, and Star Wars was always kind of there,” he said. “Since I was about 4 years old I would be drawing TIE fighters and Stormtroopers and Darth Vader.”

Singer is currently working toward his BFA in fine arts and has continued incorporating these interests into his art using the techniques he’s learning in class. A series of paintings he’s been working on this spring uses toys he remembers from childhood to depict traumatic experiences within Navajo history like the Long Walk and forced assimilation in boarding schools.

“I wanted to talk about these events that left generational trauma,” he said of the series, which features Legos, brightly colored alphabet magnets and more. “Everyone who has experienced trauma has to figure out a way to get through whether it's therapy, whether it's meditation, art, playing music, they somehow learn how to cope with that trauma and survive, so that’s what the series was all about. The Navajo people were resilient, and persevered. They endured a lot and they were able to adapt.”

For Little Badger, who holds a PhD in oceanography, she chose to instead pursue her writing career as a way to share stories of her tribe. Her debut novel Elatsoe was published by Levine Querido in 2020, and it has since gone on to receive multiple starred reviews as well as inclusion in best-of lists from the likes of Publishers Weekly and Time Magazine. But more than those recognitions, Little Badger is grateful for how it’s resonated with readers.

“I've received so much feedback from readers on Twitter or Instagram or emails,” she said. “Just seeing how it's impacted them, how it's made them happy or how they've connected to parts of Elatsoe, especially Native readers, is the best part of publishing the book.”

The titular character in Elatsoe, Ellie for short, is a 17-year-old Lipan Apache girl who can raise the ghosts of dead animals, a skill that has been passed down through her family. Part mystery and part fantasy with instances of folklore woven throughout the story, it was important to Little Badger to incorporate some of her people’s history that wasn’t taught in her high school history classes despite being in Texas, one of the Southwest regions where the Lipan Apache people were and still are prevalent.

“It wasn't the fact that we weren't documented, there was a lot of documentation, it's just that it's not being taught,” she said. “And it’s a constant fight. We had to fight at the federal level to be able to use eagle feathers in our cultural practices, and actually we're the first state-recognized people to have that right. It took nearly 10 years and we just really had to prove over and over again that, yes, we’ve been here, we're still here.”

Becker has seen a similar omission of recognition in California, where she currently lives.

“The native people of Los Angeles are practically invisible, and media doesn’t help with that,” she said. “I don’t know of any movie with a single Tongva person—or any native of Southern California. The fact that Indigenous stories aren’t being heard lends to the idea to the outside world that not only do we not exist, that we don’t matter.”

Becker, a self-proclaimed “movie nerd,” didn’t consider filmmaking as a career option in school although she took a few film theory classes while pursuing her bachelor’s degree in anthropology. It wasn’t until placement in an AmeriCorps program working with young children on the Navajo Nation that she realized there was little—if any—Indigenous representation in media.

“Thinking about the kids back then and what they had to relate to, it was just upsetting to me that there was nothing they could look at and say, ‘That looks like us, that makes me strong and confident, like I’m a person, I matter,’” Becker said. “Maybe people aren’t thinking that consciously, but subconsciously when you’re completely absent in film and TV, it’s shocking to see a native person, at least to me, and that’s a bummer.”

Instead, the images in the minds of many people around the world end up being clichés of Indigenous people from old Hollywood Westerns.

“Freezing any culture—especially Indigenous culture—freezing that in time I think is a mistake because you really have to look at how those cultures are affected, for better or for worse, by contemporary society and other cultural events,” Thibodeau said.

“If you go to the Midwest, people think that all the natives are all dead. It's sad how American culture has swept most of the real Native American culture under the rug and kind of made them into curio shop toys or artifacts,” Singer said. “It is good that Indigenous people are stepping up and voicing their opinions and telling their own stories of who we are and where we come from and what we're about.To be an artist representing that is important.”

Tune in to the Indigenous Futurisms panel discussion Tuesday, May 4, at 2 p.m. on the Museum of Northern Arizona’s Facebook page, www.facebook.com/musnaz.

Khloe Kardashian and Tristan Thompson have broken up again

Khloe Kardashian and Tristan Thompson have broken up again