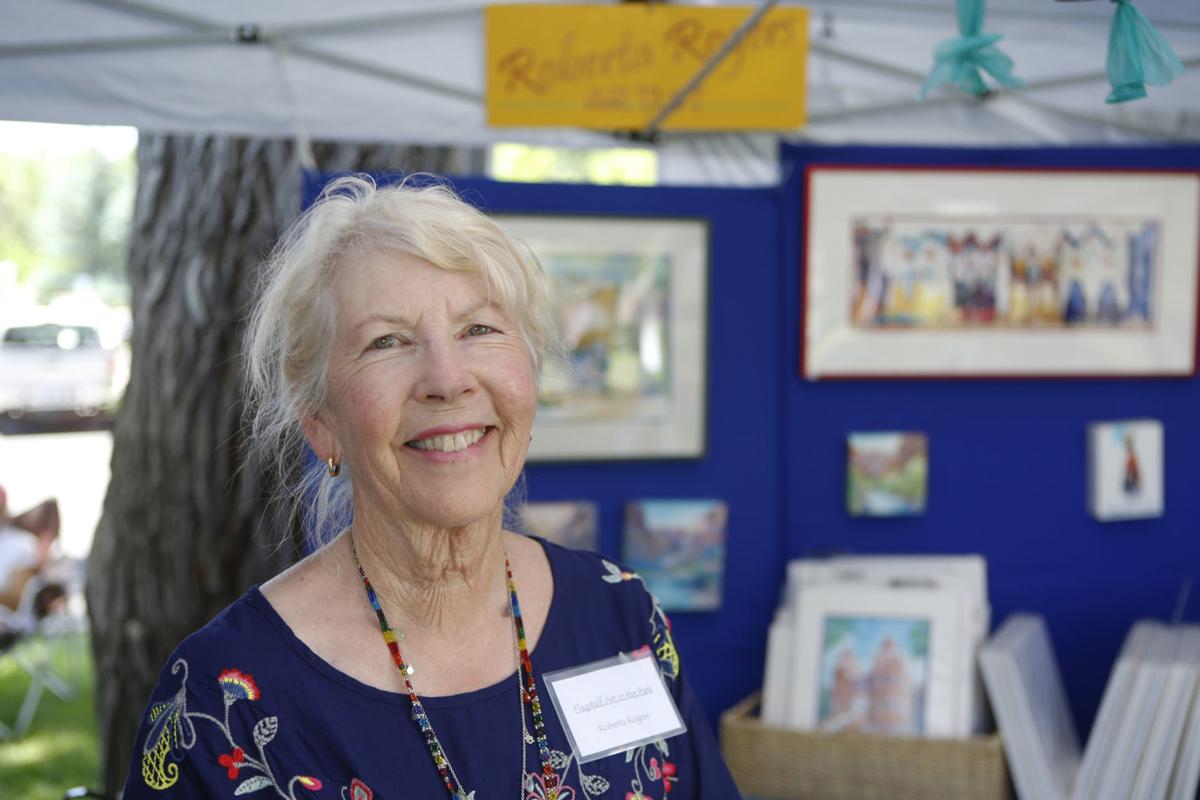 Tubac based artist Roberta Rogers displayed her art this weekend during Art in the Park at Wheeler Park. 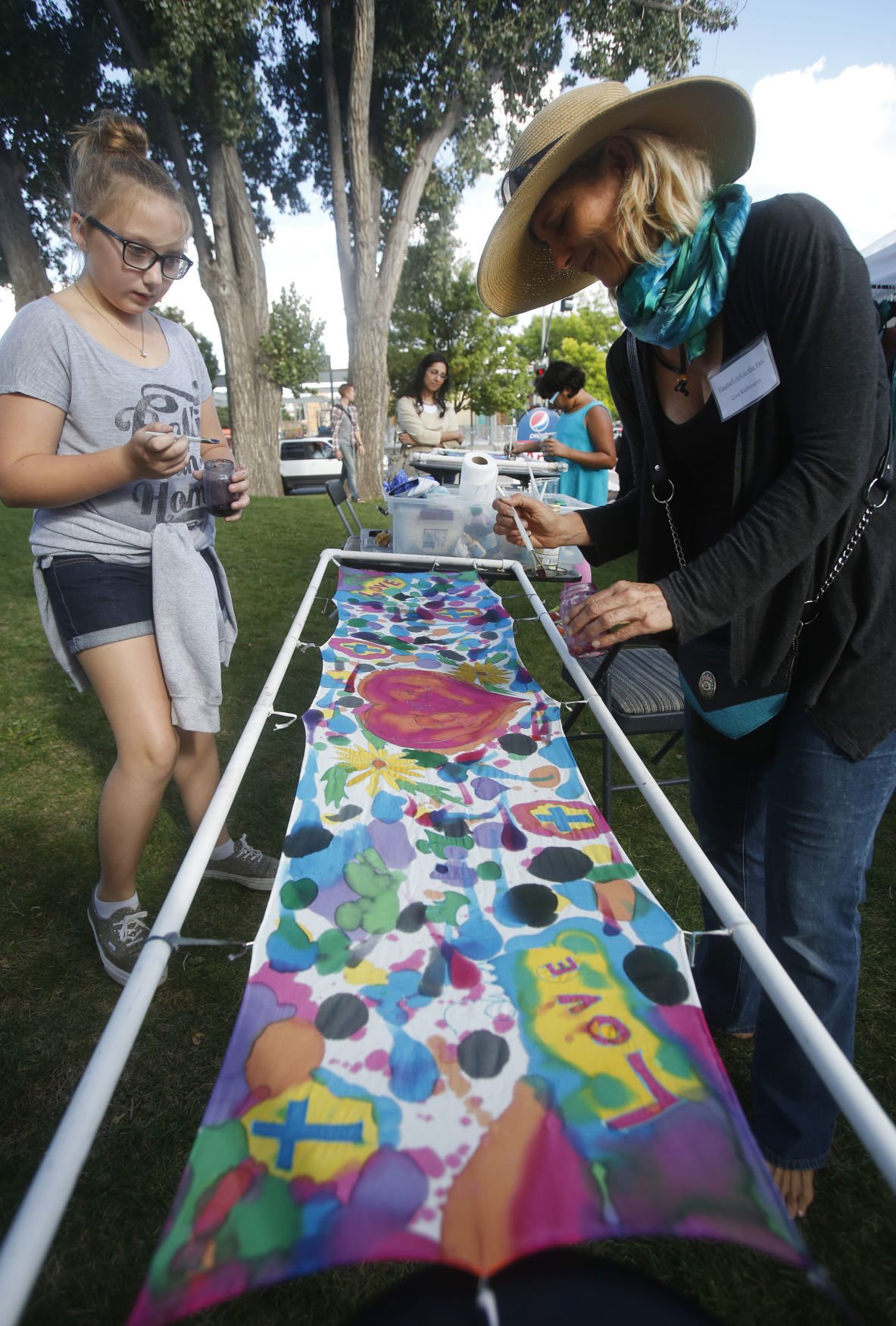 Artist Gina Richman, right, paints on a large piece of silk with Kenna Moore, 12, left, during Art in the Park in 2016.

Tubac based artist Roberta Rogers displayed her art this weekend during Art in the Park at Wheeler Park.

Artist Gina Richman, right, paints on a large piece of silk with Kenna Moore, 12, left, during Art in the Park in 2016.

A version of this story appeared in the Arizona Daily Sun’s Summer Visitor Guide 2019 Volume 3.

ART IN THE PARK

It’s been a Fourth of July weekend tradition for 13 years and a Labor Day weekend tradition for 27. It’s the biannual Art in the Park, Flagstaff’s one-of-a-kind fine arts and crafts show juried and shown by local and regional artists. Taking place again at Wheeler Park, the site is central to Flagstaff — directly across from Flagstaff City Hall and just west of downtown, making it a prime location for a full weekend of art, food, drinks and music.

A ceramicist himself, Art in the Park organizer Stu Wolf formerly worked as a geophysicist in the oil industry, but was always what he called “a closet artist.”

Wolf has been the sole organizer and juror for Art in the Park for 22 years. He begins planning the two yearly events as early as January, booking all the musicians and vendors on his own, but it’s a labor of love, he said.

“We’re a little unique in that regard. It’s very personal and I know all these artists well; many of them are my good friends,” Wolf said.

Art in the Park proves time and time again to be a viable way for artists to make money, something that isn’t a given in today’s art world, a place dominated by gallery fees and other cost barriers that block artists from even getting their art displayed. This is measurable in the fact that so many of the artists who set up booths at the event have been coming back every year for 27 years.

Ceramicist Joni Pevarnik and watercolor artist Roberta Rogers are among those tried and true Art in the Park creators who have been displaying their work at the festival since day one. There will be 100 booths set up with art for sale this year with several of those being participants who have returned for at least the last 10 or 15 years.

“It’s a hard life for some of these folks, but they’re driven by their creativity and they like meeting the customer and the customer likes meeting the artists. They hear their stories and then when they hang a piece on their wall or maybe around their wrist, they’re more connected to it because they know the person who made it and that is kind of rare these days,” Wolf said.

This year’s Art in the Park will feature a new beer garden as well as live music, food and local vendors.

The Coconino County Fair is a 70-year-old Flagstaff tradition, serving as a staple of community, education, arts and entertainment since 1949.

The colorful event is much more than just its dizzying rides and funnel cakes. It’s also a place to immerse oneself in the arts. From music to visual art, the fair is a longstanding haven for creators, hiding behind the flashing lights and revelry.

Central to this year’s fair will be a performance by Grammy award-winning ensemble Nitty Gritty Dirt Band, made up of Jeff Hanna, Jimmie Fadden and Bob Carpenter. A fixture of the 1970s and fresh off their 50th reunion tour, Nitty Gritty brings the sounds of American roots and old country back into cultural consciousness.

The band has garnered multi-platinum and gold records as well as Top 10 Billboard hits, including “Fishin’ in the Dark” and “Mr. Bojangles.” In addition to their two Grammies, which the band won in 1989 for the album “Will the Circle Be Unbroken: Volume Two,” Nitty Gritty also has several CMA awards to their name. “Will the Circle Be Unbroken: Volume Two” featured Earl Scruggs, Johnny Cash, The Carter Family and Emmylou Harris, John Prine, John Denver and more. The 1972 album that came before it has been catalogued into the U.S. Library of Congress as well as the Grammy Hall of Fame.

Come Labor Day Weekend, Nitty Gritty will spend time in Flagstaff just south of town on the dusty and sprawling fairgrounds among, 4-H kids auctioning off their precious pigs and calves, and children begging their parents for the bigger cup of lemonade.

Hosted by Coconino County Parks and Recreation department, the organization has teamed up with NAIPTA (Mountain Line Bus) to offer free bus services to the Coconino County Fair.

Art in the Park:

The fair will place Aug. 30-Sept. 2 at Fort Tuthill County Park, 2445 Fort Tuthill Loop. Admission to the fair is $8 for adults, $7 for military, $5 for youth (6-12) and seniors (65 and older), free for children 5 and younger. Early bird carnival wristband tickets are $25 and are good for one day of unlimited rides. Complimentary shuttle services will be offered to and from Northern Arizona University at the South Campus Parking Lot on East Pine Knoll Drive and the County Health and Community Services Building at 2625 N. King St. The shuttle stop at NAU runs all four days and the shuttle stop at the County Health and Community Services Building runs Saturday and Sunday (Sept. 1 and 2). Parking at the fairgrounds is $5. For more information and full entertainment lineup, visit www.CoconinoCountyFair.com.