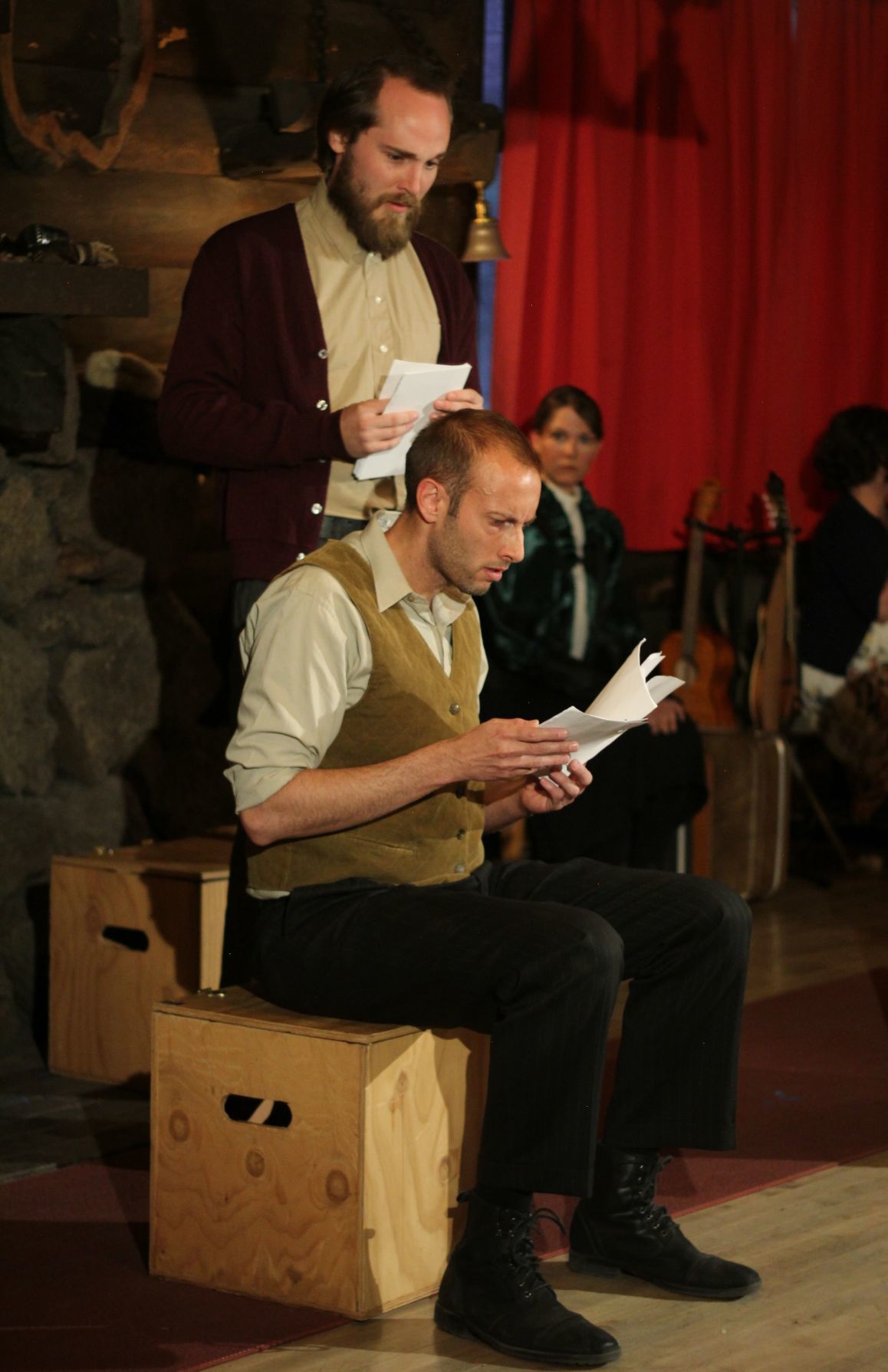 Lemml, played by Jim Dugan, reads the script for "God of Vengeance" for the first time as playwright Sholem Asch, played by Drew Leatham, looks on. 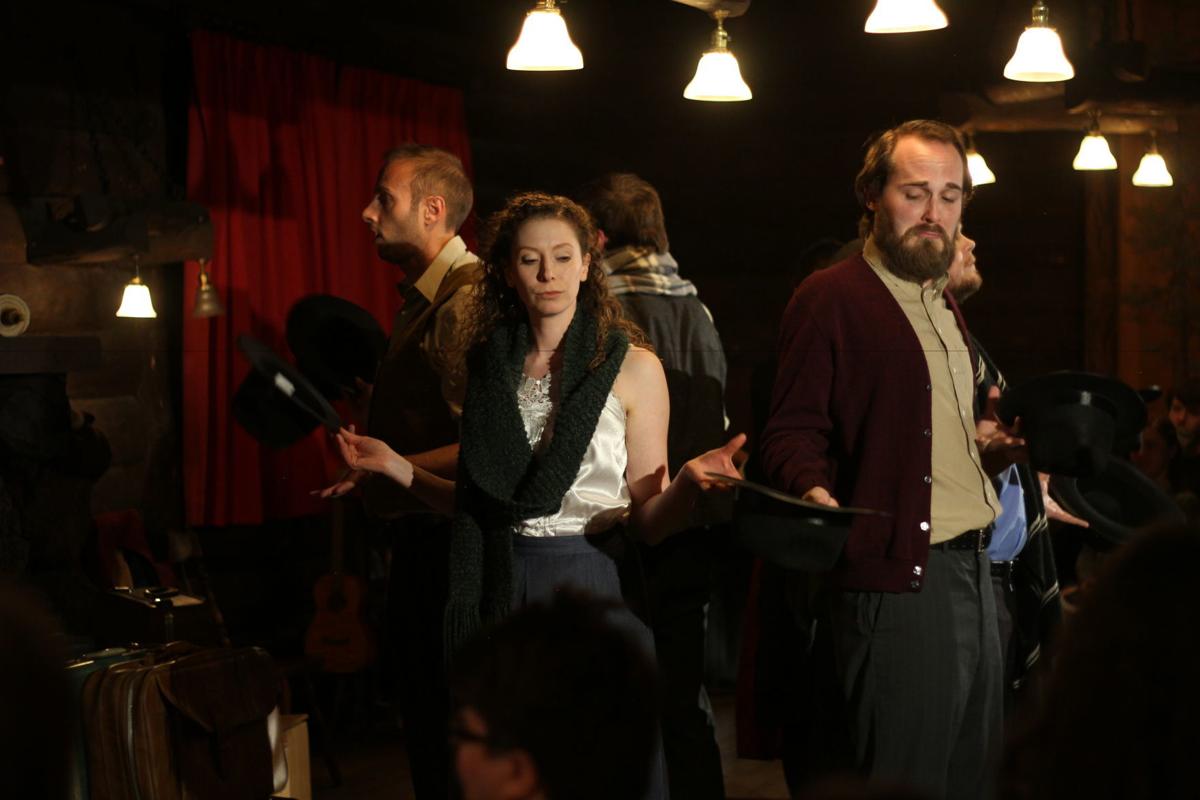 Jim Dugan, Becki Zaritsky and Drew Leatham in a choreographed scene set to the song "Vot Ken U Makh in Amerika." 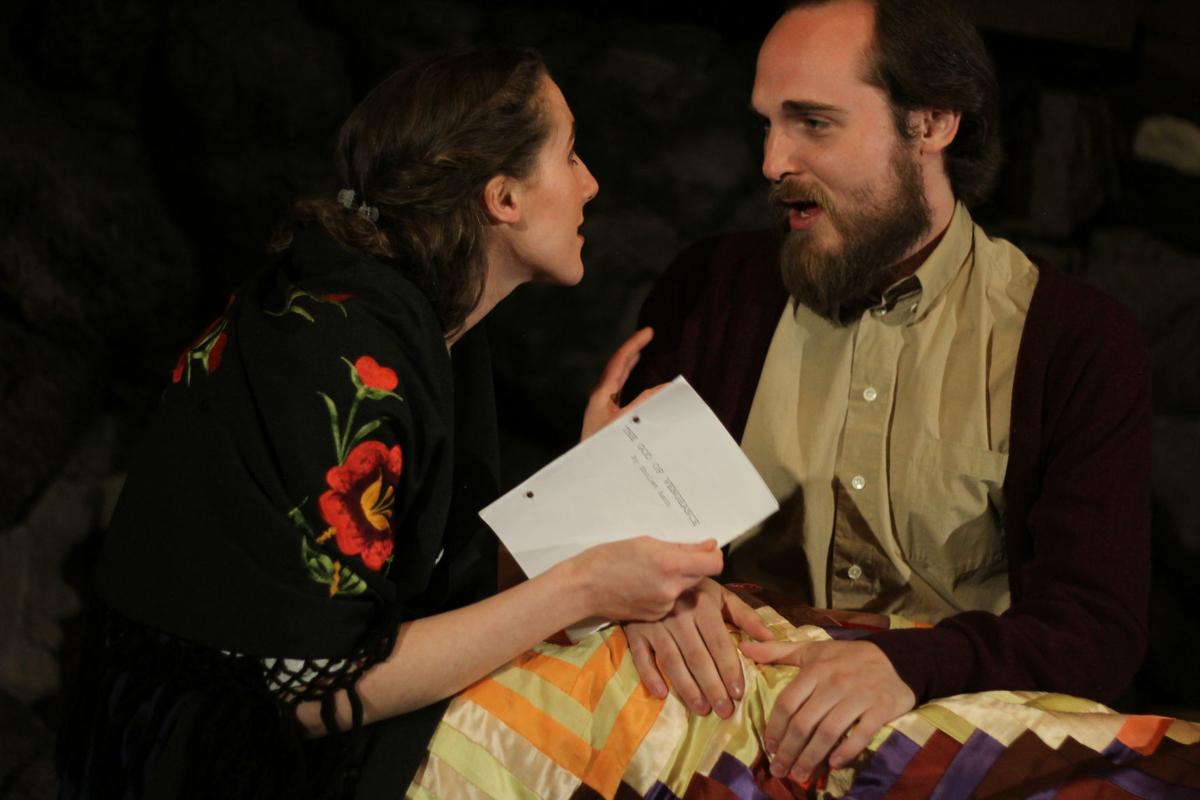 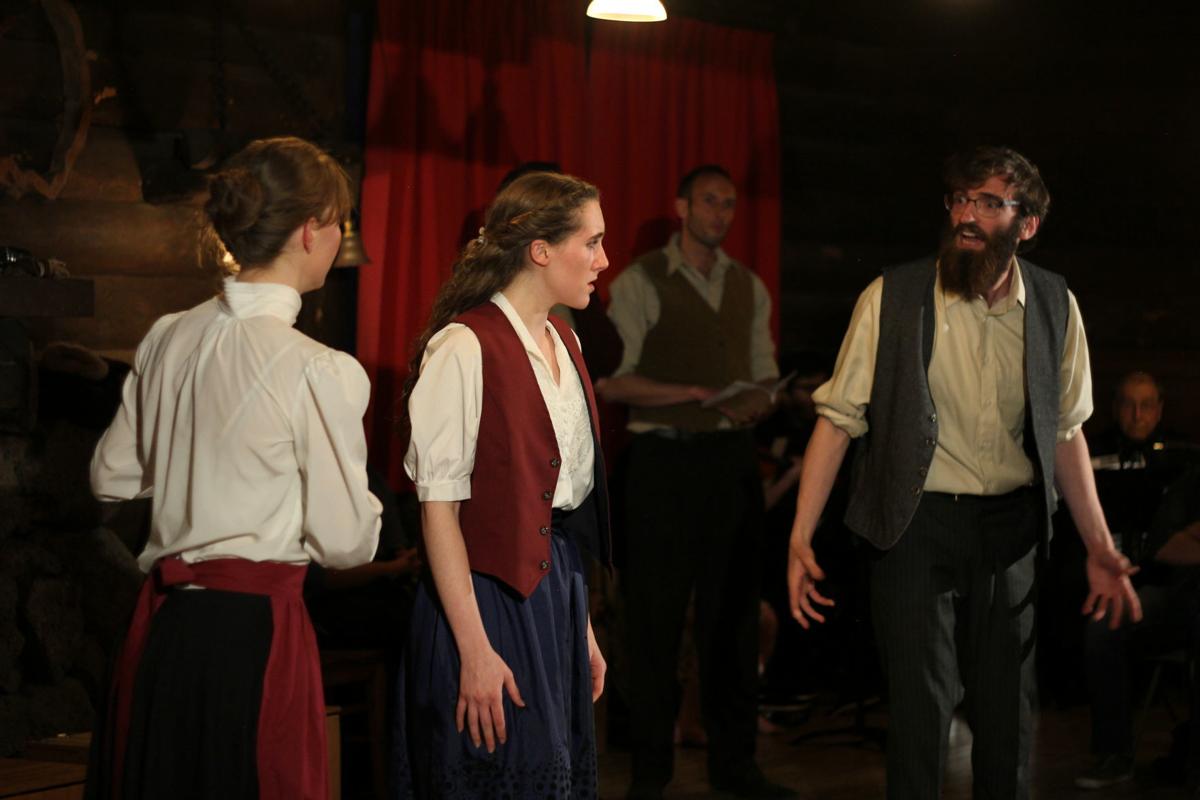 FlagShakes' production of "Indecent" was directed by Cameron Scully, right, who also played several roles including brothel owner Yankel during scenes from "God of Vengeance." 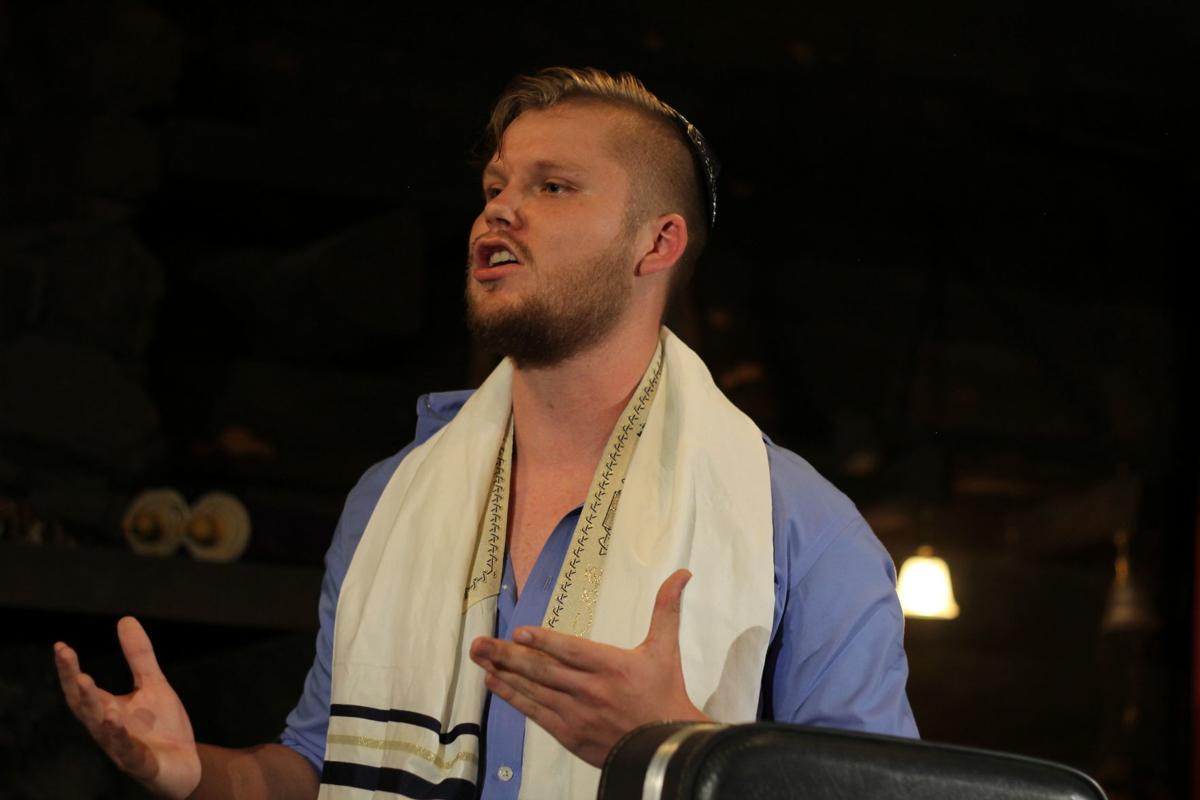 Dustin Noga, an actor from Gilbert, makes his FlagShakes debut as Mendel, along with a variety of other roles.

There’s nothing indirect about “Indecent.”

When the play begins, the cast fold themselves in various shapes and poses across the stage. Stage is not quite the right word. In the billiard room of the Riordan Mansion State Historic Park, surrounded by stone walls and lit lowly with decades-old units, there is no stage, hardly even a border between the actors and the audience. When the actors come to life, they do so like smoke above smoldering ash. As they awaken, they dance to klezmer music provided by a live trio in a shadowy corner of the room.

Lemml, played by Jim Dugan, steps forward. Under a yellow light, he says, “My name is Lemml. You can also call me Lou. I am the stage manager tonight. Usually, you can find me backstage. We have a story we want to tell you about a play — a play that changed my life. Every night, we tell this story. But somehow I can never remember the end."

Flagstaff Shakespeare Festival’s production of “Indecent,” written by Paula Vogel in 2015 and co-directed by Cameron Scully and Hannah Fontes, is morbidly mesmerizing, holding you under its weight until the very last moments, when you’ve finally understood its message, and when it’s finally ready to let go of you.

“Indecent” recounts the history of Sholem Asch’s 1907 Yiddish play “God of Vengeance,” from its debut and early success in Europe to performances in New York, where in 1923 the cast was arrested on the grounds of obscenity, to basement and attic performances in Poland as the storm of World War II looms.

Even for today’s standards, the premise of Asch’s “God of Vengeance” seems rife with controversy — a Jewish brothel owner bribes a rabbi so the rabbi’s son will marry his daughter. As his daughter falls in love with a woman, the brothel owner is overcome with pious madness.

If tackling a same-sex love story wasn’t taboo enough, Asch’s play takes a critical view toward his own religion, portraying Jews as flawed people who can become mad with religion, who hold prejudices and are imperfect. The cast and crew of the original production know the stakes. As they argue during early rehearsals about the play’s portrayal of Jews, Asch, played by Drew Leatham, says, “My soul is in these pages … Why must every Jew on stage be a paragon?”

The play, despite its controversy, is a success in Europe. Only when it moves to America does it see turmoil. In one of the most heart-wrenching parallels, the cast and crew stand in a line that cuts across the stage, excited as they board a boat to America. Later, in the 1940s, they line up in the same fashion, though this time with Stars of David affixed to their clothing, and it takes a moment, but when the truth of that scene sets in, it sends shivers.

Scully and Fontes' production, though unintentional, as admitted in the notes for the program, bears a sense of immediacy. The Anti-Defamation League recently released a report that said 2018 was the third-highest year on record for anti-Semitic incidents in the U.S. The state of Arizona saw an increase of anti-Semitic incidents by 23% in 2018. Even in Flagstaff, as recently as April, the location for the future Molly Blank Jewish Community Center, set to be the new home for Chabad of Flagstaff, was vandalized with swastikas painted on windows and carved into walls.

The anti-Jew sentiment the crew faces in “Indecent,” which inevitably shuts down their impassioned production, is not a ghost of America’s turbulent past. Scully’s production, intentional or not, reminds us what is past is present.

While the entire cast of seven shines — the actors play multiple characters — it is through Lemml’s eyes we are shown the importance of resistance to censorship, preservation of one’s culture and the disillusionment of the American Dream.

“Indecent” is intimate and immediate. It gives us history, controversy and allegory, wrapped up in a tale that is as moving as it is heart-stopping.

Flagstaff Shakespeare Company presents “Indecent” in repertory with “God of Vengeance,” now through May 12. Catch the final performance of “God Vengeance” Sunday at 3 p.m. Performances of “Indecent” take place May 9-12, Thursday and Friday at 7 p.m.; Saturday at 2 and 7 p.m.; and Sunday at 3 p.m. All performances will be held at the Riordan Mansion State Historic Park, 409 W. Riordan Rd. Tickets can be purchased at www.flagshakes.org

Flagstaff Shakespeare Festival has come a long way since its first show at Heritage Square, and for five seasons it’s been bringing the work o…

Lemml, played by Jim Dugan, reads the script for "God of Vengeance" for the first time as playwright Sholem Asch, played by Drew Leatham, looks on.

Jim Dugan, Becki Zaritsky and Drew Leatham in a choreographed scene set to the song "Vot Ken U Makh in Amerika."

FlagShakes' production of "Indecent" was directed by Cameron Scully, right, who also played several roles including brothel owner Yankel during scenes from "God of Vengeance."

Dustin Noga, an actor from Gilbert, makes his FlagShakes debut as Mendel, along with a variety of other roles.