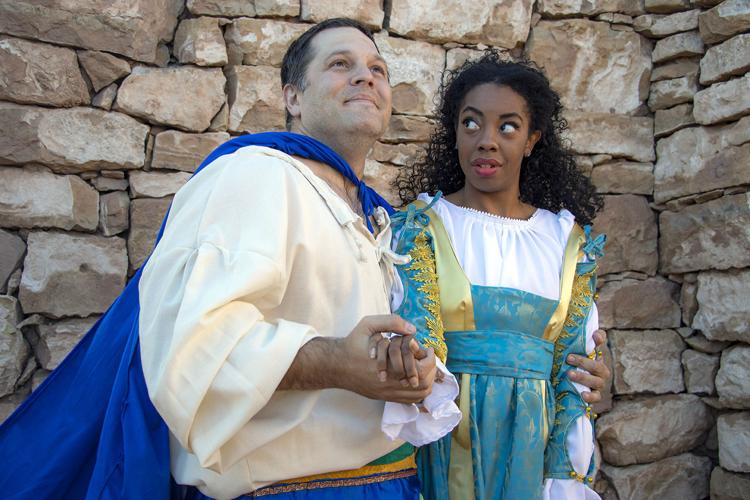 Cast members, Keath Hall (left) and Ryan Jenkins perform as Petruchio and Katherine, respectively, in FlagShake's production of "The Taming of the Shrew." 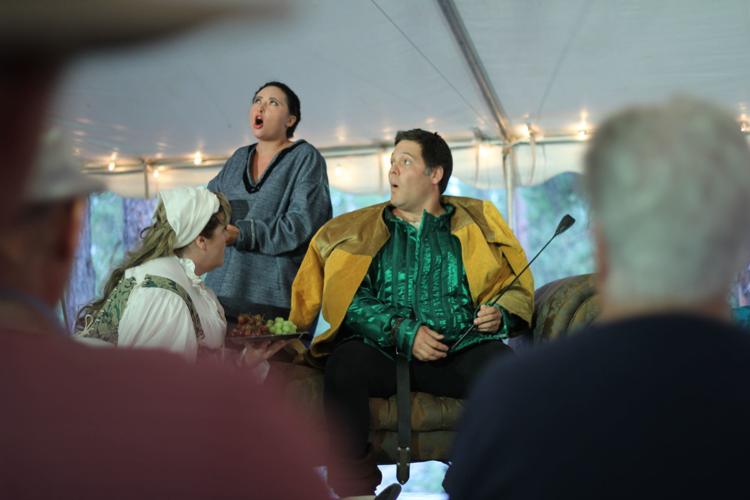 The Flagstaff Shakespeare Festival's production of "The Taming of the Shrew" runs this Sunday at 2 p.m. and next Saturday and Sunday, July 21 and 22, at 2 p.m. at the Museum of Northern Arizona.

In Padua, Italy, there lived two sisters, one fair and one brash. While Bianca, the fair one, is being courted left and right by suitors, she is forbidden from marrying until her older sister Katherine does, but marriage is the last thing on Kate's mind. This premise sets in motion a series of events which find Petruchio, a young fortune seeker, trying his hand at wooing Katherine to earn her wealthy dowry all while allowing Bianca’s suitors the chance at marriage too.

Flagstaff Shakespeare Company opens its fourth season with "The Taming of the Shrew," one of the Bard’s most popular comedies since it was written in the 16th century. Catch a matinee performance today at 2 p.m. at the Museum of Northern Arizona, 3101 N. Fort Valley Road, or next Saturday and Sunday, July 21 and 22, at 2 p.m. Tickets are $22.50 for adults; $16.50 for students, teachers, seniors and military; and $12.50 for children ages 6 to 14. Visit www.flagshakes.org for more information.

The two leads, Ryan Jenkins as Katherine and Keath Hall as Petruchio, are veterans to the FlagShakes stage who said they worked to bring aspects of their own personalities in preparing their roles.

“This show in particular is a little bit harder in the sense that it’s a challenge for me to be both amazingly attractive whilst also being terrifyingly intimidating, so a lot of it has been experimenting with physicalities,” Jenkins explained. “How does one who is as beautiful as Katherine, is as well-off as Katherine and her family, how does she stand, how does she speak.”

As Katherine, Jenkins balances that line of being violently independent but also open to the possibilities of love through moments of sensitivity such as at her wedding. Katherine seems to look forward to the courtship, yet when Petruchio appears to have stood her up she storms off stage in tears, exclaiming that he never truly intended to marry her and she fell for his cruel joke.

“As a woman of color we’re already looked at as being very angry and aggressive and sassy, and it’s hard trying to pick those moments when I use that to my advantage, but also hoping that that’s not becoming a caricature or a stereotype,” Jenkins said.

Hall’s portrayal of Petruchio leans more toward the light-hearted aspects of the character. For example, when he does eventually show up to his wedding he brings a bouquet and is outfitted with an outrageous pair of pants, mismatched boots and a headpiece similar to Katherine’s.

“[Petruchio is] kind of zany, so there are certain things that are in very hard conflict with each other, and I get to pick what I want to play more,” Hall said.

“I’m still trying to be true to what Shakespeare’s message was and try to emphasize what I think is the important point,” he added, “but there are some definite gender themes in this play that we have to confront.”

Holding the script to modern conventions of Western society raises some eyebrows. The way in which Petruchio tames Kate can be seen as misogynistic and controlling. Following their wedding, he denies her food and fine gowns, claiming the offerings are not up to the standards of a woman of her caliber. All this, however, is meant to lead them into forming a strong bond.

“We really tried to focus on the relationship between Kate and Petruchio and really allow them to come together and focus on enabling them to allow each other to grow,” said director Jesse Kamps. “Rather than Petruchio just dominating Kate, we’ve made it essentially clear that they are very attracted to each other from the beginning. The society that Kate is stuck in and the household that she is stuck in ignores her, is verbally and psychologically abusive toward her and has really become her prison so, even though Petruchio wouldn’t really be the ideal 21st-century man, in a way the two of them liberate each other.”

In one scene, Petruchio compares Katherine to a falcon, suggesting that he is training her as a falconer would by denying her food and sleep while he watches over her and undergoes the same hardships until she becomes submissive.

“We do make it very clear that Kate and Petruchio are going through these deprivations together,” Kamps said. “There is an element of mutual suffering that Petruchio thinks perhaps will make them grow closer.”

“It’s a tough line to walk after the Me Too movement with ideas of consent, and I don’t think a lot of the things that people read into in this play are necessarily what Shakespeare intended at the time, but we just have to find the right balance,” Hall said. “We’re trying to ask more questions than answer. We don’t want to tell anybody how they’re supposed to live, just make them think about it.”

Despite the more serious undertones, the humor in the play takes center stage as identities are stolen, secret handshakes are exchanged and characters share sly grins at each other from behind others’ backs.

“[This production was] a lot of work and a lot of fun,” said Jenkins.

Part of the FlagShakes mission is to present Shakespeare’s work in the most authentic way possible, including live music, universal lighting and a thrust stage which places the audience around three sides of the stage rather than just one. The outdoor setting also remains true to Shakespeare’s performances at The Globe as Flagstaff audiences will watch the play while surrounded by ponderosa pine trees underneath a canopy of lights. Several asides to the audience include them in the play and create an intimate and accessible experience.

What: FlagShakes’ production of The Taming of the Shrew

Cast members, Keath Hall (left) and Ryan Jenkins perform as Petruchio and Katherine, respectively, in FlagShake's production of "The Taming of the Shrew."

The Flagstaff Shakespeare Festival's production of "The Taming of the Shrew" runs this Sunday at 2 p.m. and next Saturday and Sunday, July 21 and 22, at 2 p.m. at the Museum of Northern Arizona.