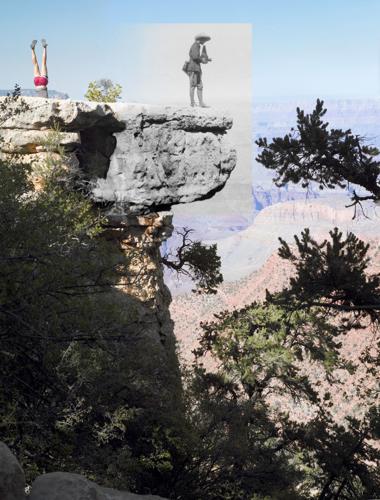 “Coburn with Dancer.” Mark Klett and Byron Wolfe, 2009. All photos courtesy of and copyright Klett and Wolfe. 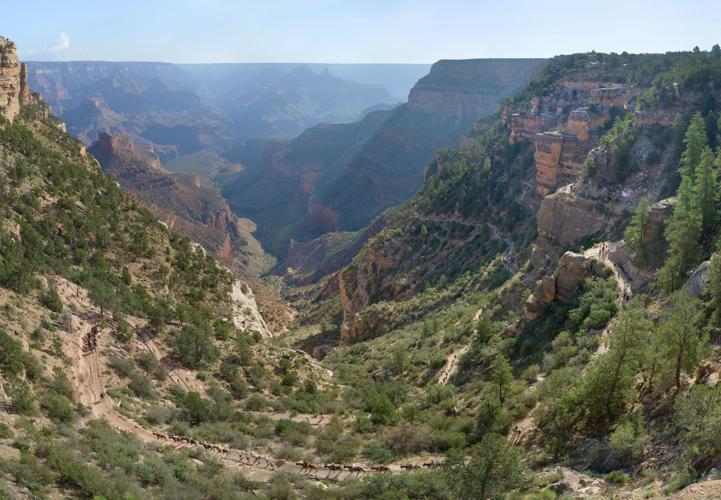 "Descending into the Canyon" by Mark Klett and Byron Wolfe, 2008. 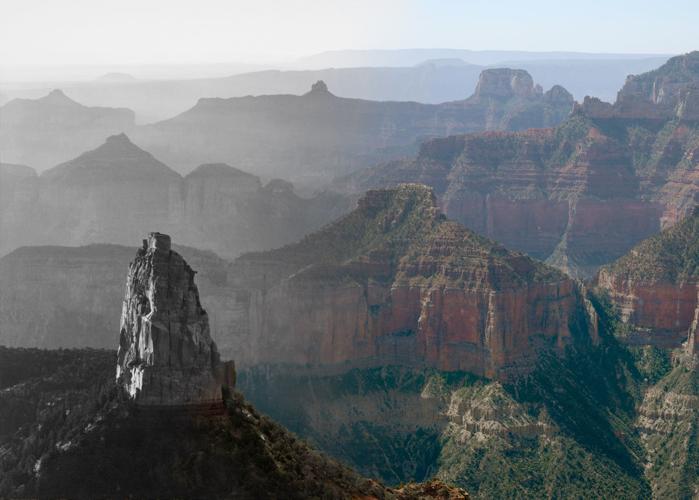 “Point Imperial and half of Ansel Adams.” Mark Klett and Byron Wolfe, 2008.

The 277-mile expanse of the Grand Canyon is one of the most photographed natural wonders of the world. Many visitors attempt to soak in the experience in minutes-long ventures as a been-there-done-that kind of trip and snap a photo or two, while others spend years studying and digging deeper to understand the complex wonders of the great gorge.

Mark Klett, photography professor, former geologist and author at Arizona State University and Byron Wolfe, professor of photography at Temple University in Philadelphia and former graduate student of Klett’s chose the deeper route. Together, they embarked on a journey of experiences as they worked to re-create historic images.

Through this process of re-photography, the pair created “Reconstructing the View,” a touring exhibition of mural-sized images now on view at the Museum of Northern Arizona until Nov. 1. It’s based on a book of the same name.

To learn more about admission and hours, visit www.musnaz.org.

The two photographers met in 1995 when Wolfe moved to Arizona to study under Klett’s leadership. Their projects enveloped place and history through varying forms of storytelling, but over the years, Wolfe said, the team’s interests expanded to include ideas of perception and meaning, how imagery influences expectations of a place.

In 2006, an exhibition about Yosemite inspired the pair to create even larger work in scale and scope, though simply initially as a creative endeavor.

Klett’s small collection of historic images of the Grand Canyon, brought them there in 2007. Involved in the re-photography process, Wolfe said, “It’s such a rich and vast place, we couldn’t stop.”

The photographer explained the process of re-photography developed from geologists’ processes used to study landscape change. “Having a precise, repeatable methodology was important,” he said, adding both photographers emerged from a tradition requiring razor-like precision.

Deeper in the process each summer, they found physical details between photographs had changed, but the biggest lesson was the mystery of perspective.

“For every site I’ve ever visited, what it’s like in real life is always unlike what the photograph is like,” Wolfe said. “The reality is never quite what the photograph is, even when the place itself doesn’t appear to have changed in any significant way. But photography is such a reductive act that the thing you end up with, that you can hold in your hands and look at, is such an abstracted notion of what it’s actually like to be there in person.”

To add to the dialogue, the pair incorporated historic images snapped 100 years ago by an unknown pioneer as well as those with definitive photographers and painters like Ansel Adams, Thomas Moran and Alvin Langdon Coburn.

Multiple techniques dot the pieces. At 72 inches by 100 inches, “Descending into the Canyon” is the largest piece Wolfe and Klett were able to physically print. A mule train heading down Bright Angel Trail is a stitched panoramic image, one of the pair’s earliest, that used software to merge 56 photos into a single frame.

The hope, Wolfe said, was to create something large and vast, and to convey the actual sensation of what it’s like to be on the edge of the Grand Canyon.

The pair’s unique re-photography also examines time. Wolfe noted the Grand Canyon project is not strict re-photography, so becoming part of the scene is another playful addition to the aesthetic. “The Jumper,” shows Klett’s hands gently pulling away overgrowth to reveal the spot where a man in a postcard drawing leapt between cliffs.

Wolfe added, “One of the ways we think about re-photography is that, in a way, it’s a form of time-lapse photography … It’s playful and fun, but it also indicates these places in these scenes are always evolving and changing.”

Some of the most common photos ever taken at the Grand Canyon in this or any other decade have been people looking over the rim, conveying a sense of scale. This idea is immortalized in “Man Peering into Space” and “People on the Edge.”

“That’s such a recurring, common visual theme it seemed necessary to do something with that,” Wolfe said of the latter mash-up combining multiple vantages along a playful, fictional landscape. Wolfe noted the image also references the pair’s initial unfamiliarity, and that of most visitors’, with the Canyon’s features blending together.

“Now when I tell people about the Grand Canyon, I think what’s most important is you go there and you just spend time there,” he added. “You see how it changes and transforms. At any given moment, it might not be that interesting, but the longer you’re there, the closer you get to accessing it and understanding how unusual, big and old it is. And that doesn’t happen when you pull up to the edge of it and just check it out.”

To learn more about the photographers, visit www.klettandwolfe.com.

“Reconstructing the View” is a touring exhibition of mural-sized images now on view at the Museum of Northern Arizona until Nov. 1. It’s based on a book of the same name. More information on hours and admission at www.musnaz.org

“Coburn with Dancer.” Mark Klett and Byron Wolfe, 2009. All photos courtesy of and copyright Klett and Wolfe.

"Descending into the Canyon" by Mark Klett and Byron Wolfe, 2008.

“Point Imperial and half of Ansel Adams.” Mark Klett and Byron Wolfe, 2008.