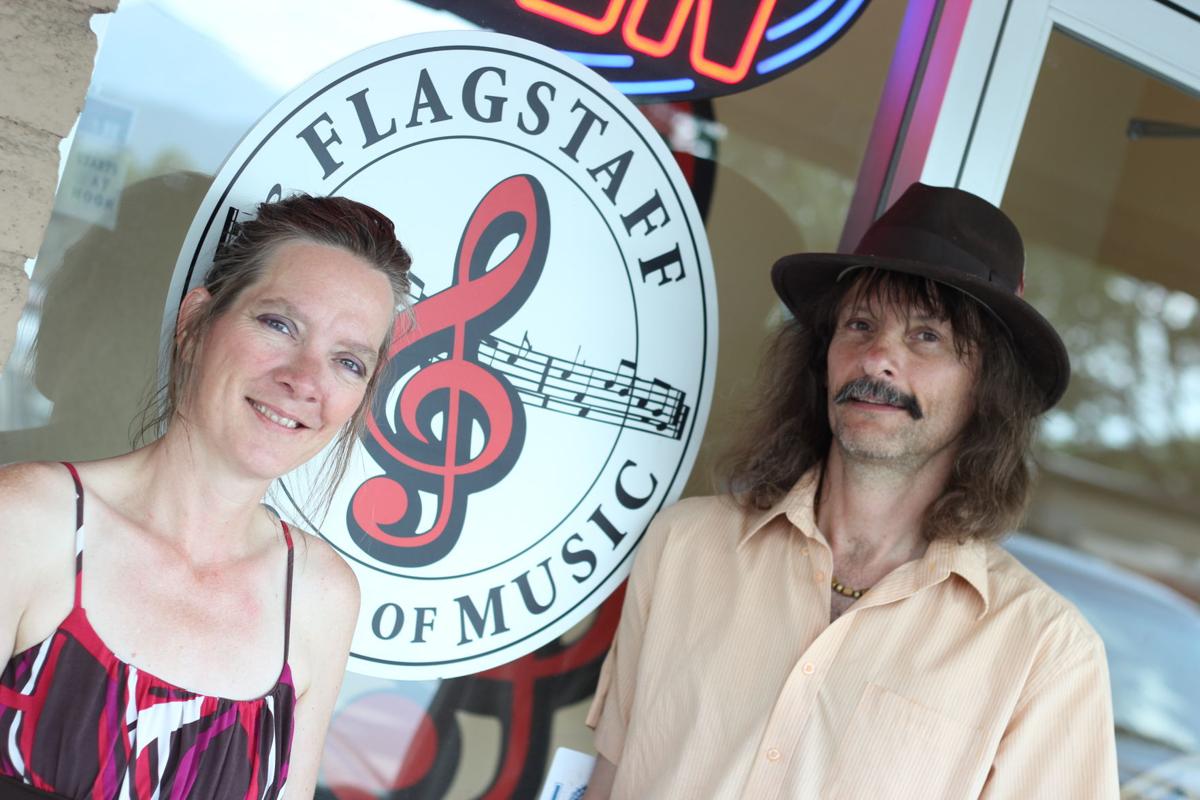 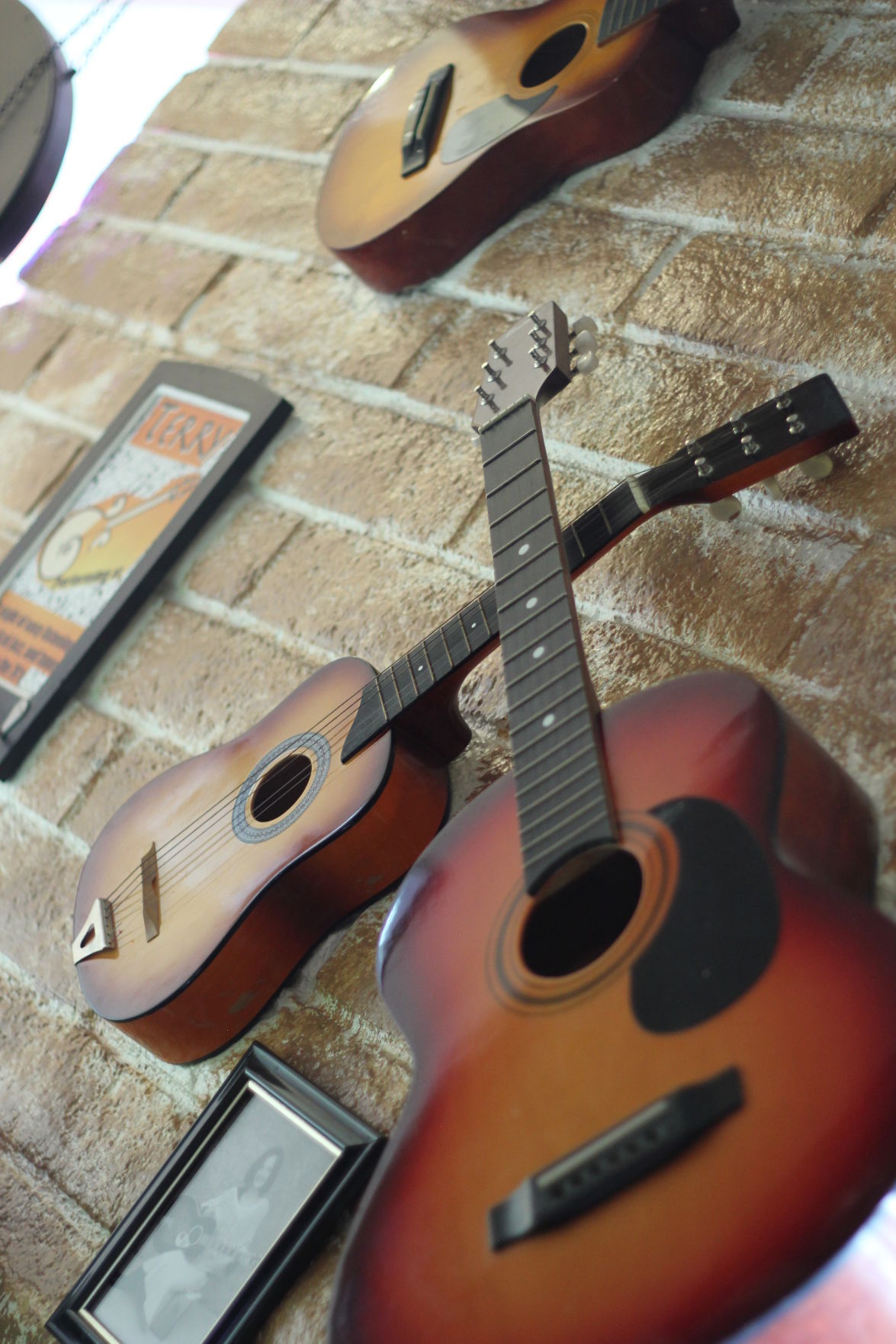 Guitars line the walls at the East Side Flagstaff School of Music. Photos by Diandra Markgraf. 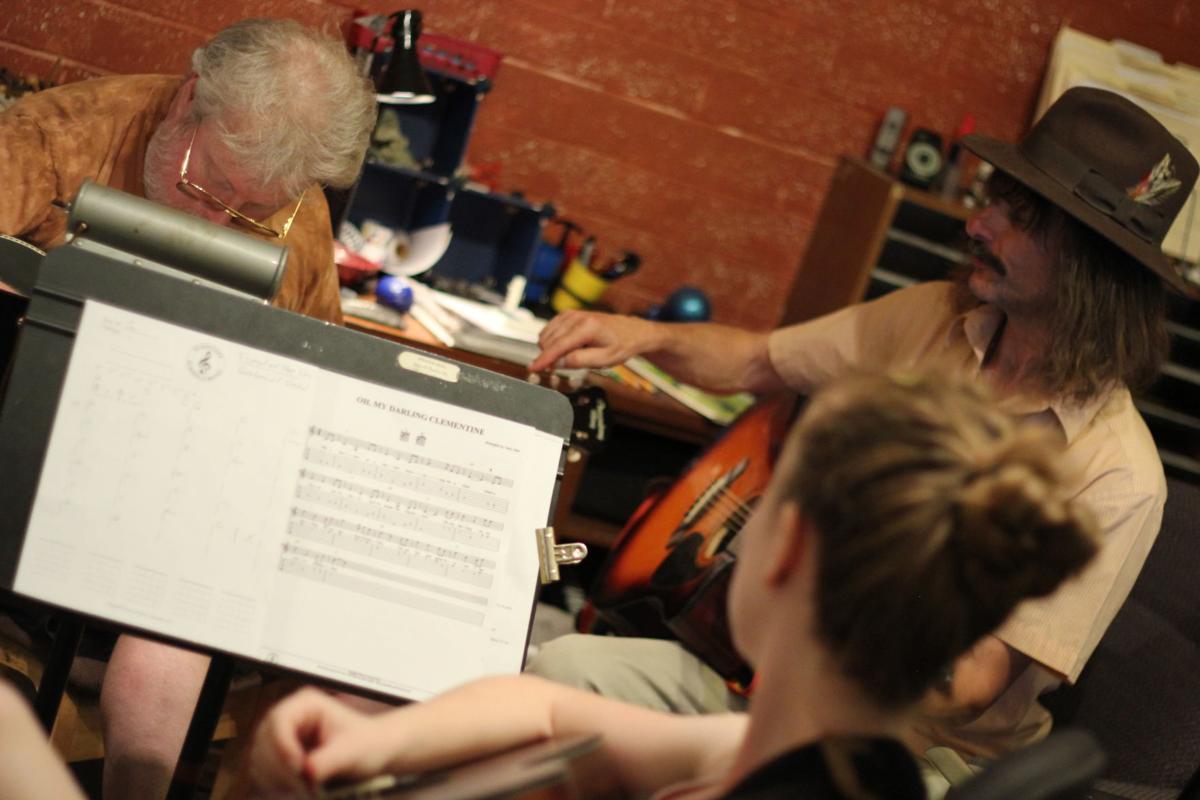 Gentle notes strummed on a guitar float from a cozy storefront on Flagstaff’s East Side. At the Flagstaff School of Music, a couple of students are getting a lesson in a classic campfire tune, “Oh, My Darling Clementine.”

The 7th Street facility is one of only a handful of brick-and-mortar studios operating locally where students can learn an instrument. Now boasting more than 150 students under eight instructors, including Alan, the School of Music spans genres among dozens of instruments, as well as operations and sound engineering.

And its owners, Terry Alan and Bonnie Dumdei, have grown their mission by word of mouth since the doors first opened in 2010. The School works to form students’ visions, and lessons come alive during regular recitals and at the Second Saturday East Side Show at White Dove Coffee, located just next door, plus an art market in the school itself.

The next East Side Show takes place on July 8. See FlagstaffSchoolofMusic.com for more information.

For the couple originally hailing from Minnesota, the origins of the business and teaching opportunities are rooted in Alan’s experience as a trained musician — and it almost never was.

When they moved to Flagstaff in 1994, Alan worked as a machinist, foregoing music entirely. He sold his guitar to pay rent, and within three months, he said he was leading a worship team with a borrowed guitar.

For the longtime player, music seemed to have run its course, “but it had only just begun.”

By 2007, Alan decided to relaunch a career of professional playing, and he and Dumdei — with community support — opened the current location’s doors.

The School has developed through word-of-mouth marketing from Alan gigging around town and Dumdei rubbing elbows with community members at festivals. The owners believe this style inspires traded services and fosters growth.

Reilly Alexander, a long-time player and coincidentally a native Minnesotan, too, noted Alan’s professionalism. He fine-tuned her self-taught style, and now she instructs beginning piano and is the school’s only group guitar teacher.

As an instructor, she’s an independent contractor. Students pay $100 per month for weekly half-hour classes, and a portion of those dollars goes to the School, similar to a hair stylist’s chair fee in a salon.

“It’s ridiculous,” Alan said, starting at drums and bass, winding through an entire orchestra, and finishing at sitar.

“We’re there to meet an individual’s need for the week,” Alan said. “Another important thing to realize is if they don’t want to play Tchaikovsky, it’s not fun to them, they might falsely judge their musicality because of that, because of the musicality of a teacher.”

The point of the school, he said, is to offer a holistic understanding, where students can settle into their own groove with weekly lessons or go for the performance-ready experience that sees them go beyond the regular recital to the East Side Show.

For the last year, the event sees School of Music students on White Dove’s stage alongside professional and amateur musicians in the community with an art market next door at the school.

“The East Side Show grew because there was demand from within the School to do more, and because I think there’s also a whole bunch of people out in the community who need the opportunity to do more,” Dumdei said. “It’s about finding the people to become the next Hired Guns or Mother Road Trio.”

Alan said five or six songs is a healthy lineup of tunes for any player hoping to compile a set. After all, every player must start somewhere.

Even Alexander said there was a time when she could play only one verse and chorus, and learning the fundamentals of an entire song helped her gain confidence — a struggle of many would-be musicians.

Alan noted he discovers people often have an instrument lying around, and that simply picking it up with a teacher’s coaching helps to rework those pathways in the brain.

“There’s a tremendous amount of physiological things going on in people when they’re trying to read the music and transfer it to motor skills. It’s a stirring up here that changes things,” Alan said, tapping his finger to his temple.

In this, as studies corroborate, the learning and playing of music can be beneficial for all.

“Learning of music is healing for you,” Alan added, “and when you play for others it’s healing for them because they relax and enjoy it.”

Jennifer Garner has signed a multi-picture deal with Netflix

Guitars line the walls at the East Side Flagstaff School of Music. Photos by Diandra Markgraf.