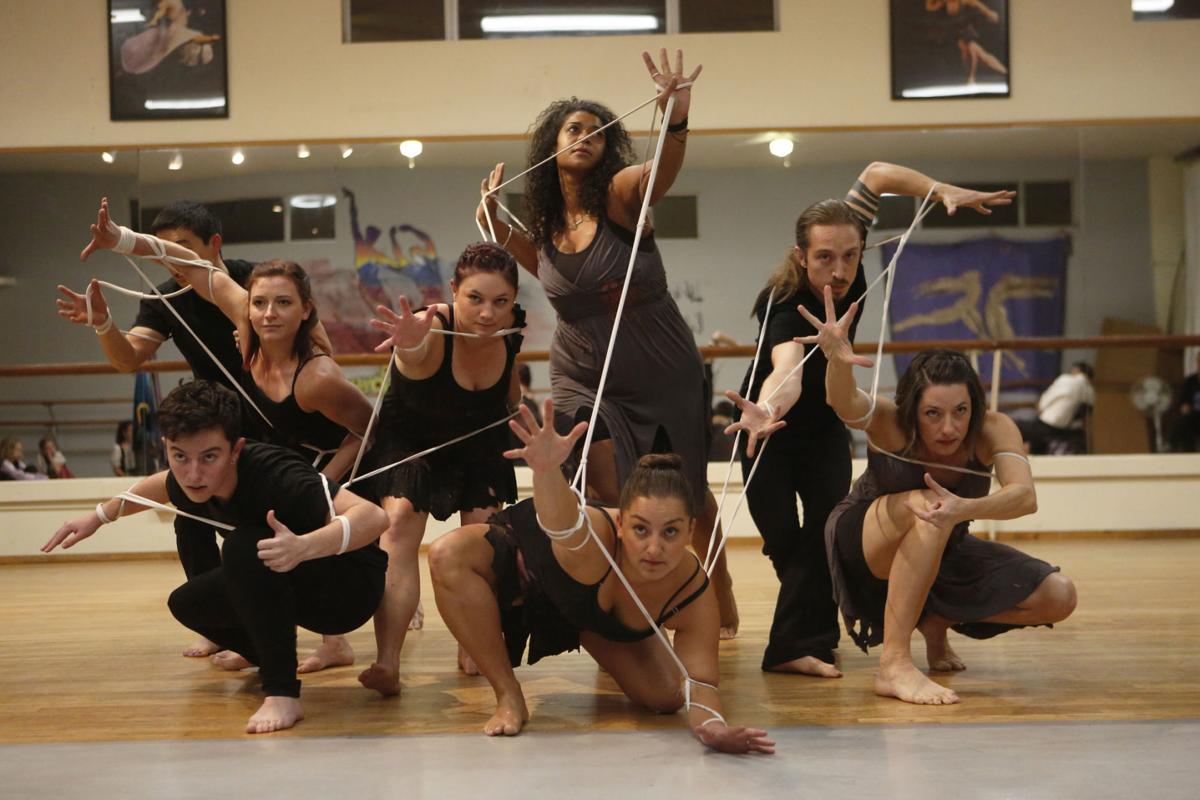 Actors performing in the upcoming production of Canyon Movement Company’s A Christmas Carol perform the part of, the ghost’s of Jacob Marley Friday evening during a rehearsal. 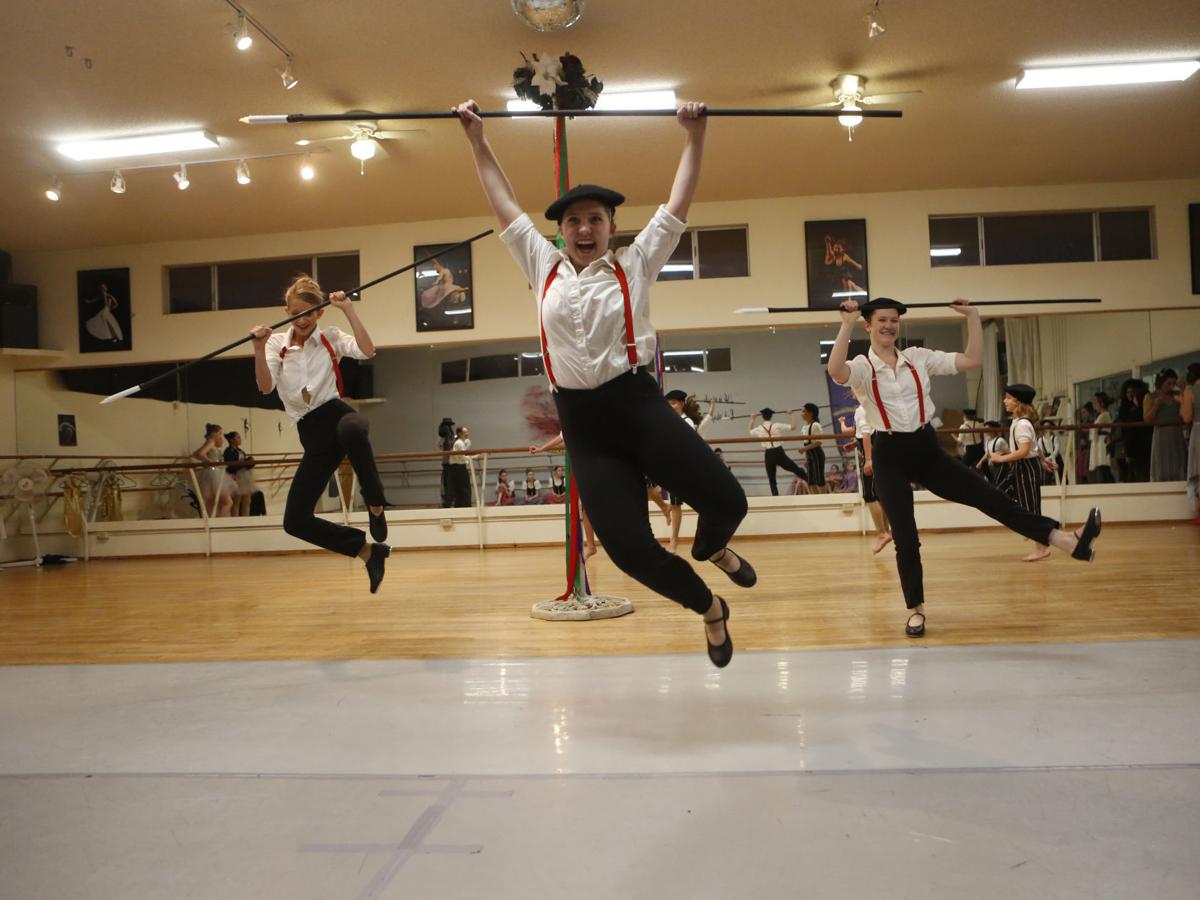 Actors performing in the upcoming production of Canyon Movement Company’s A Christmas Carol perform the part of, the lamp-lighters Friday evening during a rehearsal. 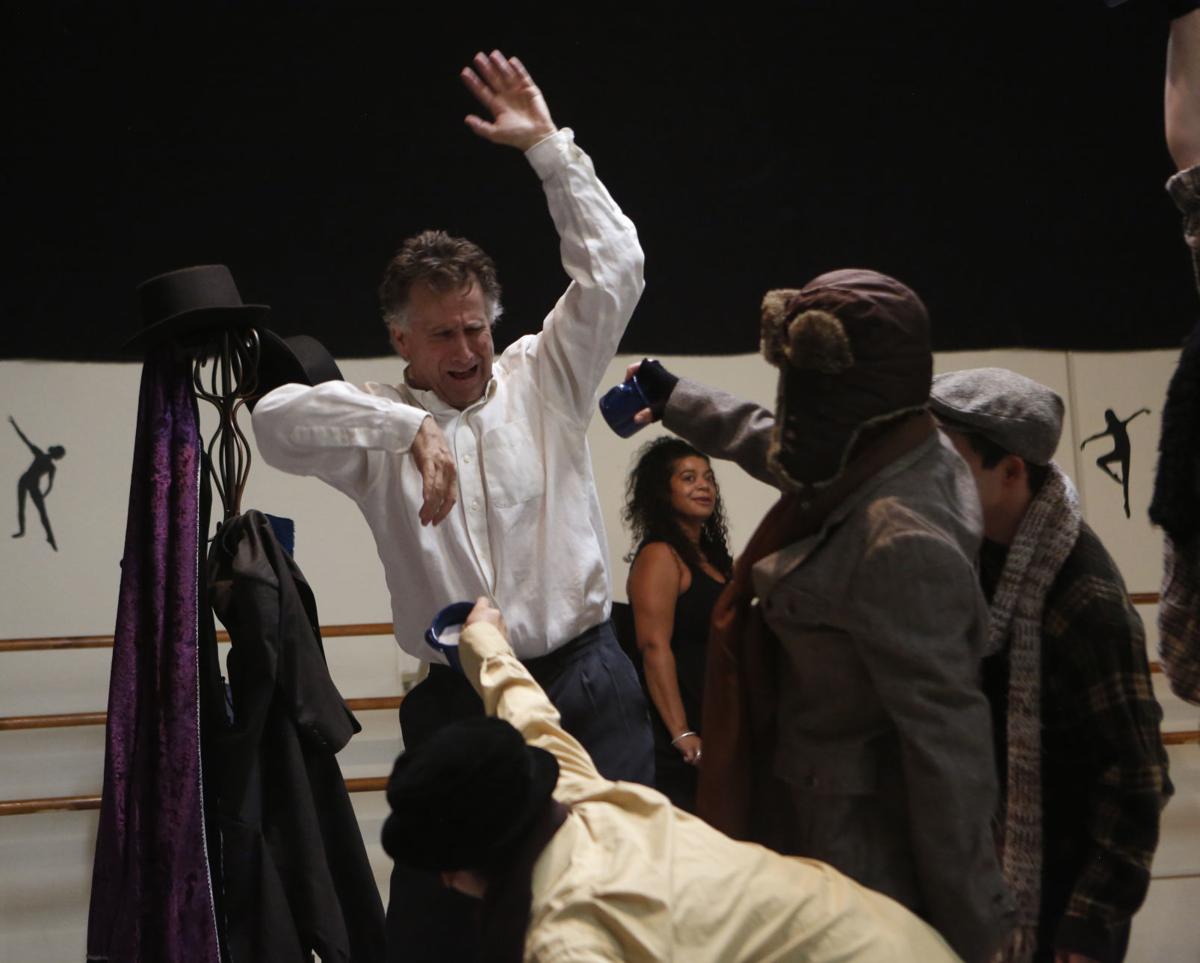 Paul Morre performs the part of Ebenezer Scrooge Friday evening during a rehearsal of the Canyon Movement Company’s A Christmas Carol.

For the past 14 years, Canyon Movement Company has performed “The Nutcracker in Modern Bare Feet,” carving its rightful place in the seasonal must-sees of local entertainment.

This year, the dance company will veer from tradition to debut “A Christmas Carol Suite in Modern Bare Feet.” With change comes an opportunity for growth, and the performance will feature original choreography to tell the story of the miserly Ebenezer Scrooge.

“It’s been really fun, I think, not only for the adults who some have been in [‘The Nutcracker’] maybe 12 out of the 14 years but also for a lot of the kids,” director Gina Darlington said.

Canyon Movement Company will present “A Christmas Carol Suite in Modern Bare Feet” at the Clifford E. White Theater on Northern Arizona University’s campus, 1115 S. Knoles Drive, 7:30 p.m., Friday and Saturday, Dec. 7 and 8, with an 11 a.m. matinee performance Saturday. Advance tickets are $19 for adults, $14 for students, and can be purchased through NAU’s Central Ticket Office at (928) 523-5661 or online at ticketing.nau.edu. Prices go up by $2 day of the show. For more information, visit CanyonMovementCompany.org.

Paul Moore of Human Nature Dance Theatre will perform as the infamous Scrooge and has been working on how to approach the role as a central character that’s not necessarily the focus of the show.

“He’s very in tune to how to interpret the moods and the feeling of Scrooge,” Darlington said. “He has done a lot of butoh, and I think that has really benefited us because he really internalizes the character. I don’t think I could have made a better choice for Scrooge.”

In Charles Dickens’ 1843 novella, he describes Scrooge as “a squeezing, wrenching, grasping, scraping, clutching, covetous, old sinner! Hard and sharp as flint, from which no steel had ever struck out generous fire; secret, and self-contained, and solitary as an oyster… He carried his own low temperature always about with him; he iced his office in the dog-days; and didn’t thaw it one degree at Christmas.”

Moore said he has been rereading the book to prepare for the show and drew from it in his interpretation of the character.

“The way that I’m connecting directly from my experience is just the place that we all get to when we’re stressed and trying to make a living, and things get crazy at work,” he said. “You just have to put all your attention to that, and sometimes that can make you unavailable to friends and family.

“This is a dance performance, and there are a lot of different forms of dance, but it’s also theater and trying to tell a story, so I bring some of that with me. I’m starting to work on the idea of how simple and minimal my movement can be and still tell a story.”

When Scrooge is visited by the Ghost of Christmas Past and gains insight into how the actions of his younger self shaped the man he became, he is forced to consider changing his ways before it's too late to find happiness.

With brand new choreography comes the freedom to choose new music as well, and Pink Floyd’s “Money” will serve as the soundtrack to a dance highlighting Scrooge’s goal of making money instead of building meaningful relationships. Moore’s daughter Ella will dance as one of the gold coins in that piece.

“There was a fairly recent Disney version of ‘A Christmas Carol’ with Jim Carrey in it, so we pulled a lot of music from there and then we’re using Pentatonix, The Piano Guys,” Darlington said. “It’s really a mix of music.”

As with past Canyon Movement Company productions, other community troupes – Flagstaff Aerial Arts, Momentum Aerial and Velocity Dance Company – are contributing talent to the show.

“That’s part of our mission and I think that’s one of the great things about Canyon Movement is that we do reach out to work with other people,” Darlington said.

The company also performs the production free for several area schools, allowing more people to see it while spreading a message of good-doing.

“The whole holiday thing, it’s kind of meant to be festive and a family affair, but sometimes it just seems like it adds more stress and we get caught up in all the work it takes to make it happen,” Moore said.

“A Christmas Carol Suite in Modern Bare Feet” invites attendees to reassess what’s important to them this holiday season and learn to appreciate the simple things in life as they take part in a brand new show.

When: Friday and Saturday, Dec. 7 and 8, with an 11 a.m. matinee performance Saturday

Behind the lights: Dharmesh Vora, Chamber of Commerce gear up for annual holiday parade

There are a handful of happenings that usher in the holidays in Flagstaff: The moment the lights on the large spruce next to NAU’s Blome build…

Actors performing in the upcoming production of Canyon Movement Company’s A Christmas Carol perform the part of, the ghost’s of Jacob Marley Friday evening during a rehearsal.

Actors performing in the upcoming production of Canyon Movement Company’s A Christmas Carol perform the part of, the lamp-lighters Friday evening during a rehearsal.

Paul Morre performs the part of Ebenezer Scrooge Friday evening during a rehearsal of the Canyon Movement Company’s A Christmas Carol.