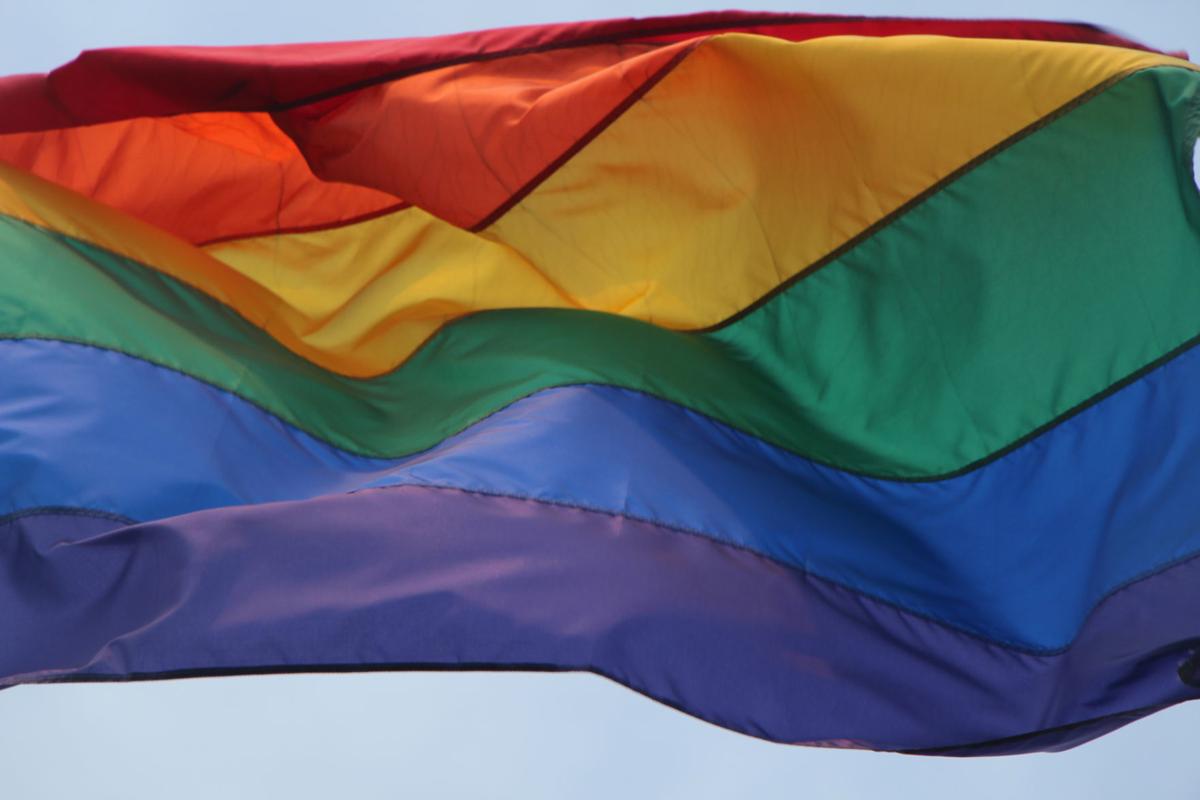 Kat Jim and Meagan and Natalie Metz are each featured in Resilience: Women in Flagstaff's Past and Present.

Kat Jim and Meagan and Natalie Metz are each featured in Resilience: Women in Flagstaff's Past and Present.

Meagan and Natalie Metz are the only two women featured in Resilience: Women in Flagstaff’s Past and Present who share a poster. It’s not for a lack of space or because they are not their own distinct selves, but because their partnership plays a pivotal role in their story.

The Metzes met in Flagstaff. Natalie came to attend Northern Arizona University, Meagan to visit her sister. The latter loved it so much she would prolong her trip multiple times, until she finally relented and stayed. The two ran in the same circles, shared a community and became fast friends. Before long, however, it was clear there existed something much deeper between them.

“We were both in relationships and doing our own thing but we really, really connected, and once we got to know each other we just couldn’t stop spending time together,” Meagan said. “Then we both realized we wanted to spend all of our time together, and were like, ‘So let’s evaluate what we’re doing in life.’ It kind of became really obvious. We were only friends for a short time.”

The two started dating in 2007 and got married in 2013, on a ferry traversing the waters surrounding Seattle, Washington—at the time the only state in which gay marriage was not banned. Washington legalized gay marriage in 2012.

“We would have gotten married the second month we were dating if it’d been legal,” Meagan said.

In the years since, Natalie has honed a knack for finishing her wife’s sentences. When words fail Meagan, Natalie steps in with such ease that one hardly notices an interruption in the sentence.

This happens in everyday situations, a casual phone call or a conversation of little consequence, but Natalie has also mastered the art when it comes to helping Meagan articulate her thoughts in more serious settings. The latter’s battle with Ehlers-Danlos syndrome, a serious and chronic connective tissue disease, is one of those.

Meagan received the diagnosis shortly after the two got married. Since same-sex marriage wasn’t legal in Arizona at the time, navigating the ensuing medical tests and countless doctors’ appointments without the rights awarded to married couples proved near impossible as well as emotionally draining.

“When you’re in the hospital or any kind of emergency setting, status matters,” Meagan said. “Every time I referred to my partner, people just disregarded it. They didn’t view her as my wife, they didn’t give her the same accommodations if she were a man.”

“When your loved one is ill there’s always this loss of control anyway, you’re putting someone that you care the most about in the hands of people you don’t really know. It’s a scary place to be and then to know that at any time I could be asked to leave or get kicked out because I wasn’t family. There was this level of anxiety around all these medical things that were already coming at us really fast,” Natalie said.

As a result, the Metzes joined the 2014 Connolly v. Roche case, which challenged Arizona’s constitutional ban on same sex marriage. The case went all the way to federal court and proved a major stepping stone to legalization of same sex marriage in the state.

Nationally, gay marriage became legal in 2015, though the two learned that discrimination didn’t disappear entirely with new policy and they still face homophobia at various hospitals and clinics. It does permit Natalie’s presence in the room to hold her wife’s hand or be privy to information surrounding her health, however.

Meagan’s health has worsened in recent years but their relationship has become stronger, they’ve “become better as a couple,” Natalie said, learning to navigate chronic illness together. When Meagan underwent chemo therapy, Natalie shaved her head in solidarity.

The two find themselves often drifting back to their wedding.

“It was really just the greatest day, and we still think about it and talk about it all the time, ‘cause it just lifts you up,” Meagan said.

As if in the same thought, Natalie chimed in, remembering her mom and Meagan’s sister standing on the ferry.

“We were out in the water and stood on the boat facing the Seattle skyline,” she said. “And it was just the most organic, unplanned, not stressful, just beautiful thing, like when things just come together because they’re meant to come together. It was just like magic.”

When Arizona Historical Society Pioneer Museum approached the Metzes about being part of Resilience, the couple was surprised. Theirs wasn’t necessarily a fight for marriage equality in the grander political scheme of things, though they eventually saw it as such, so much as it was something they knew they needed and wanted to do.

“We were in awe of the other people that were included [in Resilience] and we felt just so incredibly honored because we obviously did the marriage equality case for marriage equality in Arizona, but we were a little bit selfish because it was also just for us. We were amazed that someone would want to honor us for what felt like our duty and work that we should be doing anyway,” Natalie said. “Eventually I understand why were are honored, and of course we are still just blown away because, as everyone knows, there are hundreds of thousands of incredible women in Flagstaff that do these things all the time. It’s just our life, and it feels special to be honored for something that is our life.”

When Kat Jim, whose pronouns are they/them, heard the Church of Jesus Christ of Latter Day Saints would not eliminate a ban on LGBTQ conversion therapy, they immediately logged onto Facebook to read more.

The LDS Church officially came out against a proposed ban on the practice in October, saying in a statement that rules prohibiting Utah psychologists from engaging in conversion therapy would fail to safeguard “religious beliefs,” among other things.

Though Jim, now the president of Northern Arizona Pride Association, was excommunicated from the church in 2008 for being gay and had long distanced themselves from the organization, the decision still came as a blow.

“It was really good to see that some members of the church were fully against that choice, but the decision itself was a huge disappointment,” they said.

Jim is nonbinary, meaning they adhere to neither male nor female ascriptions. They are working toward a reconstructive top surgery, a step they hope will finally allow them to feel “whole.”

Adopted by a white Mormon family, Jim, who is Diné of Bitter Water and Red House clans, was brought up in the religion, and much of their family ostracized them when they came out.

“It was very difficult,” Jim said in a June interview with Flagstaff Live! “For my grandmother especially, but she loved me. There are a few people in my family that still aren’t comfortable with it, but I have cousins and my mother and partner who are supportive. I’m very lucky compared to most that have grown up in the LDS.”

Jim considers themselves nondenominational, finding more connection with “Mother Sky and Father Earth” while on hikes in the forest than a God “that judges people for who they are,” they said. The shedding of organized religion has come with the exploration of their Native American heritage.

“I think I’m becoming more involved in my heritage. I think that religious sects have really compromised and taken away a lot of the beliefs and history for indigenous people,” Jim said.

In many ways, reconnecting with their indigeneity has been formative in Jim’s exploration of gender. Several tribes recognize a third gender and roles beyond the binary. The term “Two-Spirit,” for example, is an umbrella term used by many First Nations for tribal members that fit neither male nor female labels. In Navajo, the word Nádleehi describes a male with effeminate qualities or a female with male characteristics, but it’s much more fluid even than that, and difficult to relegate to gender binaries.

“I was definitely raised in a white society, and so being able to come into my own and learn about two spirits and that I was part of two worlds was so important,” they said. “Not knowing that in part of my identity as an indigenous person there was this third gender, suddenly people could see me and they knew that was me.”

Jim became the president of Northern Arizona Pride Association after a long involvement with the organization. They moved to Flagstaff in 1998 and began volunteering at Pride in the Pines in 2003, later becoming a volunteer coordinator and moving up the proverbial ladder from there.

Pride, a celebration for and by LGBTQIA+ people that has its origins in the 1969 Stonewall uprising, has seen different venues in Flagstaff over the years. Wheeler Park hosted the festival in 2004 where it stayed for about 10 years, and Fort Tuthill County Park saw Flagstaff’s first Pride—a gathering of about 200 people—in 1996. Jim still remembers the small U-Haul that doubled as the dressing room for performing drag queens there. Last year’s Pride brought in about quadruple that number at 5,000 people, with more than 6,000 showing up to the 2019 iteration.

This column is the seventh in a 10-part series on the exhibit “Resilience: Women in Flagstaff’s Past and Present.” The exhibit was created by the Martin-Springer Institute and the Arizona Historical Society, with students from Northern Arizona University. It features 21 women and non-binary people who, despite adversity in their lives, contributed to the community. The exhibit team includes students Mary Burke, Holly Filsinger, Rachel Lauver, Hana Lipke, Martha Martinez, Marley Oakes, Savannah Penick, Avi Penner and Tristan Triebe, and mentors Melissa Cohen, Björn Krondorfer, William Peterson and Sacha Siskonen. ”Resilience” will be displayed at various venues and is also installed at Flagstaff’s Pioneer Museum. Currently it can be viewed at Flagstaff High School and The Arizona Historical Society Pioneer Museum, 2340 N. Fort Valley Road.

You are entitled to your deviancies and your delusions. Not entitled to demand acceptance and participation.

Could care less about who someone sleeps with, but I won't be referring to an individual as "they/them" anytime soon.