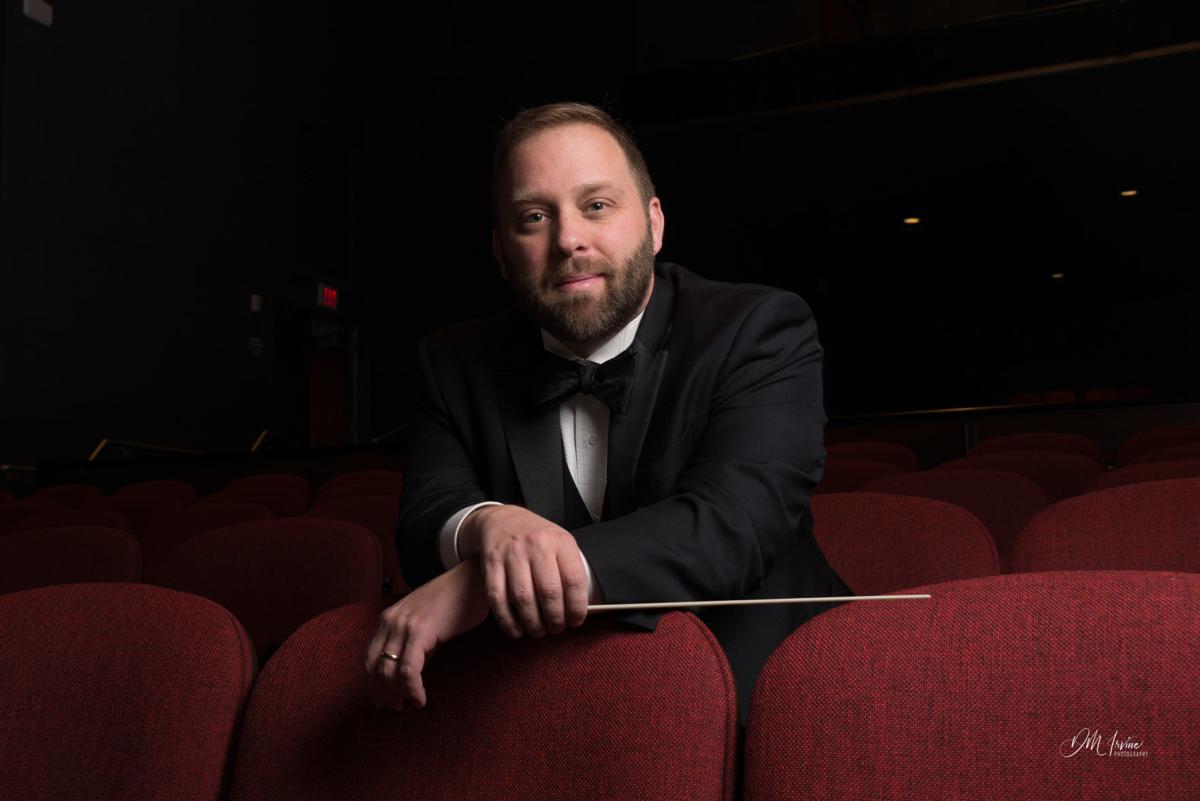 "Conducting is the first thing I ever encountered where I felt like no matter how hard I worked and no matter how much I improved, there was no ceiling. I could continue to challenge myself forever and would probably never feel like I'd fully mastered it." As Flagstaff Symphony Orchestra continues its 70th season, conductor Charles Latshaw reflects on the anniversary and his background in music. 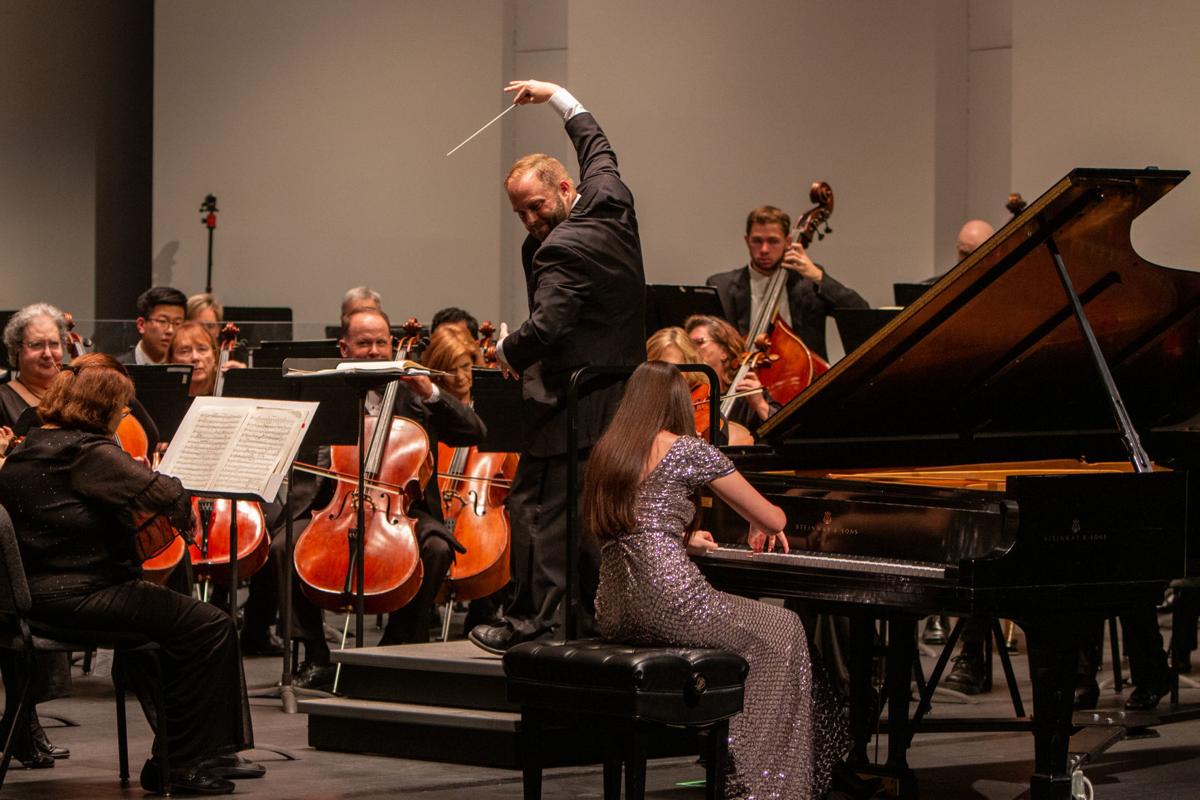 Charles Latshaw (center) conducts a performance with Daniela Liebman on piano, Sept. 27, 2019. Latshaw is in his third season as music director of the Flagstaff Symphony Orchestra.

It’s been pretty busy at the Flagstaff Symphony Orchestra. From its season debut featuring piano prodigy Daniela Liebman, to a Halloween show, to its annual performance of The Nutcracker, FSO has made the most of its 70th season. It’s a milestone for which conductor Charles Latshaw is grateful.

The new year brings new performances by FSO. As the orchestra prepares for its upcoming performance Jan. 24 with PROJECT Trio, a Brooklyn-based beatbox/classical trio, the Arizona Daily Sun sat down with Latshaw to learn a little more about his background, the orchestra’s 70th season and just what the heck he’s doing up there when he’s waving his arms like a madman.

Gabriel Granillo: The Flagstaff Symphony Orchestra is celebrating its 70th season this year. As conductor of FSO, what does the milestone mean to you, and what can we expect moving on to 2020?

Charles Latshaw: I'm only 40 years old. In the world of orchestral conductors, that's very young. Not only is the orchestra itself 30 years older than I am, but many of the musicians have been in their positions longer than I've been alive. It means that FSO has a great wealth of wisdom and experience on stage with me every evening at rehearsals and concerts, and I'm grateful to have the opportunity to benefit from it. I feel like I'm learning new things every day, and it's a privilege I don't take for granted.

[This year] is a big year for orchestral music. FSO, like just about every orchestra around the world, is celebrating Beethoven's 250th birthday. We've already got a big Beethoven bash planned for September, and we're getting started on that with a performance of Beethoven's first symphony this February.

The upcoming Symphonic Beatbox performance features PROJECT Trio, an ensemble whose focus moves from Baroque to hip-hop. The performance seems vastly different from typical FSO concerts. How did this group come into your radar and why bring them here?

I first encountered Project Trio the same way millions of other people did—on YouTube. Greg Patillo plays flute with the group, and 10 years or so ago he started posting really remarkable videos of himself playing hip-hop-ified versions of classical music, beatboxing while playing the flute. I've been following Greg's postings ever since, and later he, Eric Stephenson and Peter Seymour put their trio together and started posting as PROJECT TRIO.

I've been a fan since the beginning. They're all classically trained, extraordinary musicians, who've found a way to blend old and new, serious and fun, stuffy and approachable, better than any other musicians I've known. This concert, therefore, is a great mix of familiar orchestral favorites and new experiments. So if you're a traditionalist who wants to hear the William Tell overture, or you're a newcomer to the whole orchestral scene, this is a great concert to attend. Also, this is a program that is definitely a great one to bring young people to who haven't been to an orchestra concert before.

[Patillo] also had a recurring role on the Nickelodeon show iCarly, so many young folks, especially high school age, would immediately recognize him as the "beatboxing flutist" character from the show.

What were some of your early inspirations, and when did you know you wanted to be a conductor?

I would describe myself as a "first generation musician." There aren't any other musicians or performers in my family. But my mother had felt as though she had missed out on something, never having spent any time with music. So she made all of her children take piano lessons. I was the youngest, and started when I was six. I remember being terrified of my teacher, Mrs. Smith, and crying in most of my lessons. But for some reason it stuck, and I later played trumpet in band and sang in choirs and acted in theater.

I had never even heard an orchestra until I was a teenager. The Russian National Orchestra came through my hometown of Toledo, Ohio on tour. My mother asked me if I'd like to go hear them, so we bought last-minute tickets and sat in the front row. They began the concert with the first movement of Sergei Prokofiev's Romeo and Juliet, and from that first moment I heard the power and might of a full orchestra, I knew I wanted to be a musician for the rest of my life. We played the Prokofiev last season with FSO, and it remains my favorite piece in the whole world.

Why conducting, specifically? Because it's the most challenging job I can imagine. It's the first thing I ever felt inadequate at. I'm a reasonably smart person—school was never difficult for me. I was a solid professional trumpet player without putting a great deal of effort into it. I even had a decent career as a theater actor in New England, almost by accident. But conducting is the first thing I ever encountered where I felt like no matter how hard I worked and no matter how much I improved, there was no ceiling. I could continue to challenge myself forever and would probably never feel like I'd fully mastered it. It's a challenge musically, to know every note and to hear every note and to analyze problems and find areas for improvement. It's a challenge emotionally, to create art and pace a concert and to build an experience for the orchestra and audience. It's a challenge physically, to find the right gesture to convey an abstract audible concept with my arms, or my face, or my fingers. It's a challenge socially, to find exactly the right way to interact with each musician as an individual and the orchestra as a whole, to figure out what they're thinking and what they need to be at their best and how to organize the whole thing.

Maybe, when I'm celebrating my own 70th anniversary, I'll start to feel like I've mastered this whole conducting thing. But for now, I feel like I'm better every week and there's no limit to how much better I could be. I love that feeling.

Sometimes we recognize conductors for their flailing arms and crazy gestures, but certainly there’s more to conducting than that. What are some misconceptions about your profession?

My job is a bit mysterious, isn't it? I'm the last person to walk on stage, and I'm the first person to leave the stage. I make none of the sound that people came to listen to, and at the end of every concert I turn around and take all the credit.

Perhaps the most common misconception would be that I'm completely "in charge" of every note that gets played in a concert. That's just not how it works. The musicians are in charge of their own performance, and it's actually my job to organize, guide and shape the overall direction of the music. Non-musicians ask me often, "How come it looks like nobody's watching you most of the time?" That's because they're all doing their own jobs and they only need to glance at me when they need instructions on how to proceed. Really, when things are working at their best, the musicians are looking at each other more than they're looking at me.

Think about driving a car—you know the direction you need to go, and you know how to operate your own vehicle. But you definitely need to look at the other cars to make sure you're all traveling safely down the same road. And you need to look at the traffic lights to know when to start and stop. And you need to glance every now and then at the speed limit signs or the yield signs or the lane lines to make sure you're going where you need to go and doing it in an organized fashion. That's very similar to how an orchestra operates, and when things are going very well, I'm much more like the road signs and the traffic lights, giving everybody the information they need to be at their best while they do all the actual work.

Surely, you’re not always listening to classical music. What’s an artist/genre of music you listen to that might surprise people?

Well, first of all, there's always music that I'm studying for future concerts, and that music is always playing in my head. While I'm rehearsing one orchestra for a concert, I'm usually studying and preparing music for another program.

But as for listening for fun, here's a partial list of the CDs currently in my car: Eric Clapton's Unplugged, Mel Torme's Live at Michael's Pub, Django Reinhardt and Stephane Grappelli bluegrass album, a collection of alphorn and yodeling music from Switzerland, an album of Native American flute music by Carlos Nakai, and other odds and ends.

I enjoy just about anything, and I do make an effort to keep up with the latest pop music—my Spotify playlist includes recent albums by Kanye West, Billie Eilish and Taylor Swift. I think a lot of people would be surprised to know that I don't just listen to orchestral music, and spend a lot of time listening to Top 40 stuff, and would probably be even more surprised to know that I almost never listen to orchestral music in the car. It's a safety hazard— I can't avoid conducting along with the recording or loudly disagreeing with the performance if I'm listening to orchestral music while I'm driving. (I can usually behave myself at a concert.)

Learn more about Charles Latshaw and his role as conductor at his talk, Behind the Symphony, Jan. 22, at 6 p.m., at Ardrey Auditorium, 1115 Knoles Dr. Catch FSO’s first performance of the year, Masterworks III, featuring PROJECT Trio.

Performance begins at 7:30 p.m. $20 to $74 based on location. For more information and a full list of events and performances, visit www.flagstaffsymphony.org

Editor’s note: A version of this Q&A appeared in the Sunday, Jan. 12, issue of the Arizona Daily Sun. To read the full version, visit www.…

"Conducting is the first thing I ever encountered where I felt like no matter how hard I worked and no matter how much I improved, there was no ceiling. I could continue to challenge myself forever and would probably never feel like I'd fully mastered it." As Flagstaff Symphony Orchestra continues its 70th season, conductor Charles Latshaw reflects on the anniversary and his background in music.

Charles Latshaw (center) conducts a performance with Daniela Liebman on piano, Sept. 27, 2019. Latshaw is in his third season as music director of the Flagstaff Symphony Orchestra.