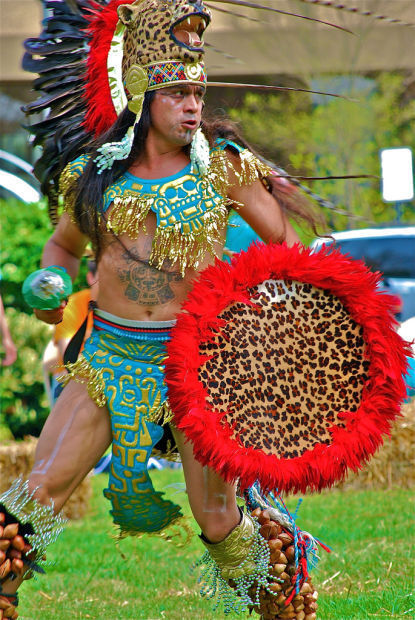 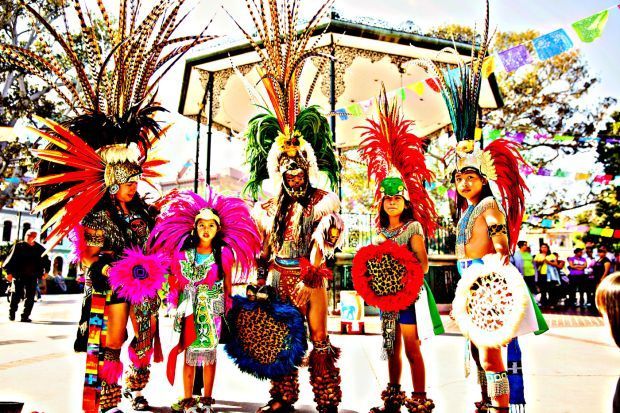 Steady thumps of the drum, bellowing conch and the spicy scent of copal incense signal the In Tlanextli Tlacopan Aztec Dancers. Massive feather plumes adorning their headdresses glint in the firelight, and are both exquisite decorations and a vital part of an ancient tradition. The dancers’ strong bodies flow through rhythmic movements in prayer, an offering to their ancestors.

The Tellez family dances with pride and confidence — and fire, a ritual that represents humility and discipline. The men and women hold their heads high, and even the little ones are unafraid. They are among the most stunning examples of a pre-Columbian tradition that has survived in the Mexico City area for centuries.

At the 11th annual Celebraciones de la Gente, the In Tlanextli Tlacopan Aztec Dancers will share their traditions Saturday and Sunday, Oct. 25 and 26 at the Museum of Northern Arizona.

Guadalupe Tellez has an intricate role in opening what she calls the “window" to her family’s Aztec culture. She explains the indigenous meanings behind each ritual as storyteller and narrator. She is also the sahumadora, or smoke-keeper, and blesses the dancers’ circle with copal incense.

“We take this as an opportunity, as a cultural exchange,” she said. “Any time we can talk to people who don’t know about it, it’s an opportunity for us to open doors, to open minds and to open hearts.”

Tellez explained that due to misconstrued media and pop-culture, the Day of the Dead is perceived as the Mexican or Spanish version of Halloween, which is not accurate. The troupe’s mission is to bring an understanding to the public about the Day of the Dead ritual surrounding Mictlantecuhtli.

Much of the culture was lost in translation or erased through death during the Spanish conquest. Roman Catholic conquistadors made words in the native tongue of the Mexico City area, Nahuatl, fit the Spanish lexicon.

Tellez said Aztecs didn’t believe in gods, but rather celebrated “energies” and paradigm representations of life and death.

“In Spanish, they used Dios — god — and that’s where the misunderstanding was,” she said. “For example, Mictlantecuhtli, people would say, oh, they’re worshiping the ‘death god,’ which is far from the truth. It’s worshiping the representation of what comes next.”

Tellez said the tradition survived in part by corresponding to Roman Catholic feast days like All Souls Day, and today there is more freedom of expression.

“We don’t have to hide anymore," Tellez said. "I think that’s why we have this resurgence of people willing to hear us and willing to learn more about Día de los Muertos and indigenous traditions.”

In Tlanextli’s Day of the Dead ritual represents mictlan, the skulls. Their movements are an offering to both Mictlantecuhtli and their ancestors.

“When we dance, it’s a way of sending them our prayers,” said Tellez, noting Aztec prayers are more physical than vocal. “Our dancers dance stories, and every movement we do is a connection, a way that we speak without words, and it’s a way that we pray.”

Tellez noted non-indigenous people painting their faces like the skull is not disrespectful as long as they "come with an open heart. Who comes because they want to venerate their loved ones and share their grief or their happiness — that’s what Día de los Muertos is all about.”

The intricacy of regalia honors these symbols, and Tellez said denotes the status of their family. The longer they practice, the more progress must be shown in beadwork and headdress adornment.

The dancers represent the jaguar and eagle clans, symbols of nobility. The serpent symbol is revered in the Fire Dance. The traditional name is Xiuhcoatl, which means “precious serpent,” named for the way fire flickers.

Tellez said the Fire Dance is a physical story, a ritual that would traditionally take place every 52 years and signals the rebirth of their society. All the pueblos would destroy their most valued possessions and have a ceremonial bonfire at the pyramid in Mexico City.

In Tlanextli dancers represent different communities and each dancer will touch their legs, feet, thighs and arms to the fire.

Where: Museum of Northern Arizona

Taking a leap into a new line of work, Staci Kay fulfilled a dream by opening Mountain Top Tap Room in downtown Flagstaff.

Ruben Jose Chavez passed away at home with his family on February 4th 2020. He was born in Flagstaff in 1956 to Baudilio and Betty Chavez. Rub…

Haven Caspary Walker died suddenly from unknown medical causes on February 3, 2020 in Flagstaff. He was respected and loved by many in Flagsta…

National Weather Service officials said a large snow storm is moving across the Southwest from California, but Flagstaff will likely miss the …

Christian A. Plasencia of Williams AZ