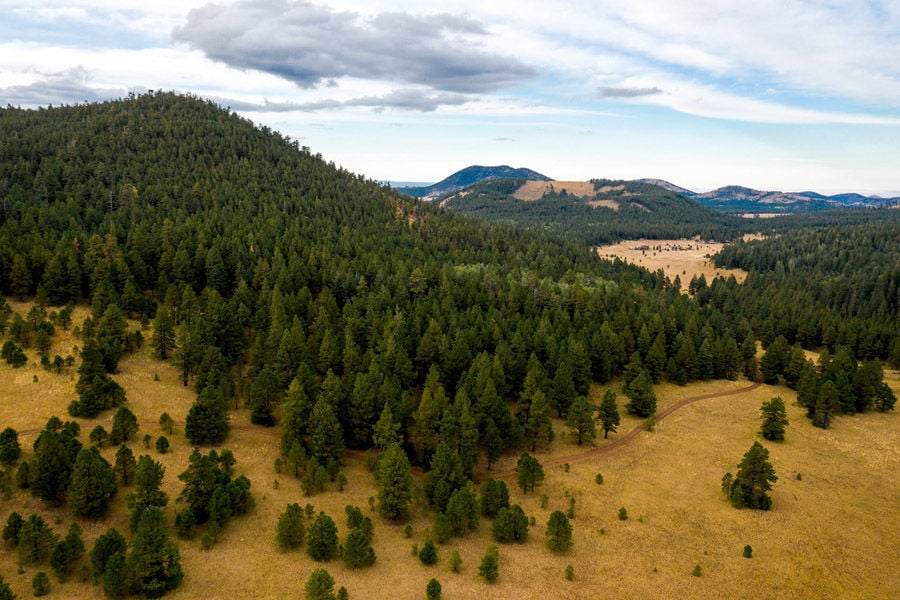 Better Place Forests released this aerial photo of the 160-acre property in Hart Prairie where the company plans to open a green burial site. 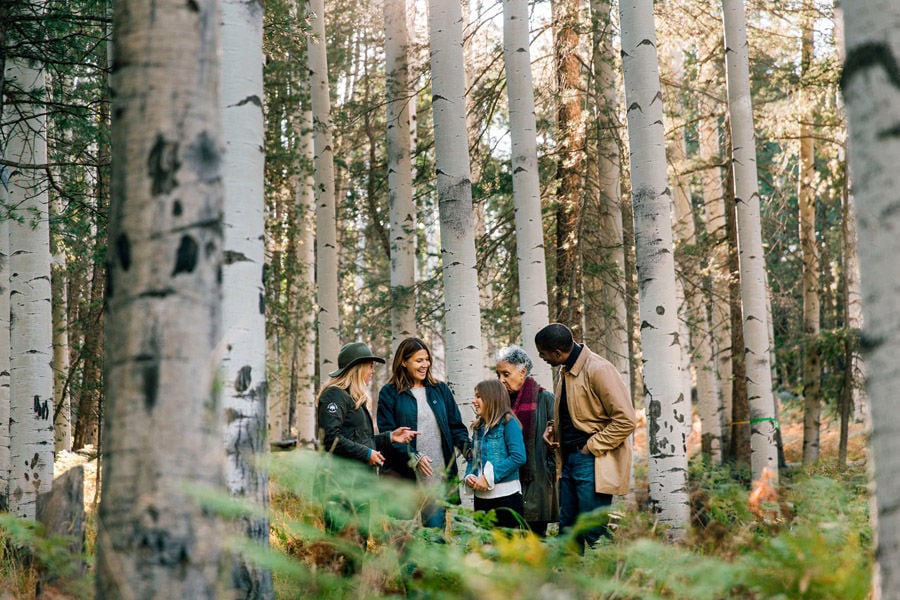 In this photo released by Better Place Forests, workers walk amid the aspen trees that can be purchased to bury a loved one at the base. 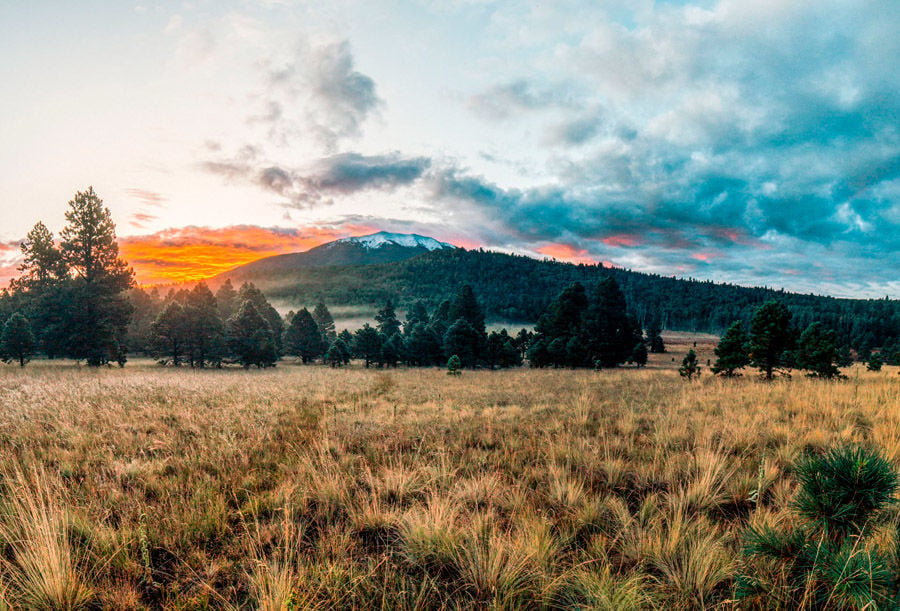 A view of the Hart Prairie property, in the shadow of the San Francisco Peaks, where Bett Place Forests wants to open a green burial site. 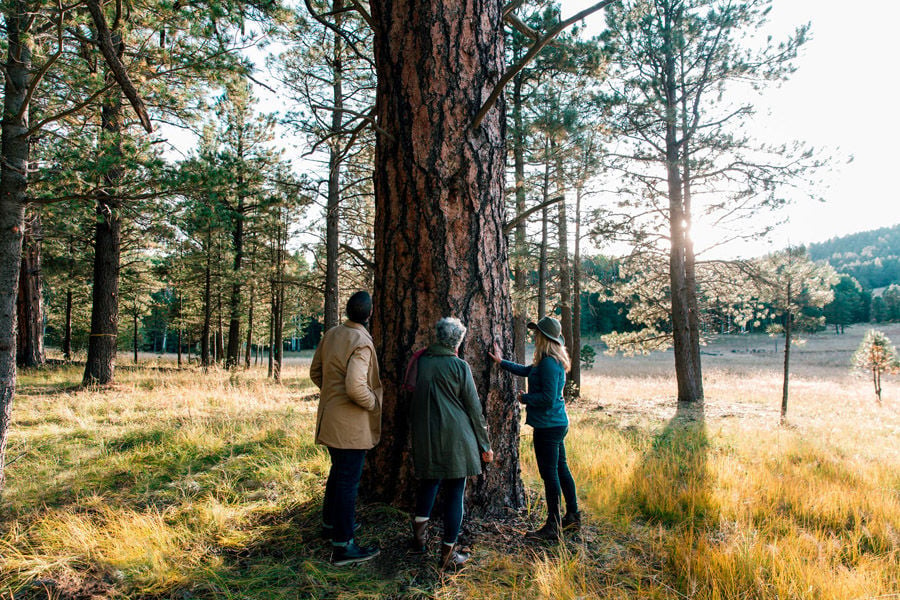 Ponderosa pines on private land in the Hart Prairie area will be available as final resting places as part of Better Place Forests, if the Coconino County Planning Commissions approves the company's application.

There can be no negotiating, no bargaining. Death — the great equalizer, the undiscovered country, as the poet said — eventually comes to us all. But the choices loved ones now have for interring and memorializing the dearly departed? That’s become something of a growth industry.

Options far beyond the traditional casket-lowered-six-feet-underground in manicured cemeteries, or the cremains-in-an-urn preference, abound. You, of course, can scatter ashes where ye may for free, and even — for a price — pack granny’s cremated remains into a firecracker and launch it skyward in a multihued sendoff.

Lately, though, the age-old concept of “green burials” has been revived, particularly among eco-friendly baby boomers. And a Silicon Valley startup is looking to develop its third swath of forest serving as burial sites on tree-studded private land near Flagstaff, in the vicinity of Hart Prairie and the western shadow of the San Francisco Peaks.

Better Place Forests, a California company that has developed “conservation memorial forests” in the arboristic wilds of the Santa Cruz Mountains and in the Redwood-rich Mendocino County area, now has its sights set on Flagstaff for a third location, and first out of its home state. The company has purchased 160 acres of private land, replete with ponderosa pines and aspen stands. If approved by Coconino County, it will offer people existing memorial trees — theirs in perpetuity — upon which to bury loved ones.

Trees start at $3,900. The package includes a burial ceremony in which ashes are mixed with soil at the base of trunk, a small brass marker placed at the base in lieu of a tombstone, and the planting of additional “impact trees” to promote growth and reforestation. The company estimates there are more than 20,000 trees in the 160-acre parcel.

Better Place Forests CEO Sandy Gibson said in a phone interview that his business appeals to people who believe in conservation and protection of forested land so that, even in death, people can work to keep trees alive. He and Mark Forster, the company’s head of land development, note that the property is zoned for mixed use, everything from single-family homes to bed-and-breakfast establishments, so they say their venture will protect the land from such development.

“We are working with the county to turn it all into a permanently protected conservation area,” said Gibson, who added that “we’re still finalizing a date to go before the planning commission. We’ve already met with county staff, and we’ve incorporated their suggestions into our formal application.”

Gibson and Forster did not reveal the exact location of the 160-acres of conservation easement, but said the site is off Forest Road 151, near the Hart Prairie Preserve. Better Place Forests has enlisted the help of the Northern Arizona University School of Forestry on preservation and management.

Cheryl Miller, NAU’s Centennial Forest Manager, said some of her students have helped clean brush and work on wildfire mitigation in the area, adding that the company has donated to NAU’s Forestry Club. (NAU, Miller said, has no formal partnership with Better Place Forests, though the company has hired several students as “forest stewards.”)

“I’ve been familiar with this green (burial) concept for a while and I think it’s an amazing model for how to conserve and preserve open spaces,” Miller said. “If they hadn’t worked that land, it might end up with developers.”

Gibson said that, in addition to NAU, Better Place Forests has consulted with local environmental groups, as well as the Arizona Historical Society and local Native American tribes.

However, some members of Native American groups are objecting to a burial forest adjacent to the Peaks.

Representatives of the Indigenous Circle of Flagstaff, an inter-tribal coalition, stated that, “This business development is proposed for the base of a mountain that is sacred, a beloved and revered being for 13 Indigenous nations and clans in this region. It would be common courtesy, but also an ethical and legal obligation according to the United Nations Declaration on the Rights of Indigenous Peoples, as well as U.S. law (American Indian Religious Freedom Act, at 42 U.S.C. § 1996), to obtain permission from Indigenous peoples with ancient relationships to the mountain before proceeding.”

The company's response: "Better Place Forests has been working with Coconino County to determine the proper permitting path and recently initiated its outreach program to the broad range of local constituencies including, but not limited to, conservation groups, the Audubon Society, local Native American tribes, the University of Northern Arizona, the Arizona Historical Society and the Greater Flagstaff Chamber of Commerce. We look forward to collaborating with the wider Flagstaff community to protect and preserve this beautiful forest."

Gibson said interest in the project has been strong, even though they have yet to aggressively market. In the spring, assuming permitting hurdles presumably will be cleared, Gibson said the company will give tours of the site to prospective buyers and accept tree reservations.

The New York Times in June reported that Better Place Forests has raised $12 million in venture capital funding. True Ventures partner Jon Callaghan, an investor in Better Place Forests, is bullish that the concept will take root and sprout, telling the Times, "The death services market is very big — $20 billion a year — and customer approval is low. The product is broken.”

Gibson said Flagstaff is a natural choice for the company’s third burial site because of its natural beauty and the community’s concern for forest preservation.

“This is a place that really speaks to people," he said. "When we first saw the Flagstaff forests, we realized it was a place we had to protect. This area is entirely surrounded by Coconino National Forest; it’s the largest in-holding that’s not protected. It needs to be protected.”

Tree "reservations" start at $3,900 (excluding the cost of cremation, done before Better Place Forests gets involved). Included: rights to the tree, a permanent plaque, spreading ceremonies and the possibility of upgrading to picking a tree that serves as a “family plot” catering to multiple burials. If your tree dies, it is replaced.

The ceremony involves the mixing of ashes with the natural soil and water in a trench at the tree's base before being covered. Trees are not adversely affected by the human remains in their root system, Gibson said. The company says it’s had soil tested by scientists at their other sites.

“Ashes are naturally inert, especially bone ash,” he said. “To make the ashes viable to the soil, it’s important to mix them with the local soil in the right ratio based on the PH balance of that soil. So that the natural bacteria of the earth can breakdown those ashes into the nutrients of the soil.”

Gibson’s motivation, other than an entrepreneur’s quest for a healthy bottom line, is to promote a “beautiful experience” for loved ones. He said he lost both his parents at a young age and the bleak image of a sterile cemetery still haunts him.

“You never forget, if you’ve lost someone, that final image,” he said. “Here, you have the beautiful image that this person laid to rest is part of something greater than themselves, the forest. My final image (for his parents) was a black gravestone in a crowded cemetery. People are looking for a final resting place that is positive for the environment."

Boomers and younger people, Gibson said, are disrupting what some call the "death industry." They want something more "meaningful" as a final resting place, he said.

Beryl Lignall of Point Arena, Calif., recently opted for a Redwood burial in Better Place Forests’ site in Mendocino. She said her mother originally wanted her cremated remains spread in the Pacific Ocean, which, of course, costs nothing beyond the cremation itself.

“But then I said to her, ‘Mom, you’ve never swam in your life, but you love the redwoods,’” Lignall recalled. “It is absolutely stunning, her tree, with a little brass marker and (ashes) of her cat with her. My partner and I are going to pick our own redwood for ourselves.

“For those of us who are tree-huggers, it’s a fitting way to go.”

Better Place Forests released this aerial photo of the 160-acre property in Hart Prairie where the company plans to open a green burial site.

In this photo released by Better Place Forests, workers walk amid the aspen trees that can be purchased to bury a loved one at the base.

A view of the Hart Prairie property, in the shadow of the San Francisco Peaks, where Bett Place Forests wants to open a green burial site.

Ponderosa pines on private land in the Hart Prairie area will be available as final resting places as part of Better Place Forests, if the Coconino County Planning Commissions approves the company's application.