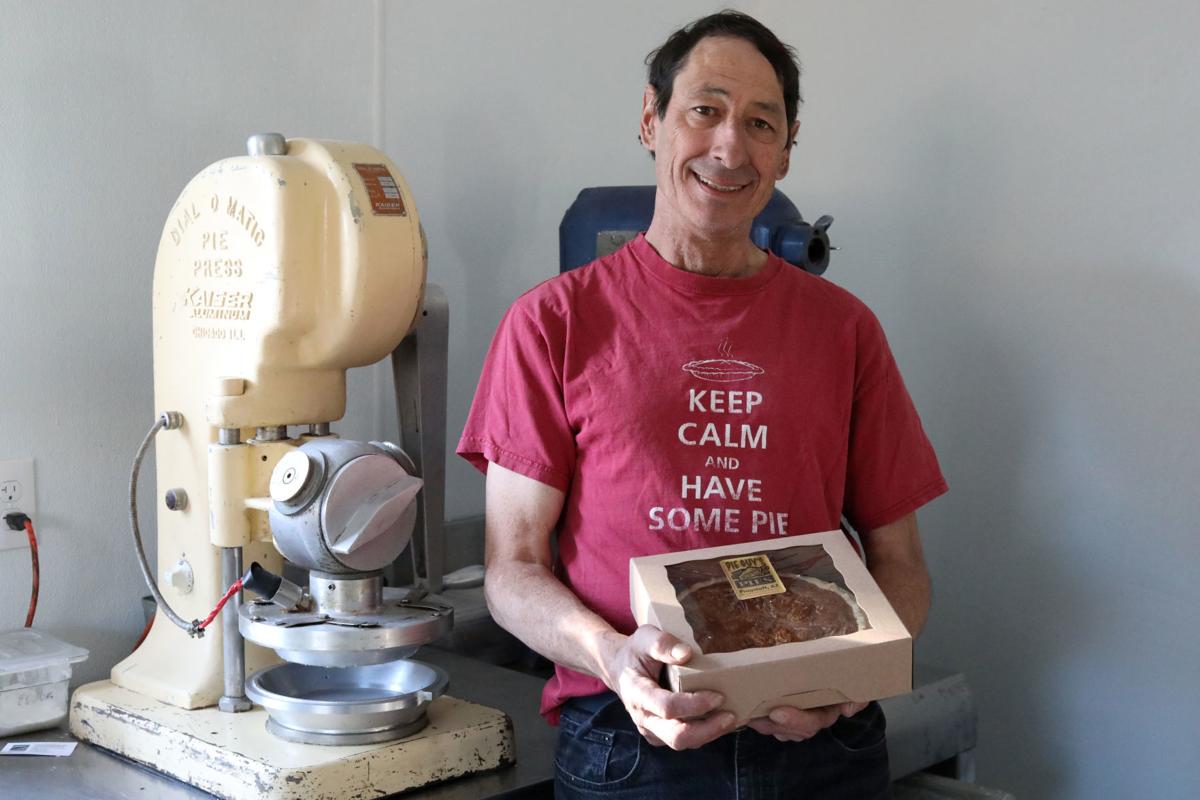 Charlie Lewis remodeled his garage to serve as a pie kitchen, with a pie press, mixer and refrigerator allowing him to produce pies for his business Pie Guy's Pies. 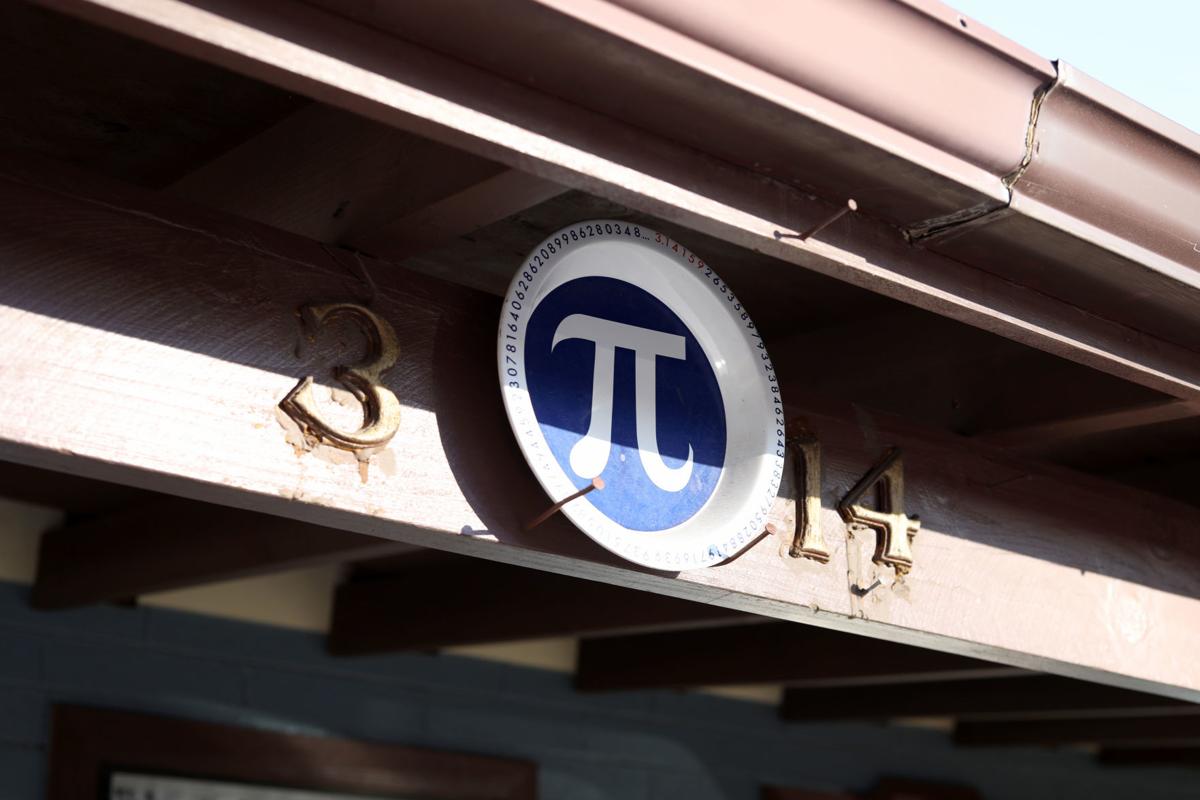 Charlie Lewis' home pie kitchen is behind his home, which is located at 3014 on his street, nearly identical to the mathematical constant Pi. 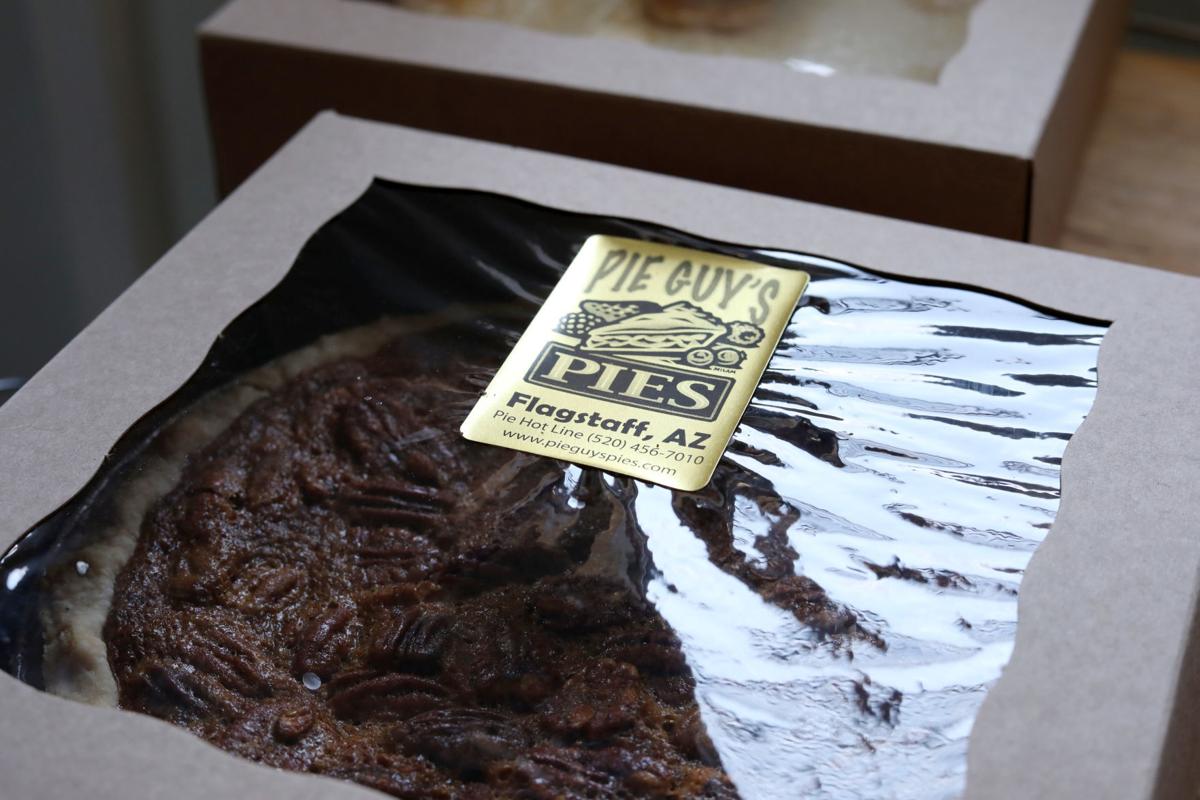 Among many other flavors, Charlie Lewis makes pecan pies for his business Pie Guy's Pies.

With his home kitchen completed, Charlie Lewis will now be able to offer Flagstaff homemade pies as he has in his other stops in Arizona and California.

Pie Guy’s Pies, as he has named his new business, is Lewis’ latest iteration of a skill he developed long ago. Originally from California, Lewis baked pies at a Marie Callender's in Las Vegas while attending the College of Southern Nevada’s culinary arts program. Later, Lewis landed in Bisbee, followed by Tehachapi, California, about two hours north of Los Angeles, baking pies along the way.

“I’d been living in Bisbee where I met my wife and I ran a diner there, Dot's Diner. Then we decided we didn't want to live on the border anymore,” Lewis said. “So we went to California, where I'm from, and we found a little town called Tehachapi. I decided I was gonna make pie there, but we ended up here because the financial scene for my wife is much better in Flagstaff.”

While in Tehachapi, Lewis started up TehachaPie and ran it for seven years. The move to Flagstaff came four and a half years ago, but the pie baking was put on hold.

“I was discouraged that I wasn't going to make pies anymore,” said Lewis, who works at Olive Garden making soups and sauces when not baking pies. “It was really hard to give it all up, especially when I looked into this garage. I knew that was a long way away.”

Lewis’ home kitchen, in the completely remodeled garage of his property, was a key part of the decision to buy the particular house. It also just so happens to be located at 3014 on his street, essentially the start of the mathematical constant known as pi.

“I would say for two years, nothing happened. And then about two years ago, we finally refinanced the house and made it possible financially,” Lewis said. “I tore down the (garage) door and built a door and the wall. But I couldn't do the work inside.”

With the help of local contractor Matt Lindquist, Lewis’ vision came to life, and his pie press and mixer found their home in the corner of his completed pie kitchen. The next challenge came from getting approval from the Health Department, with Lewis being a special case given his unique arrangement.

“It took almost, I want to say nine or 10 months, for the city to finally approve the plan,” Lewis said. “It was tough because the city was unaware of the regulations involved here. They weren't sure whether I could put a hood in here or not, or if I needed a hood and if I did I had to restructure the garage.”

However, the final approval finally came on Feb. 10, granting Lewis the go-ahead to bake away after a long run of hard work.

“The Health Department came in here and said they were very impressed with the kitchen,” Lewis said. “He came here four years ago and it was a garage. And I said, ‘Can I turn this into a pie kitchen?’ He gave me the approval, but he said it is going to take a lot of work.”

With Lewis ready to go, those interested in ordering a pie can contact him at his Facebook page, Pie Guy’s Pies, or by calling him up with an order. Lewis said he’s made most of his money selling pies at farmers’ markets, which he plans to continue in Flagstaff when there is space available. He also plans to be available in different locations around town, and pies can be picked up or delivered once an order is made.

Plenty of different flavors are available, but Lewis said BisbeeBerry was a popular option when he was selling them down south. A mix of blackberry and raspberry, BisbeeBerry’s only competition for top seller may have been the strawberry rhubarb.

Each pie also gets the image of its flavor stamped on top, but come March 14th, pies can also have the symbol for pi (𝛑) placed on top, a similar sight to what will greet them should they pull up to Lewis’ home and look up at his home’s address.

After baking pies in a few different cities, Charlie Lewis is now offering up a variety of options in Flagstaff through Pie Guy's Pies.

Charlie Lewis remodeled his garage to serve as a pie kitchen, with a pie press, mixer and refrigerator allowing him to produce pies for his business Pie Guy's Pies. 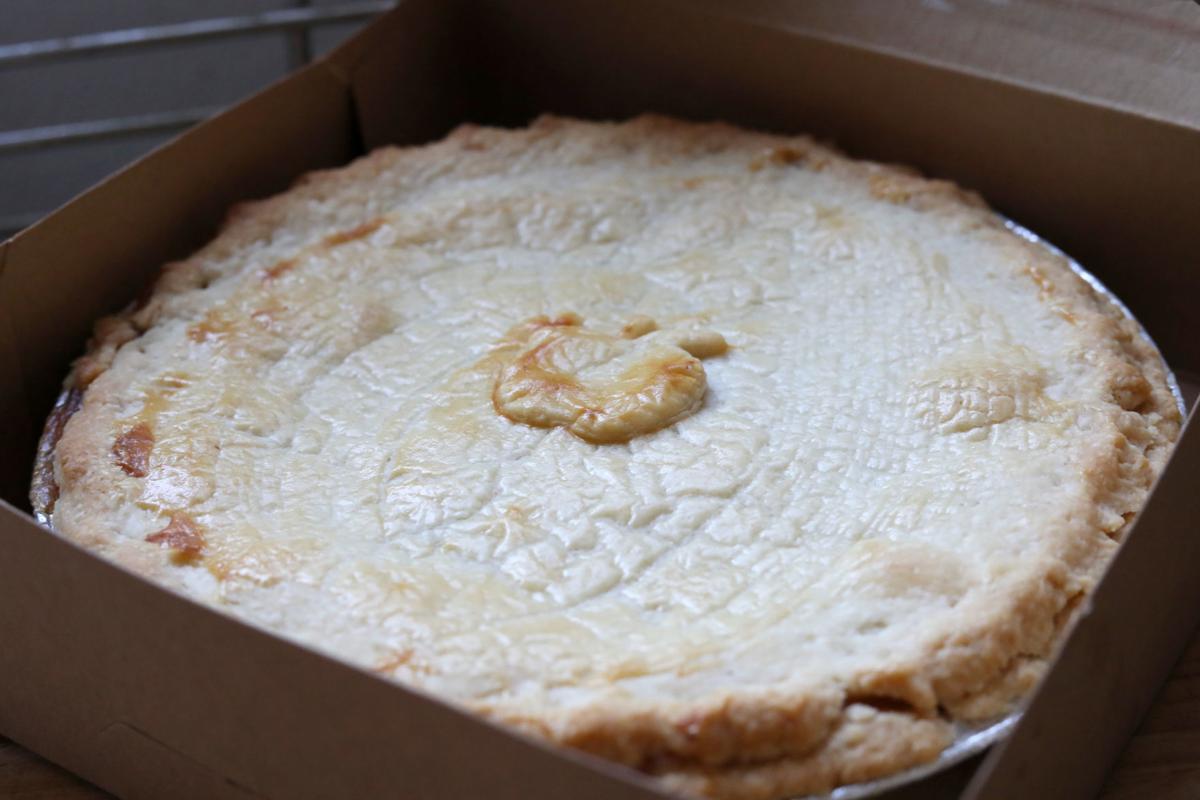 Each one of Charlie Lewis' pies is stamped with its flavor. 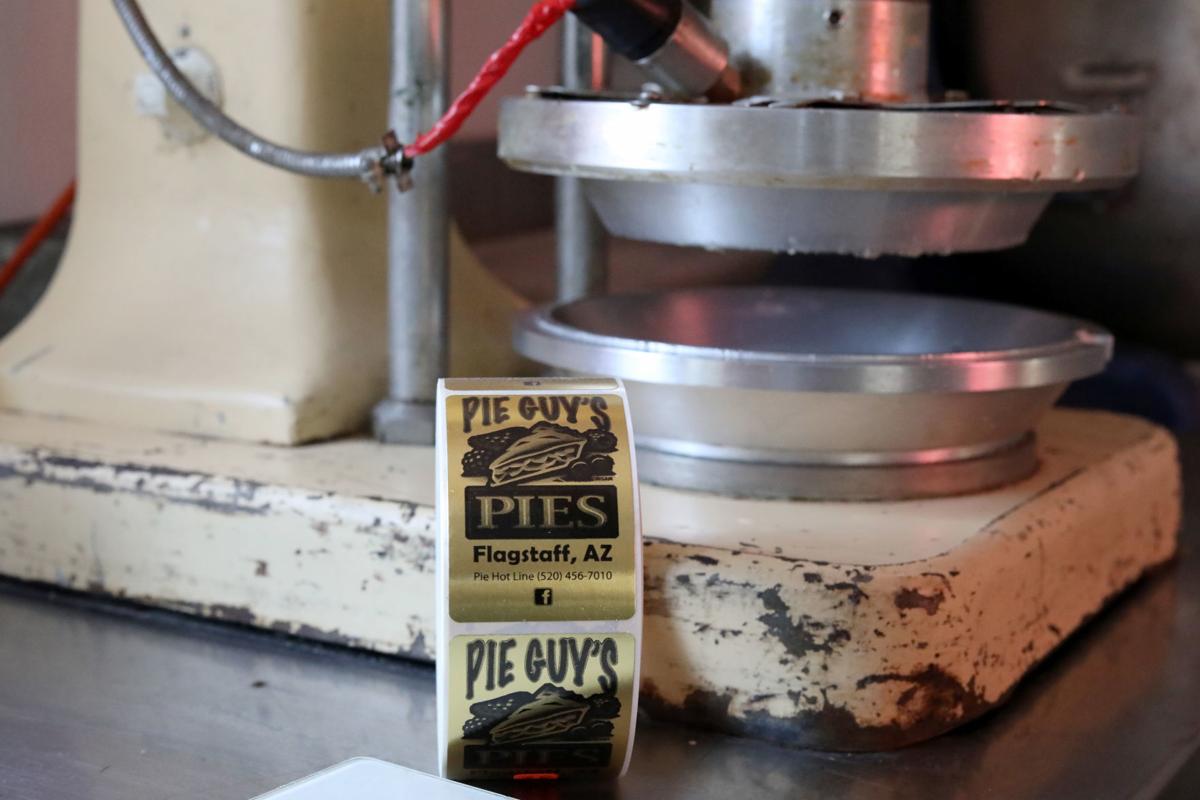 Pie Guy's Pies can deliver pies or have them picked up after orders are made online or by calling them in.

Charlie Lewis' home pie kitchen is behind his home, which is located at 3014 on his street, nearly identical to the mathematical constant Pi. 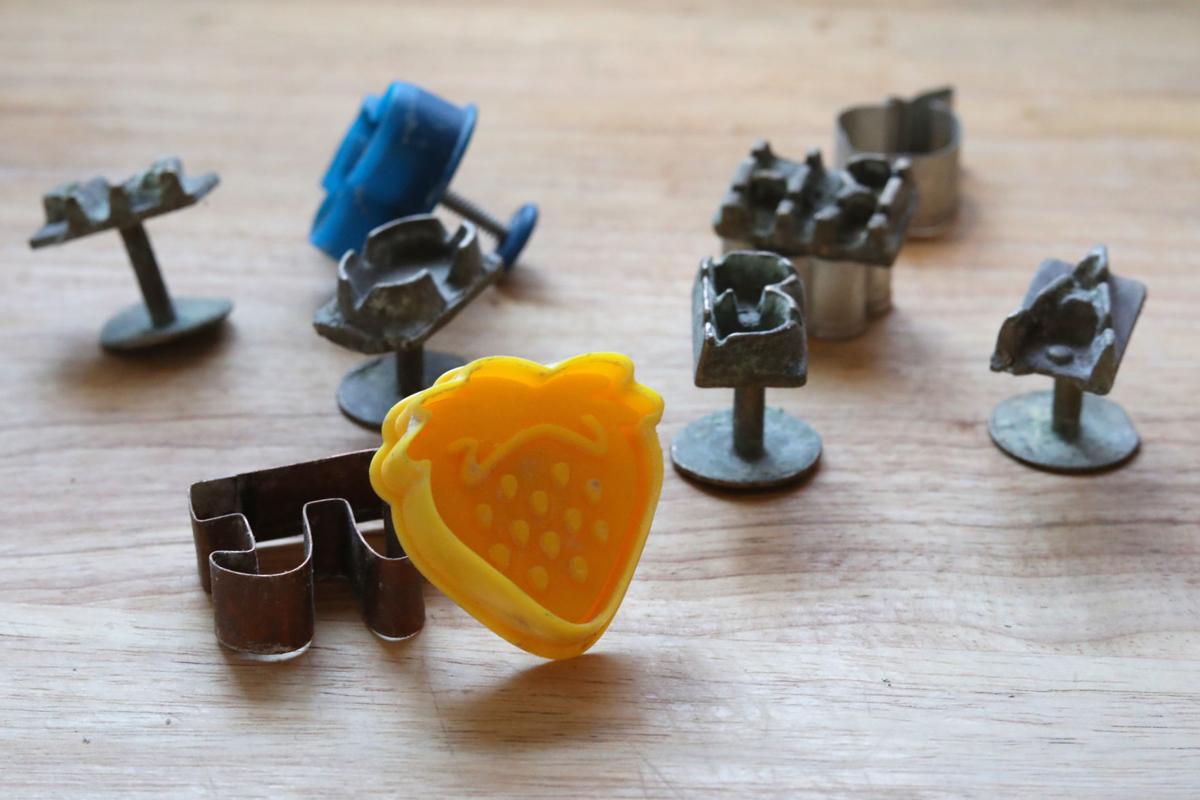 Each one of Pie Guy's Pies is stamped with its flavor on the top, though on March 14th the symbol for Pi can go on instead.

Among many other flavors, Charlie Lewis makes pecan pies for his business Pie Guy's Pies.