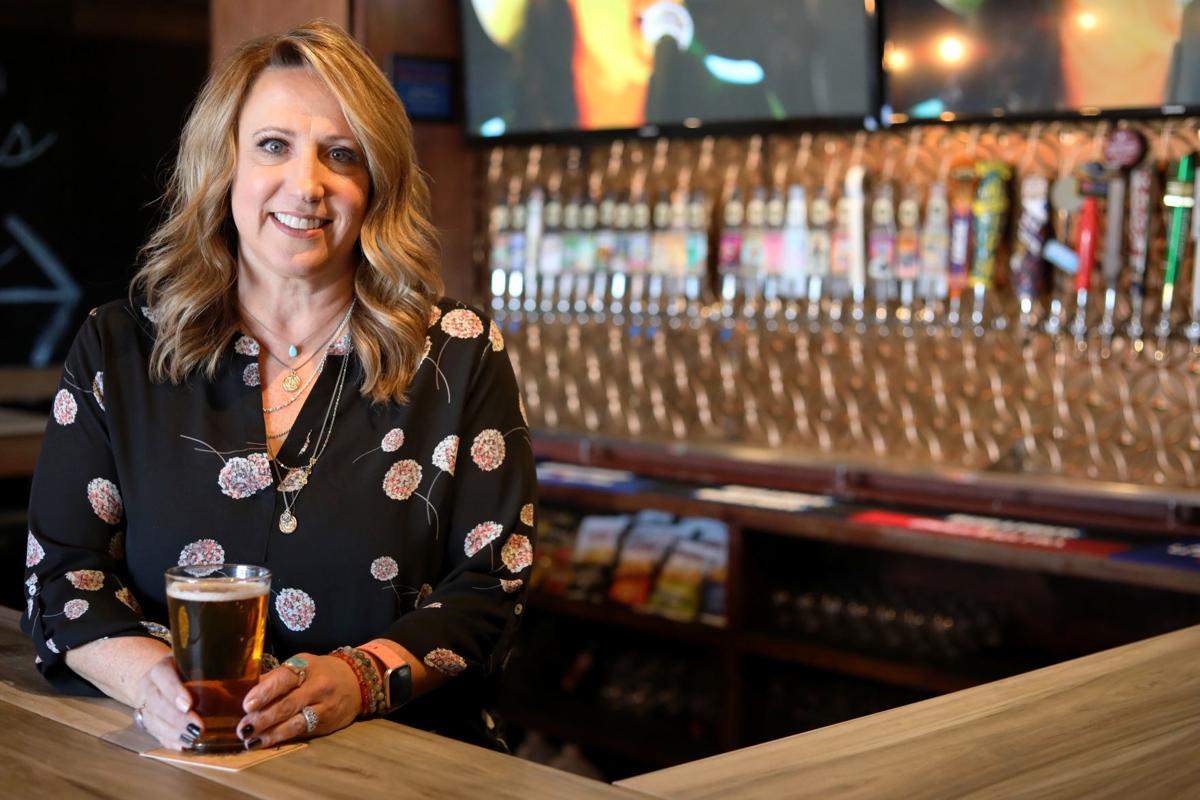 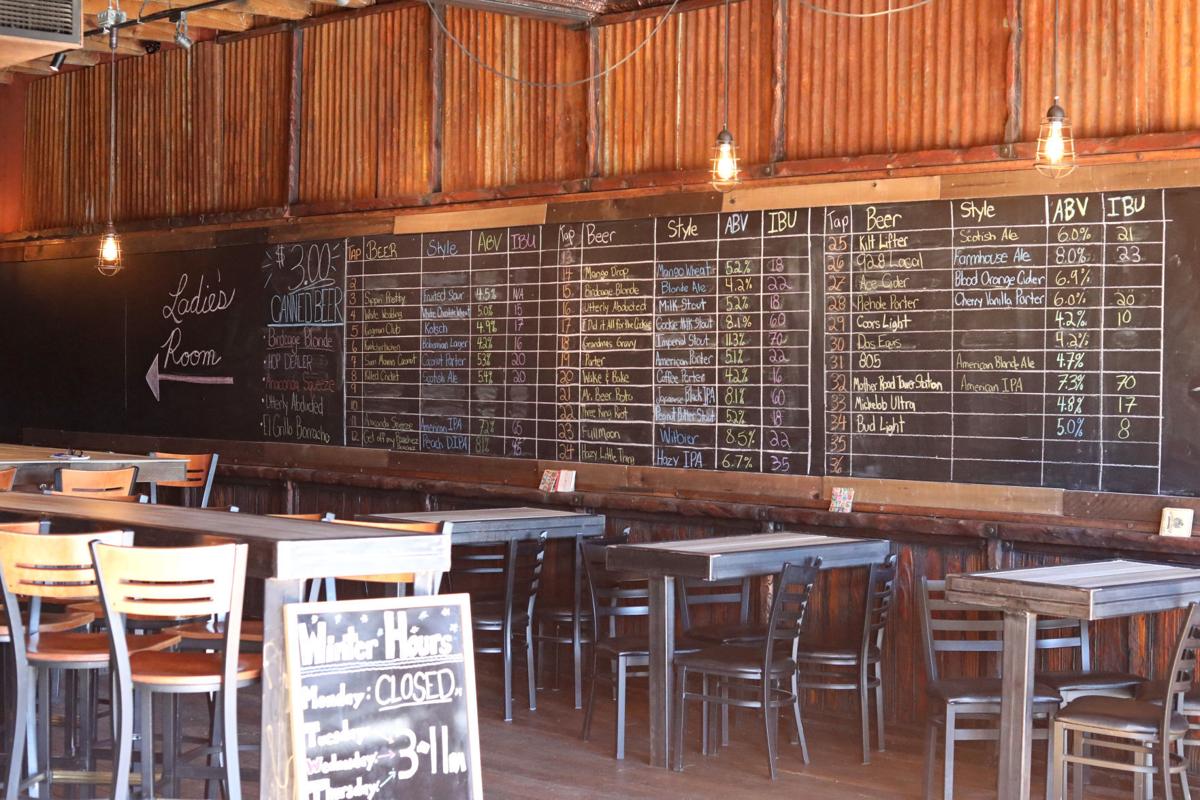 Mountain Top Tap Room's remodeled tables match the bar installed in the center of the building. 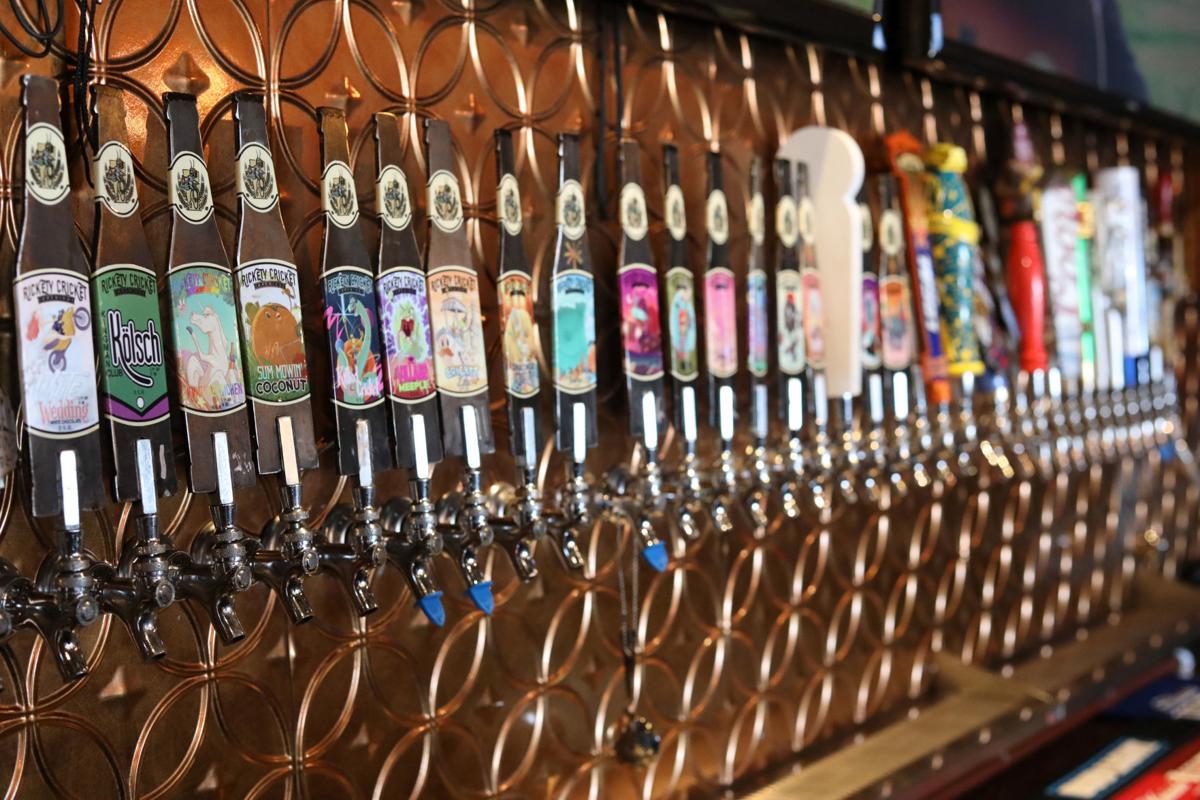 More than 30 beers are offered on tap at Mountain Top Tap Room located at 10 E. Route 66. 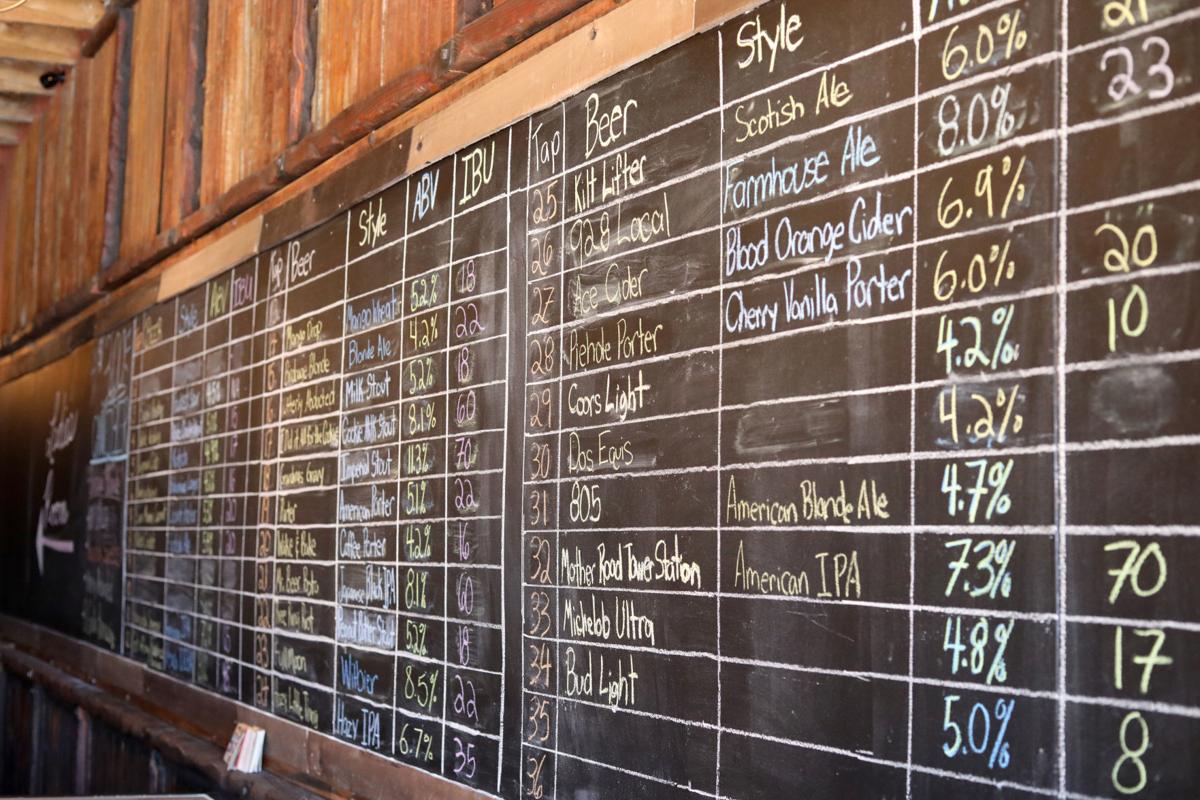 More than 30 beers are offered on tap at Mountain Top Tap Room, with the list posted along one of the bar's walls. 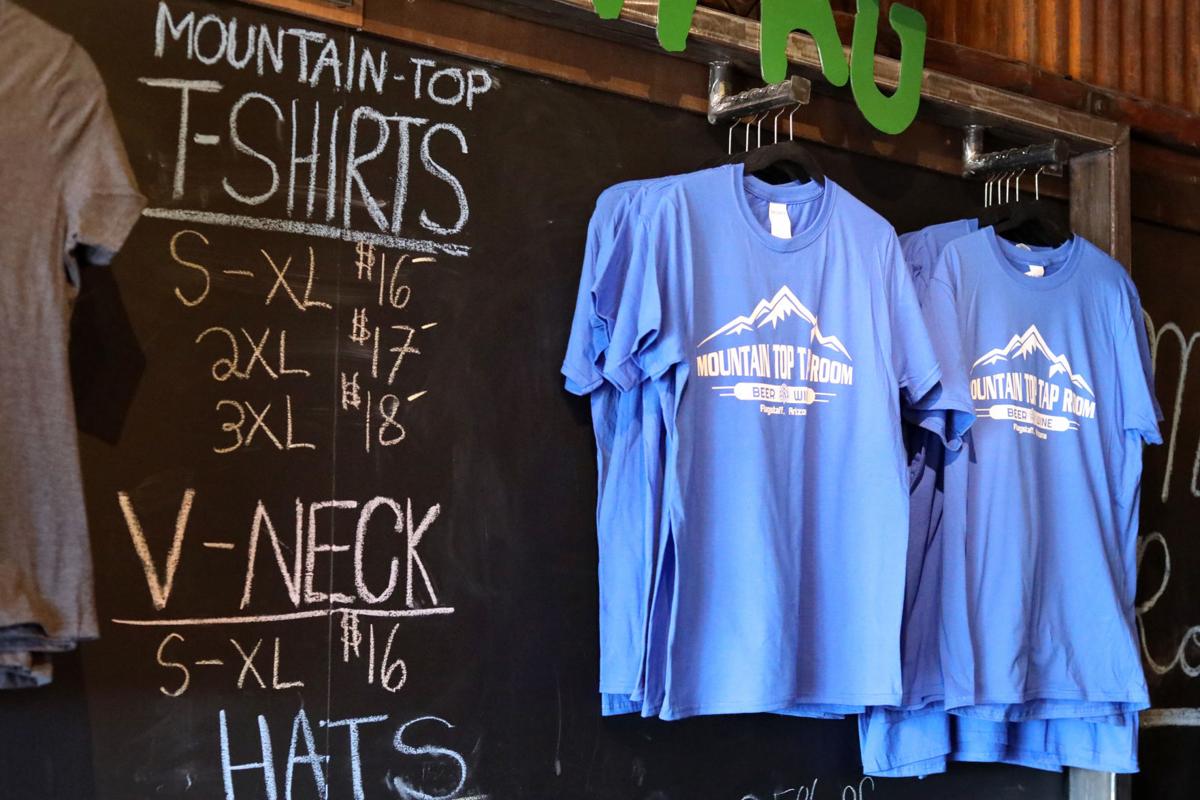 T-shirt hang along one of Mountain Top Tap Room's walls. 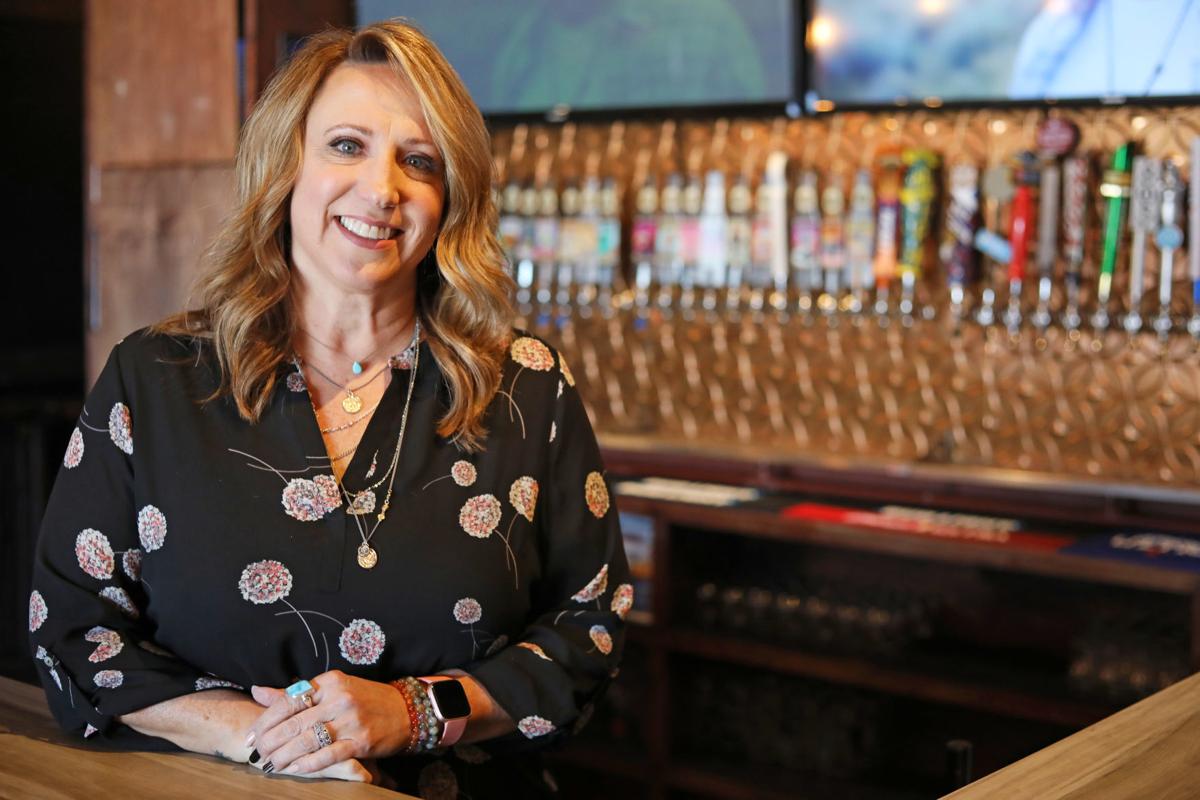 Taking a leap into a new line of work, Staci Kay fulfilled a dream by opening Mountain Top Tap Room in downtown Flagstaff.

“I have personally wanted to own a bar. Being born and raised in Flagstaff, I was looking for the opportunity to do something here,” Kay said. “We're having so much fun, we really are. It's a lot of work. A second career, 50 years old. Who would have thought?”

Taking over the spot formerly held by Rickety Cricket Tap Room on Route 66, Kay’s new tap room got its start thanks to her friendship with the owner of the previous tenant. Kay, who formerly worked for State Farm Insurance for much of her life, also previously worked at Kingman’s House of Hops, owned by Rickety Cricket owner Terry Thompson.

“Terry, who owns Rickety Cricket, is a good friend of ours. And he brought us the proposal of buying the bar,” Kay said. “It’s something I've always wanted to do.”

A fourth-generation resident of Flagstaff, the historic building that houses Mountain Top on Route 66 interested Kay.

“We wanted, honestly, to start in a small capacity like this,” Kay said. “The space is a smaller space, but we couldn't pass up the building. The historic building that this is, it's amazing.”

Before Rickety Cricket, which opened in late 2018, The State Bar spent more than four years in the prime space along the historic road. Rickety Cricket had already redone the bar, with Kay and her family helping to tweak a few things in order to further update the interior and match the style Rickety Cricket started.

Kay’s husband Bob built the tables around the tap room, matching them to the bar at the center of the building. Some of the seating was slightly changed near the windows, while the floors were sanded down and stained, and the blackboard was repainted.

The rest of the family has helped early on as well, according to Kay, with her husband also coming up with the name, her son doing the logo and her daughter helping cover some of the legal work. Mountain Top opened in early October, with Kay hoping it would offer a relaxed, inviting area for people to come in and relax.

Rickety Cricket also helped Mountain Top get started by continuing their beer’s availability in the tap room, with many of the taps offering a wide selection from the Kingman brewery. Most importantly, Anaconda Squeeze IPA has remained a popular choice in Mountain Top’s early days.

“Most of it started with Rickety Cricket, all the Rickety Cricket beer they offered. We kept some of it,” Kay said. “As the taps cleared up, then that's when we needed our distributors.”

Among the more than 30 taps behind the bar, Mountain Top has local mainstays Tower Station IPA from Mother Road Brewery and 928 Local from Wanderlust Brewing Company.

“We wanted to have local people, local breweries in our bar. That was important for us to support each other,” Kay said. “It's nice to have it, it really is. The patrons like it, but honestly the business owners are appreciative too.”

With plenty of beers available, prominently displayed on the chalkboard at the right side of the tap room while specials are often posted on the tap room’s social media accounts, Mountain Top also sells wine, which has led to the inclusion of mimosas.

“I'm like a mimosa connoisseur, we make up all kinds of mimosas since we love them,” Kay said. “Different flavors, mixing flavors.”

Among the options is a mix with one of this past summer’s most popular drink options across the country. Calling it a “ClawMosa,” Kay said Mountain Top has experimented with making a mimosa mixed with White Claw. Truly, another popular hard seltzer brand from this past year, is also available at Mountain Top.

As the bar has become more comfortable serving its patrons, it has started looking to bring live music back into the venue, which began with Black Lemon performing on Feb. 7. Kay said the two televisions up behind the bar can also be used to hook up video game consoles, primarily on Wednesdays or Fridays, with the tap room inviting players to compete in a tournament on the first Wednesday of each month.

Open six days a week, including until 11 p.m. for three days of the week and until midnight on Friday and Saturday, it has been a significant lifestyle change for Kay after years of much more regular office hours.

“It's an adjustment, it is a big adjustment. The physical labor, plus the hours to stay awake. Those hours and then being on your feet that whole time.” Kay said. “My father was an agent here in town and then we had the opportunity to have our own agency. I have done insurance since I was 16 years old. So now in my 50s, I'm owning a bar and it's the craziest thing I think I've ever done.”

Mountain Top Tap Room's remodeled tables match the bar installed in the center of the building.

More than 30 beers are offered on tap at Mountain Top Tap Room located at 10 E. Route 66.

More than 30 beers are offered on tap at Mountain Top Tap Room, with the list posted along one of the bar's walls.

T-shirt hang along one of Mountain Top Tap Room's walls.