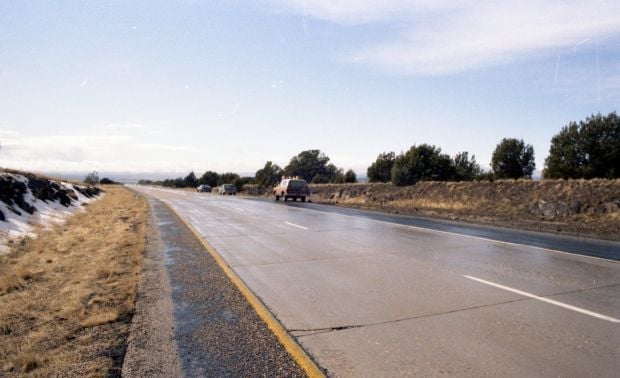 The body of an unidentified woman was found face down on Feb. 14, 1982, under a cedar tree about 25 feet north of westbound Interstate 40 about 10 miles west of Williams (Coconino County Sheriff's Office/Courtesy photo) 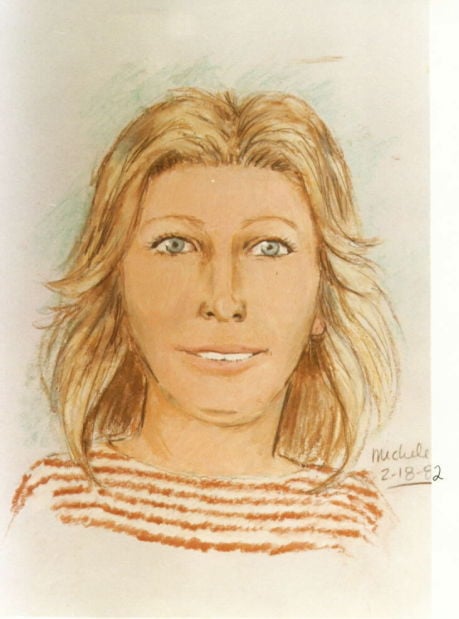 Composite sketch of Valentine Sally, whose body was found off Interstate 40 near Williams on Feb. 14, 1982.

Her body was found face down under a cedar tree off Interstate 40 near Williams in 1982.

What Coconino County Sheriff’s Office investigators know: She was white, between 16 and 23 years old, 5-feet, 4-inches tall, 120 to 125 pounds, and she had shoulder-length blonde hair. There was no way to tell what color her eyes were, and the animals made taking fingerprints impossible.

She was murdered by being suffocated or strangled -- the manner of death is unclear.

“We’ve got no idea who she is,” said Chuck Jones, volunteer investigator for the Cold Case and Missing Persons unit for the sheriff’s office. “Still don’t.”

She is called “Valentine Sally,” probably because her body was found on Feb. 14. She has some rough well-healed scars on the top of the left foot, and a 2-inch diagonal scar on the back of her right thigh. She has moles on her chest above the right breast, has pierced ears, and a lower right molar had been opened for a root canal.

Hers is one of 38 cold cases being investigated by the unit. The unit also investigates missing persons reports, Jones said. The unit is staffed entirely with volunteers, who spend varying lengths of time with the unit. Retired National Park Service investigator Joe Sumner works the unit with Jones.

Jones, who is a retired FBI agent, took on a case in 2005 at the request of the sheriff’s office, and the unit was born.

“It bugs me,” Jones said of his interest in investigating cold cases. Just before he retired from the FBI, he caught a case from the Navajo Nation. Two young people had been gunned down inside their vehicle in Greasewood Springs. The case went cold.

“We couldn’t make it happen,” Jones said. “It drove me nuts.”

The mother of one of the victims would continually call him to find out on the progress of the case.

“Those things just bother you,” he said.

He worked the case after he retired, and it was his persistence that led to a lucky break and a suspect four years after his retirement date. The man was charged, and he is now serving two life terms in federal prison.

“I’ve been doing it ever since,” he added.

Now, he continually culls through old cases like Valentine Sally’s. When she was discovered, she was wearing only size nine “Seasons” brand designer jeans. A maroon and white striped pullover sweater and size 36C bra were found nearby. When the case went cold, her remains were buried in the cemetery in Williams.

The case had been solved for a while. She had been misidentified in 1984 as a young woman from Florida who had run away from home in 1980 and a death certificate was issued. In 1986, the young woman reunited with her family, and the investigation was brought back to Square One.

A hope was renewed in solving the case of Valentine Sally and several others when the federal government awarded the sheriff’s office a $300,000 grant to do DNA testing on homicide remains of unsolved cases. One case proved fruitful, but the DNA results for Valentine Sally were placed into a national database and came back negative.

“What that means is no relatives have put any DNA evidence into the system,” Jones said. So the case remains unsolved.

“This isn’t exciting work,” Jones said. “But if you don’t do anything, nothing will happen.”

If anybody has information about this case, contact the sheriff’s office cold case division at 774-4523, or visit the sheriff's office Facebook page for cold cases.

The body of an unidentified woman was found face down on Feb. 14, 1982, under a cedar tree about 25 feet north of westbound Interstate 40 about 10 miles west of Williams (Coconino County Sheriff's Office/Courtesy photo)

Composite sketch of Valentine Sally, whose body was found off Interstate 40 near Williams on Feb. 14, 1982.