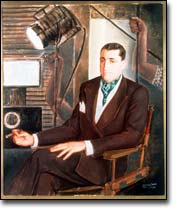 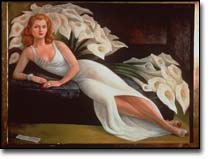 Art excelencia
By RENEE GUILLORY
Special to the Sun

Natasha and Jacques Gelman watched it all come to life, became its proudest patrons, and bequeathed it to the world.

And now, the Gelman collection has come to the Phoenix Art Museum, its last stop, for now, on a world tour that has rocked fans of 20th century art in Paris, Sydney, Rio de Janeiro, San Diego and Dallas.

"Frida Kahlo, Diego Rivera, and Twentieth Century Mexican Art" is open to the public through June 24. It should not be missed.

The legendary Gelman collection is thought to be the largest private collection of Latin American art anywhere. This show includes a substantial portion of the Gelmans' Mexican art holdings — more than 75 works spanning more than 90 years are included. The collection features works by 20th century giants like Frida Kahlo, Rufino Tamayo, David Alfaro Siqueiros, and Diego Rivera, as well as contemporary pieces by Paula Santiago, Gerardo Suter and Miguel Caldern.

Once the Gelman works find a home in a Mexican museum, it's unlikely that even significant portions of the collection will travel together again.

Natasha (ne Natalia) Krawak and Jacques Gelman met in Mexico City, when Jacques was setting up a new film distribution branch for his production company and when Natasha was traveling with her mother. In a sense, they both were expatriates from European aggression — Natasha from Czechoslovakia, Jacques from Soviet Russia.

Their life together in Mexico began when they married and settled there in 1941. Jacques' successful film company kept their social circle expanding to include the Hollywood jet set and New York and Parisian film societies.

While not Rockefellers, the Gelmans were successful enough to pursue a passion they had in common — art and art collecting.

Phoenix Art Museum Latin American curator Beverly Adams thinks that it's not possible to overstate how important art was for the Gelmans.

"I think art collecting is an obsession — yes, a sickness, but a wonderful sickness," says Adams. "It's just extraordinary that [the Gelmans] were of such like mind on how to go about this."

"I meet a lot of different collectors," continued Adams. "The ones who are most successful are the couples that do it together."

Adams cautions that it's easy to try to explain the Gelmans' life work collecting Mexican art as a sentimental pursuit, designed to fill the vacuum created by their inability to have children — and it would be inaccurate to do so.

"You can wrap their love story or their childlessness around their art collecting," she says. "But to create this amazing collection was no small thing. They worked hard at it. And they had a strong sense of responsibility and patronage — it was Natasha's mission to place these pieces in public institutions.

"This, after all, is one of the traditional ways that elites have secured their power," added Adams. "And the 'portrait of power,' so-called, is a staple of this exhibition."

The Gelman show has several strengths that will appeal to everyone, not just lovers of the familiar murals that have come to define Mexican art for the world.

First, says Adams, "the Gelman works show the diversity of art being produced in Mexico between 1920 and 1940."

"When we think of Mexican art, we tend to think of the muralists," says Adams. (To be sure, these artists and some of their studies for murals are represented.)

"But there is also work which represents experiments in surrealism, abstraction and new ways of doing portraiture," she continues. "These experiments were not always aligned with social or political movements."

The Gelman show also includes art from the vital period during which Mexican art was eclipsing that produced in the U.S. or other Latin American art communities. Many U.S. streetscapes and architecture were forever changed by the influence of early 20th century Mexican artists, and David Alfaro Siqueiros' works inspired Jackson Pollock — indeed, Siqueiros taught Pollock at a series of New York workshops he gave. Pollock's "plastic accident" theory is borrowed from Siqueiros.

Perhaps most importantly, says Adams, the exhibition shows the keen eye of collectors.

"The Gelmans had both vision and the means to engage in the contemporary art around them ," she says. "You're seeing what they valued, how the Gelmans saw their time and how they connected with it."

In short, what visitors see in this exhibition is extraordinary.

Vibrant blue and sandstone yellow walls greet visitors to the Phoenix Art Museum's Steele Gallery, which underwent weeks of renovation to show off the striking works in this exhibition. Viewers see first, appropriately, two portraits of Natasha Gelman (Rafal Cidoncha and ngel Zrraga) and one of Jacques Gelman (also Zrraga).

A quick turn and two large banks of photos from Natasha and Jacques' star-studded social gatherings appear (this is perhaps the only drawback in the show — the uncaptioned photos lie within cases and one must follow a small chart posted on the wall to see whom the couple are sitting or dining with).

Visitors wind through the Steele Gallery to view 11 pieces by Frida Kahlo — a virtual gold mine since few collectors or institutions have such a large assembly of her works.

"The Frida that the Gelmans knew was a prankster, a fun-loving woman," notes Adams. "So their Kahlos reflect their relationship with her and they simply did not buy the works of hers which were more grisly."

Which is not to say that the Kahlos in the exhibition are any less powerful because they are less graphic. There are a number of witty and subtle iconographic self-portraits in which Frida is wearing jewelry and costumes which evoke different regions and histories in Mexico. Also included is a portrait of Natasha Gelman. Other self-portraits included — such as "Diego on my mind," "Self-portrait with monkeys," and "The love embrace of the universe, the earth (Mexico), Diego, I and Senor Xolotl" will perhaps be familiar to viewers and refer to Kahlo's on-again-off-again relationship with Diego Rivera.

In fact, Diego Rivera's 1943 portrait of Natasha Gelman was the first piece the couple ever commissioned, and it fronts another room of the gallery containing more of Rivera's works.

"There's a funny story about this portrait," says curator Adams. "Rivera was already famous at the time. Natasha prepared for the sitting by getting all dressed up, with various bits of jewelry that she owned — much of which had been given to her by other men she had known before marrying Jacques. Jacques told her 'you can't do this sitting today.' Then he went and bought her new jewelry. When she did the sitting, she was wearing only his jewelry."

The painting itself — seemingly just another society portrait — is more complicated than it first appears. Rivera used Natasha's pose and her long white dress to cast Natasha as one of his famous icons — the calla lilly. It's a terrific visual pun and a stunning work. The implication for Natasha, that she herself was part of the Mexican artscape, must have been enormously flattering, all the more so because it came to be true.

Works of lesser-known Mexican artists such as Gunther Gerzso, are a delight. One of his paintings, "The Cat from London Street," might not have even survived if not for Natasha Gelman. Gerzso, a colleague of Jacques' who also designed film sets, was recently separated from his girlfriend and painted a lonely, abstracted, and domestic scene through his apartment window and featuring a large blue cat on his sill.

Adams recalls that Gerzso thought it was his melancholy he was painting and he was very embarrassed about it. Fortunately, Natasha did not agree and she bought it on the spot; she saw what viewers of the exhibition will see — a terrific piece that evokes jazz and the excitement of city life.

While the Gelman collection includes many painters (often those who utilize folk tradition and figurative styles, rather than abstractions), it also includes more recent works in photography, mixed media and sculpture.

"It's an example of not so much changing taste but of how contemporary Mexican artists have been expanding on a very strong painting tradition in Mexico," says Adams. "New Mexican art — using found materials, for example — takes advantage of history and pushes the envelope of the tradition and sources of Mexican art."

"These artists are both playing with and rebelling against tradition. You can still see the connections between Paula Santiago, who uses her own blood and hair in her pieces, and Frida Kahlo — after all, what's more autobiographical than your own blood?" laughs Adams.

"Contemporary artists are in a constant dialogue with earlier artists. It's just that their tradition doesn't enclose them," she continues. "Many artists wanted to break through the so-called Cactus Curtain — the indigenous themes and icons that felt so confining in the 1960s."

The highly accessible Gelman collection documents this visual evolution succinctly, intimately; the collection itself also enlivens the ongoing dialogue between past and present that curator Adams describes.

Jacques and Natasha Gelman nurtured Mexican artists all their lives as collectors. After Jacques died in 1996, Natasha continued collecting until her own death in 1998. Their estate will continue to acquire important works by Mexican artists for quite some time, thanks to art aficionado and Vergel Foundation president Robert Littman, a long-time family friend who will carry on their work.

For now, though, the Gelmans alone remain two of our best guides through the history, diversity, and beauty of 20th century Mexican art.

The Jacques and Natasha Gelman Collection" runs through June 24 at the Phoenix Art Museum.

An upcoming educational program related to the exhibit is:

Dr. Beverly Adams, curator of Latin American Art, Phoenix Art Museum, discusses an idea called Mexicanidad and how it is reinterpreted by various contemporary artists in the Gelman exhibition.

For information on other events, exhibition passes, or museum hours, contact the Phoenix Art Museum at (602) 257-1222 or go to www.phxart.org.

Letter to the Editor: Historic parts of Flagstaff need protection

How sad that the multi-story building creep is spreading north from South Milton into Flagstaff’s downtown. I recently noticed the monstrous t…