Become a Member
Read Today's E-edition
Share This
Amid visitor groundswell, newly developed trails in Sedona lead to quietude
0 Comments
Share this
1 of 8 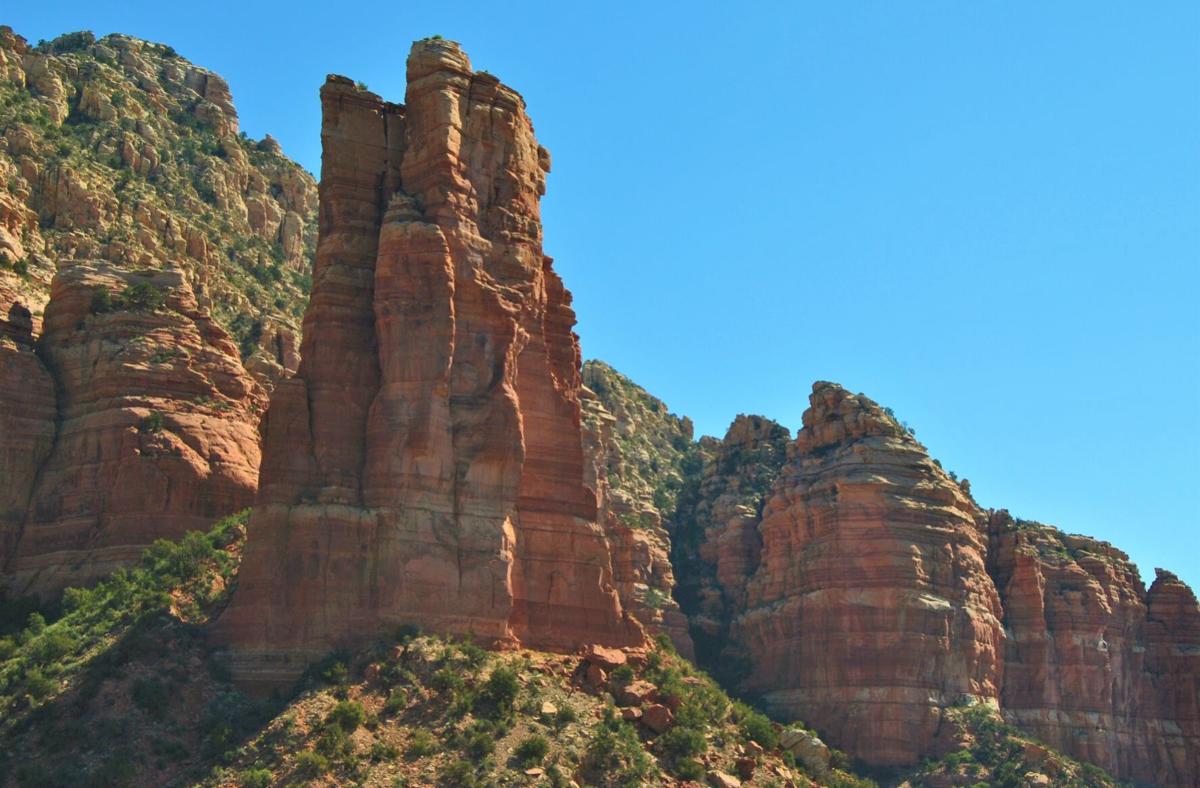 The red rock formation known as Rabbit Ears, adjacent to Munds Mountain, gave the new Rabbit Ears Trail in Sedona its namesake. It’s one part of the destination of this new hiking trail. 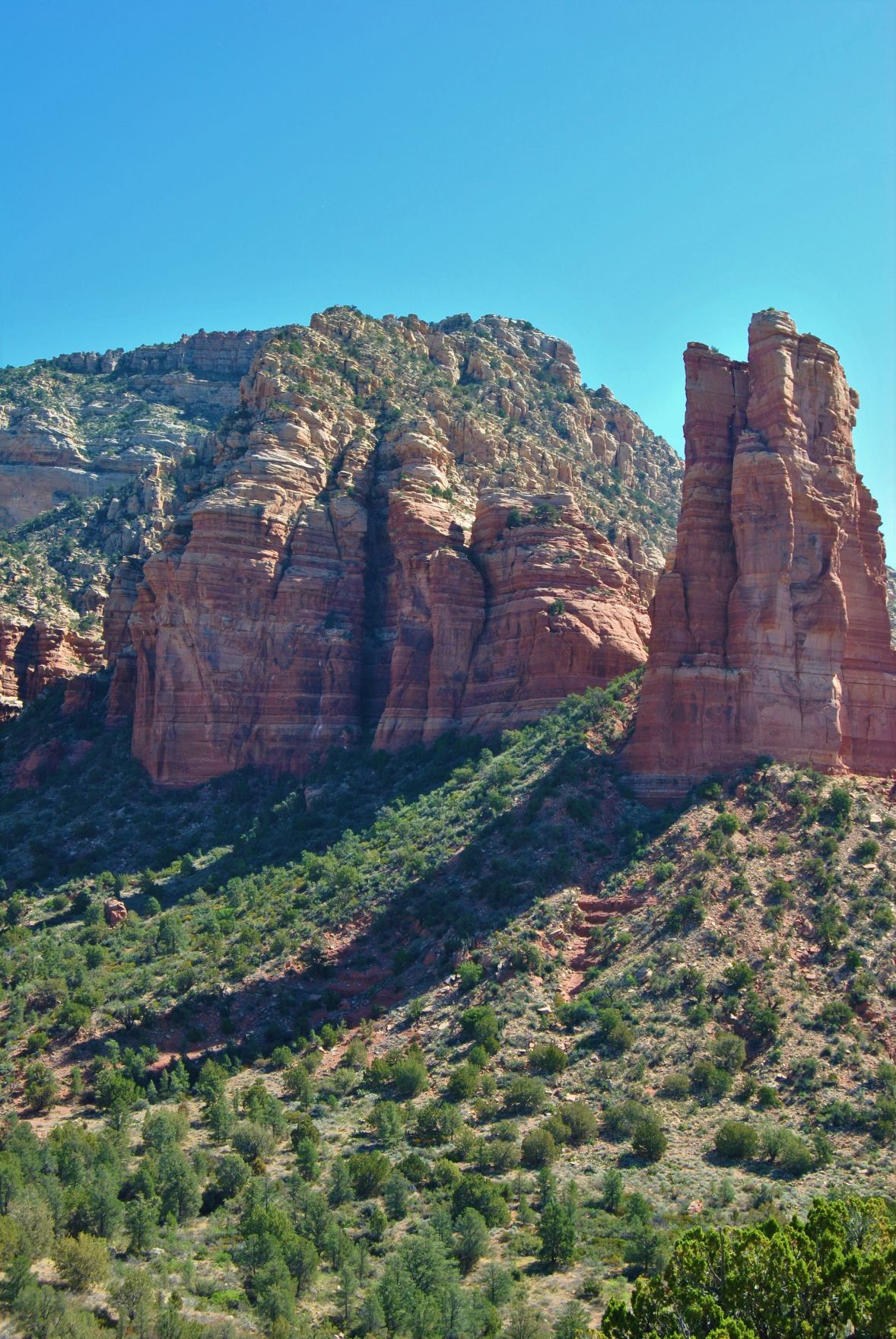 The red rock formation known as Rabbit Ears is also referred to as the Pinnacle by local climbers.

At a prominent point on the Rabbit Ears Trail, Courthouse Butte and Cathedral Rock come into view to the southwest.

A sign of the times with new trails coming into the Sedona area. 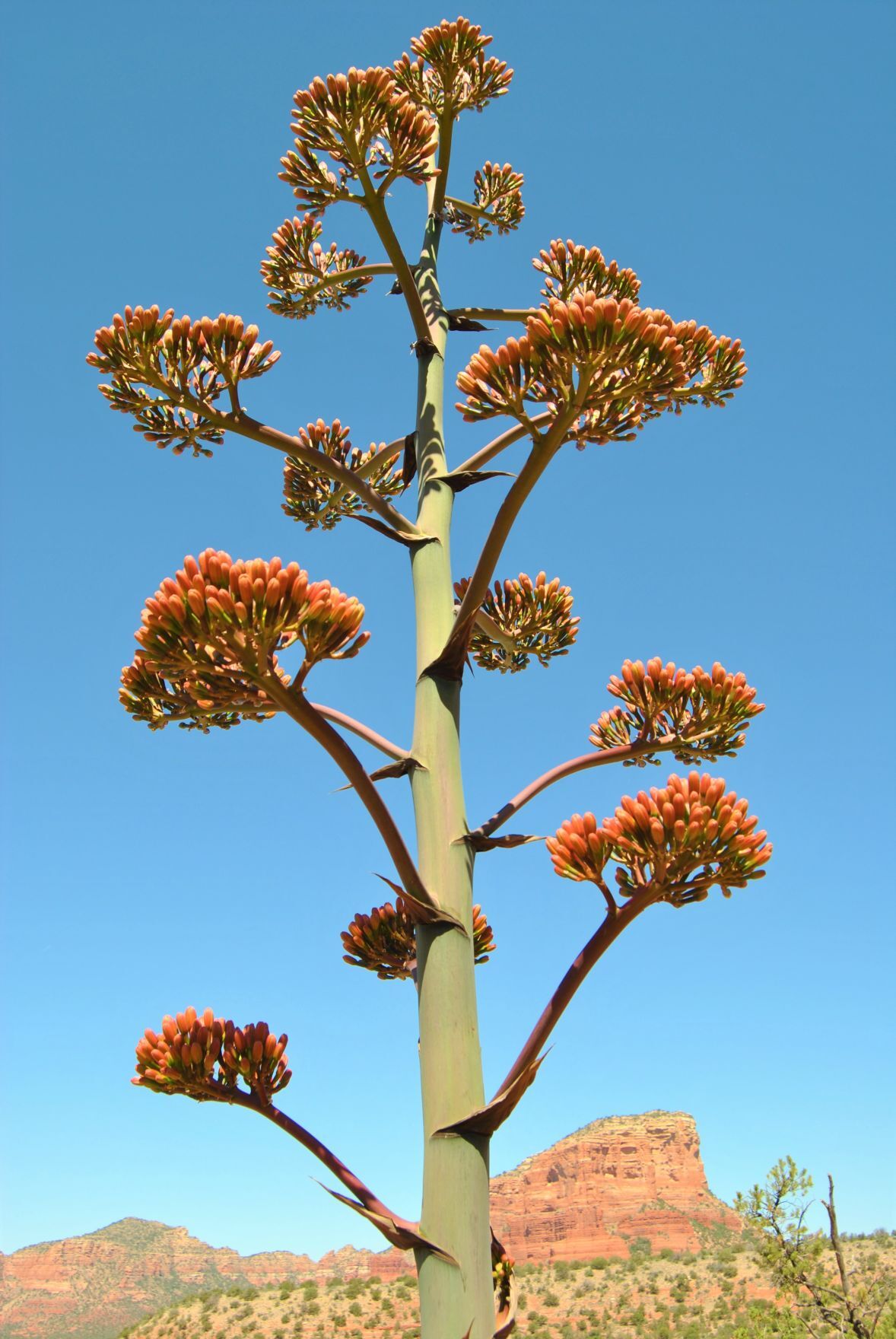 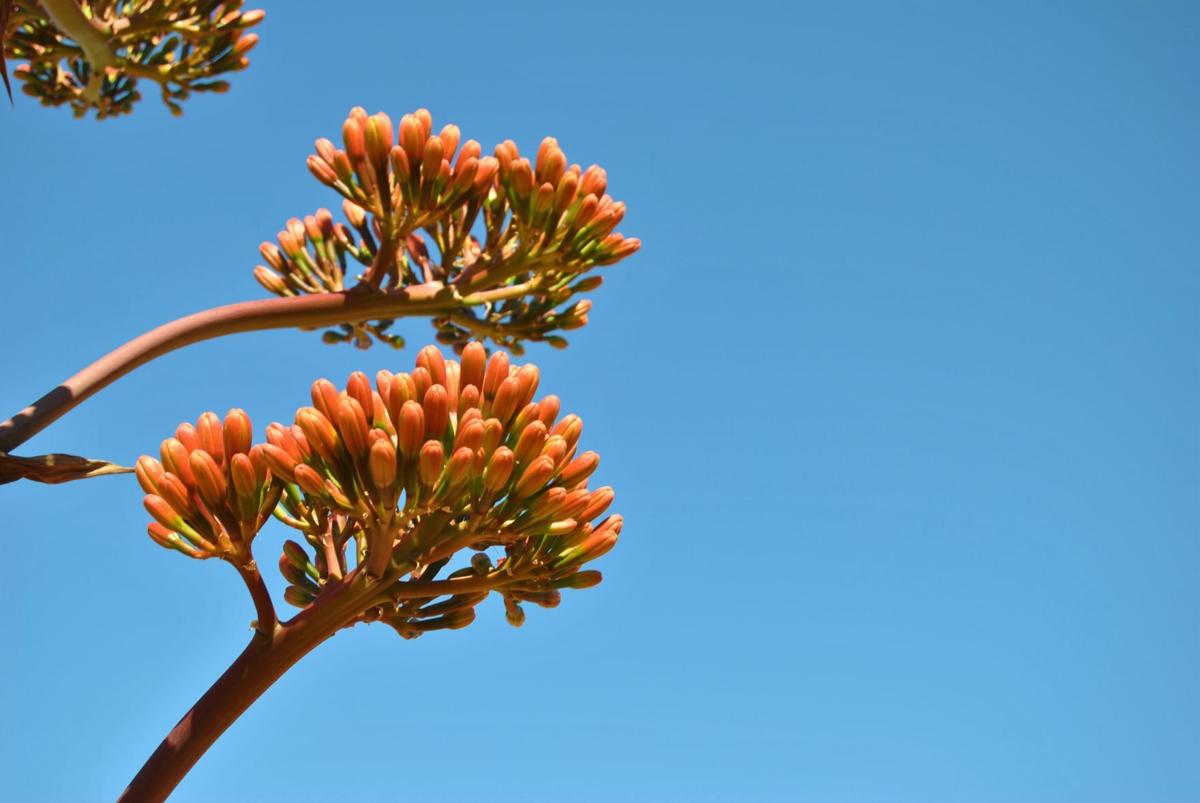 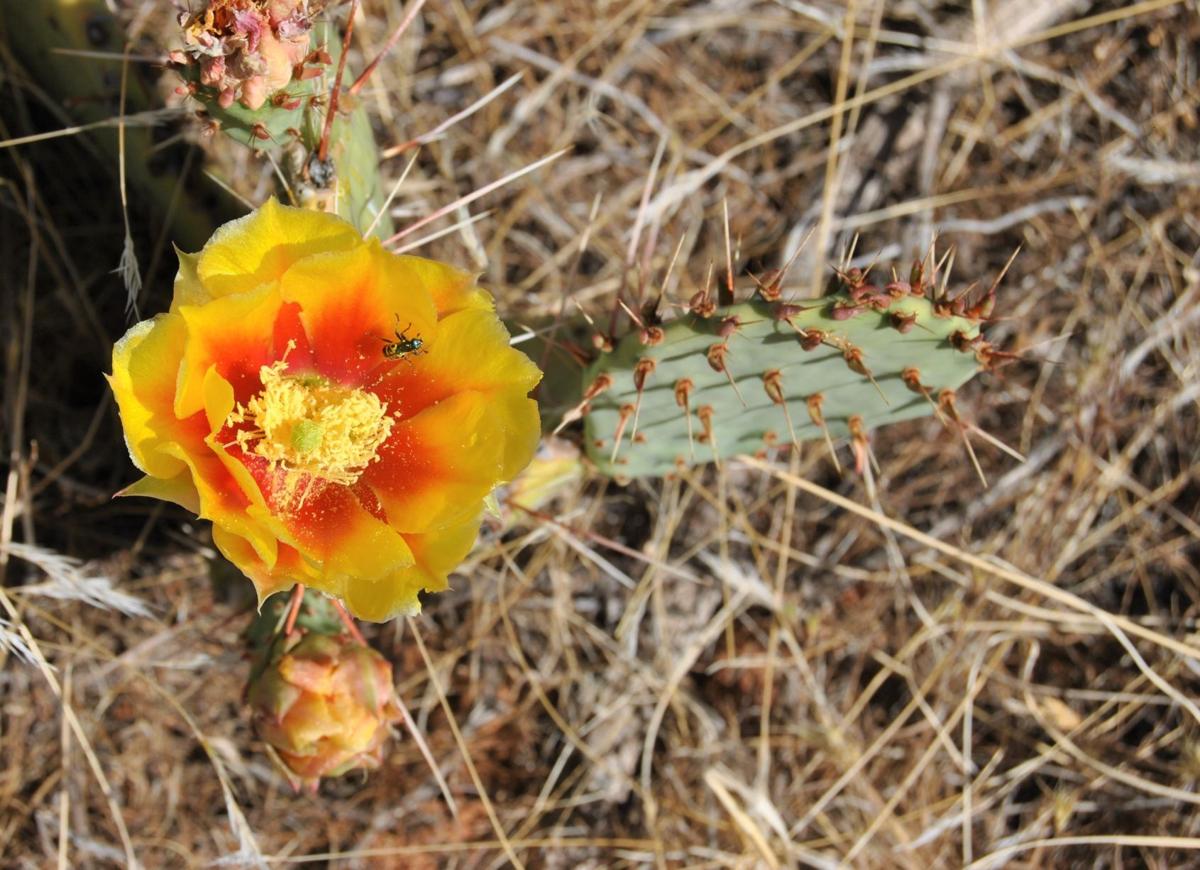 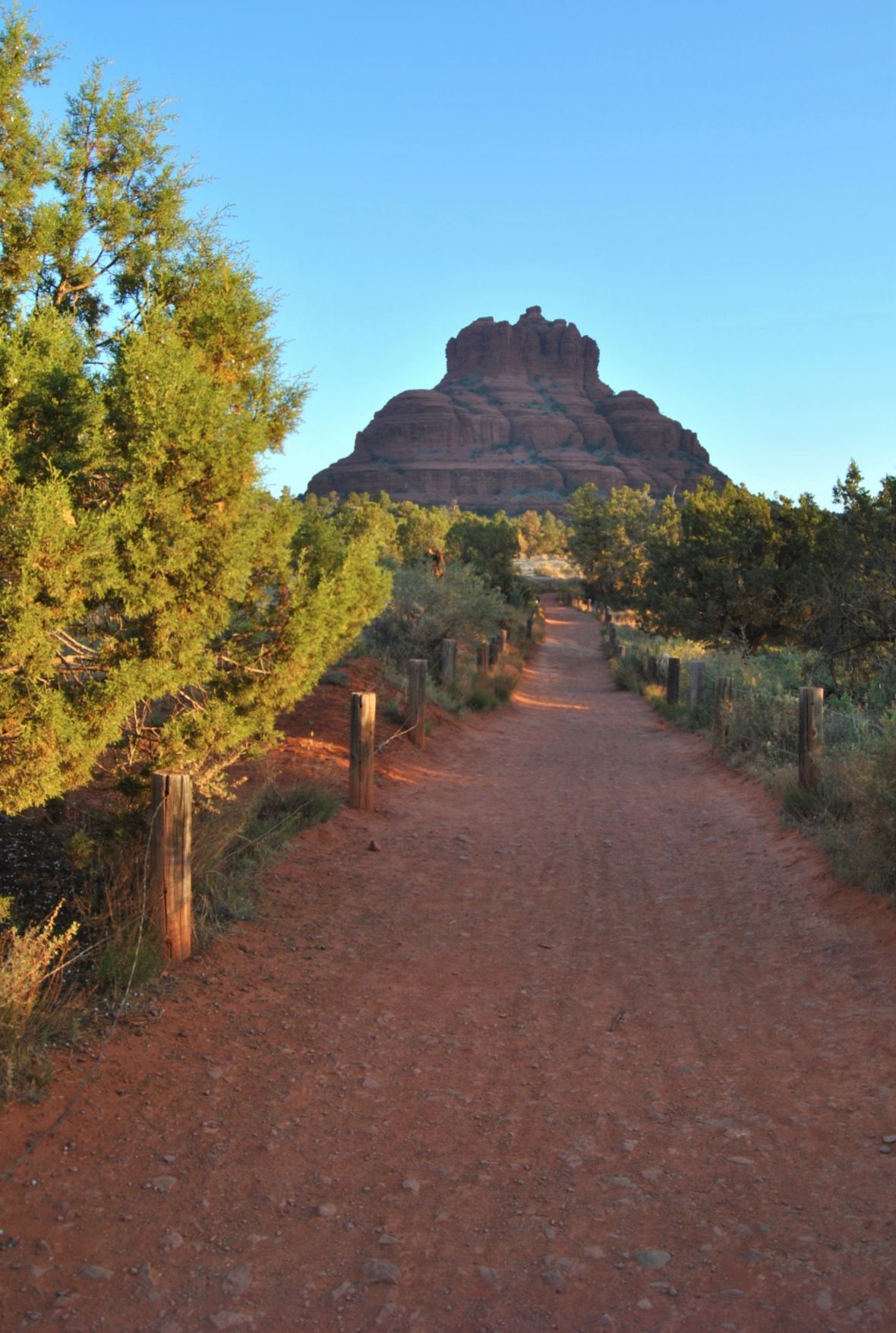 The new Rabbit Ears and Little Rock trails are part of the Big Park trail system, which includes the Bell Rock Pathway and several other routes and trail loops.

Story and photos by Seth Muller

Along a section of slickrock pads near the newly blazed Little Rock Trail in the Sedona Red Rock District, a century plant stood 12 feet tall in full bloom. I paused to examine its coloration, olive to pinkish orange, against a searing blue morning sky. With the lack of people and clamor seen on many Sedona area trails, I embraced the chance to quietly observe this century plant—also known as the sentry plant or Agave Americana—and its once-in-a-lifetime flowering among the charred orange sandstone.

The striking agave marks the kinds of moments to discover along both the Little Rock and Rabbit Ears trails, where the intersection of quietude and the natural world allow local hikers, bikers and equestrians to escape the usual crowds and drone of Sedona’s main attractions and pathways. Built this spring, the two trails offer a newer, more distant loop from the Big Park and Bell Rock circuits, while also connecting to them. They offer experiences to remind of the sublimity and solace of Red Rock Country.

On a recent May morning, I first hiked along a portion of the two-and-a-half-mile Rabbit Ears Trail to its modest summit point about halfway along the route. I joined Kyle Robb, trails supervisor for the Red Rock Ranger District of the Coconino National Forest. He, along with a handful of crew members and workers from the American Conservation Experience, spent six weeks marking out and developing the twin paths of Rabbit Ears and Little Rock. They found perfect routes in the hills and pinon-juniper forests east of Village of Oak Creek and south of Munds Mountain.

Along the route, I reveled in the spring desert bloom that included the showy reds of kingcup cactus, the tangerine globemallow and pockets of violet and velvety milkvetch. The trail picked up elevation and Munds Mountain came in fuller view to the north—along with its varying tawny cliffs and rocky steeples. As we reached the summit of the trail, the most prominent of the spires came into view: a towering, 350-foot-tall column that divides at the top and has earned the nickname Rabbit Ears. As a formation with an ascending route, local climbers call it the Pinnacle or Oak Creek Spire.

A few paces beyond the main view of Rabbit Ears, the vista opens to the north and west to reveal the back side of Courthouse Butte and, in the distance, the famed Cathedral Rock. This place on the trail’s map is one of its important highlights. It offers a chance to both look beyond to the rugged east of the Munds Mountain Wilderness Area and in the other direction with two prominent formations of the Sedona viewscape. This is all while having a lightly used trail that is both new and not in any way social-media famous.

I closed my eyes for a moment at a soundscape restored. I could hear the bees and insects buzzing around a nearby flower. Catch the flap of a raven’s wing. Notice the thoughtful silence between the shifts of wind. The realization came not as a condemnation of the people or the busier trails, but the understanding that routes such as Rabbit Ears and Little Rock have become necessary editions to the trail system. They allow an enriched connection to red rock country, in a way to notice its details, to connect with its interstitial moments and to listen to it speak in a clearer way.

Robb and I expanded our travels with a spur-hike part-way down and back on the adjacent Little Rock Trail, where we found the century plant and the pads of slickrock the trail snaked over and around. He explained how these trails checked the right boxes: they followed routes that were sustainable with limited erosion, they brought vistas and they had a strong line of sight where hikers, mountain bikers and equestrians can all see each other at an intermediate distance. The trails also expand the map of loops, as they are connected to the Big Park trail system to the west and can give mountain bikers and ambitious hikers an opportunity to expand their range.

These trails further provide an alternative experience to the extreme levels of visitation spiking along the Route 179, Dry Creek and Oak Creek corridors. Robb explained how Devil’s Bridge, a crowned and anointed social media destination these days, saw a record 33,000 visitors in March of this year. More than 1,000 visitors a day trekked out to the remote formation off Dry Creek Road, where visitors engage in the chance to photograph themselves atop the rocky span.

This and last year, the social media explosion for some specific destinations escalated visitation numbers in the time of the pandemic. With gyms, bars, movie theaters and other entertainment closed, more people have turned to outdoor experiences and destinations. This combines further with the limitations of international and island travel, lending greater appeal to regional destinations. Welcome to Sedona 2021—where an already desired and trafficked location has been amplified and grown into an even greater draw.

Luckily, for the local and the nature lover in search of the pristine experience, quieter stretches of trail have been added to the map. Robb also expects to see the Red Rock Ranger District further expand these quieter pathways with development in the more isolated Turkey Creek area near the end of Verde Valley School Road. The hope is to expand those kinds of experience to better remind visitors of the beauty and joys of the high desert landscape.

Length: Up to six miles

Where: Jacks Canyon Trailhead. Take Jacks Canyon Road out of Village of Oak Creek. At around two miles, make the right turn and drive up to the dirt lot. Trailhead is on the left.

Other: Red Rock Passes are required. Bring plenty of water, snacks and sunblock. Recommended as an early morning or late afternoon hike for the exposure.

NEW YORK (AP) — It started as just another January morning, the damp chill prompting a family on the third floor of a drafty Bronx apartment tower to run a space heater for extra warmth, as residents had done countless times before.

At the same time, the court is allowing the administration to proceed with a vaccine mandate for most health care workers in the U.S.

Hunters are trained to know their target, take careful aim, and be selective and precise before firing. Unfortunately, during public hearing a…

The red rock formation known as Rabbit Ears, adjacent to Munds Mountain, gave the new Rabbit Ears Trail in Sedona its namesake. It’s one part of the destination of this new hiking trail.

The red rock formation known as Rabbit Ears is also referred to as the Pinnacle by local climbers.

At a prominent point on the Rabbit Ears Trail, Courthouse Butte and Cathedral Rock come into view to the southwest.

A sign of the times with new trails coming into the Sedona area.

The new Rabbit Ears and Little Rock trails are part of the Big Park trail system, which includes the Bell Rock Pathway and several other routes and trail loops.